Thumbs up to Starks, down to pass defense

Thumbs up to Starks, down to pass defense

Green Bay Packers running back James Starks (44) tosses the ball in celebration after he scored on a 65 yard run in the first quarter against the San Diego Chargers at Lambeau Field.(Photo: Dan Powers/P-G Media/@powrpics)

The Packers go into their bye week exactly where they want to be: 6-0 and in the thick of the race (along with unbeaten Carolina) for the top seeding in the NFC playoffs. Now they have a chance to rest and recuperate before returning to action for one of their toughest assignments of the season: a Sunday night game Nov. 1 at Denver. The impending return of wide receiver Davante Adams could go a long way toward providing a deep threat and easing the Packers’ difficulties in stretching the field. Despite its struggles Sunday against the Chargers' Philip Rivers, the defense looks likes it's much more than just a complement to the Packers’ offense, giving Green Bay the kind of balance that could make for a long postseason run.

It came during the game's final meaningful drive (before Green Bay's game-ending kneel-down). Trailing 27-20 with two and a half minutes remaining, the Chargers advanced from their own 20 down to the Packers' 3, where they had a first-and-goal with 33 seconds left. Inexplicably, the Chargers twice tried to run it in on a day when the Packers couldn't stop their passing game. Danny Woodhead gained a yard on first down and, after an incomplete pass intended for Antonio Gates, Woodhead lost a yard on third down. On fourth-and-goal from the 3, Rivers tried to hit Woodhead in the end zone but rookie cornerback Damarious Randall knocked it away to preserve the victory. "Biggest play of the game," McCarthy said. "Damarious is off to a great start." At 6-0, so are the Packers.

Eddie Lacy is "banged up," McCarthy conceded after the game. That was clear Sunday when he didn't start and had only four carries for three yards. But it was James Starks to the rescue with 10 carries for 112 yards and a touchdown, and also a five-yard TD catch for the first two-touchdown game of his NFL career. His 65-yard TD run late in the first quarter, in which he ran into a wall on the left side of the line, reversed field and dashed down the right sideline, was the Packers' longest run of the season and it couldn't have come at a better time. The touchdown put Green Bay ahead 14-3 and helped hold off a furious Chargers comeback. 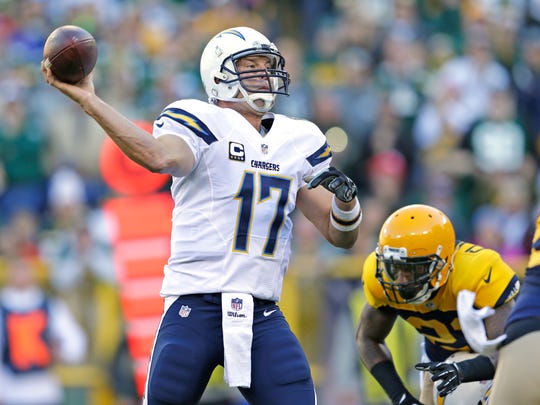 Green Bay’s pass rush needed to put more heat on Rivers. The Packers entered the game ranked second in the NFL in sacks with 20 after dropping the Rams’ Nick Foles three times, but Rivers proved much more difficult to corral. Despite lacking foot speed and playing behind a patchwork offensive line, Rivers sliced-and-diced the Packers' defense to the tune of 503 yards (on 43 completions in 65 attempts) and frustrated the pass rush by hitting short crossing patterns underneath. Then, when the Packers backed off a bit to defend the short pass, Rivers burned them on a couple of long bombs. It wasn't until the Packers shifted Clay Matthews to the outside and turned him loose in the pass rush that they finally were able to pressure the Chargers quarterback.

RAVE: Aaron Rodgers entered Sunday’s game looking to bounce back after an admittedly subpar showing against the Rams. Rodgers, who last week was intercepted at Lambeau Field for the first time in nearly three years (and was picked off twice at home for the first time since 2010), was steady if not spectacular. His 16 completions in 29 attempts for 255 yards and two touchdowns with no interceptions earned him an excellent passer rating of 107.7. Despite losing another receiving target to injury, Rodgers made the big plays when it mattered.

RANT: The Packers need to get some help for the receiving corps if Ty Montgomery is going to miss extended time with his ankle injury. Can Adams be counted on to come back strong from a sprained ankle, which are notorious for lingering all season? Seven receivers shared game-high honors in catches Sunday for the Packers, but given that they each only had two receptions, there's plenty of cause for concern. Jeff Janis showed promise with two catches and even earned praise from Rodgers ("He made two good plays") in his postgame media session.

RAVE: The Packers' special teams had a strong all-around day. Mason Crosby was 2-for-2 on field goals (hitting from 23 and 28 yards), Tim Masthay averaged 40.5 yards on four punts (two of which went out of bounds and pinned the Chargers deep), and the punt coverage team dropped Chargers returner Jacoby Jones for seven yards in losses on his two returns.

RAVE: It may seem odd to praise the Packers' run defense in light of the way Rivers dissected them through the air, but the Chargers' offense was rendered one-dimensional when Green Bay put the clamps on heralded rookie Melvin Gordon. The former Wisconsin star was held to 29 yards on seven carries and lost a fumble in the second quarter.

San Diego Chargers quarterback Philip Rivers (17) lies on the field after a fourth down play failed at the end of the game at Lambeau Field. Dan Powers/P-G Media/@powrpics
Fullscreen 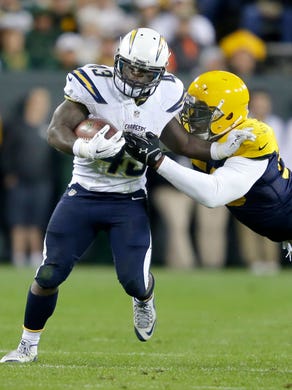 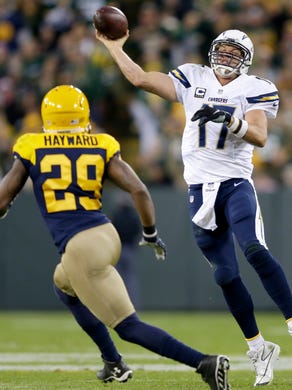 Green Bay Packers inside linebacker Clay Matthews (52) is slow to get up after a play against San Diego Chargers at Lambeau Field. Evan Siegle/P-G Media/@pgevansiegle
Fullscreen 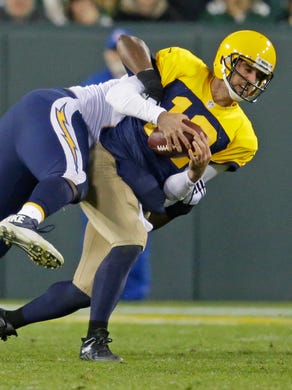 Green Bay Packers cornerback Casey Hayward reacts as a would-be interception is called by because of a penalty in the second quarter against the San Diego Chargers. Kyle Bursaw/P-G Media
Fullscreen 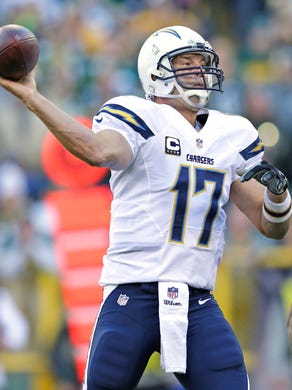 Green Bay Packers receivers Randall Cobb and James Jones check on Ty Montgomery after he was injured on a pass play in the second quarter. Wm. Glasheen/P-C Media/@WmGlasheen
Fullscreen 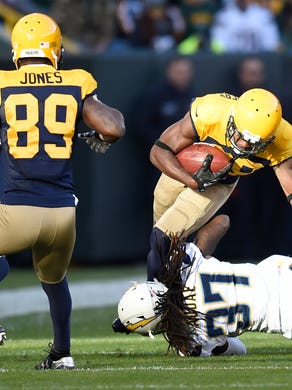 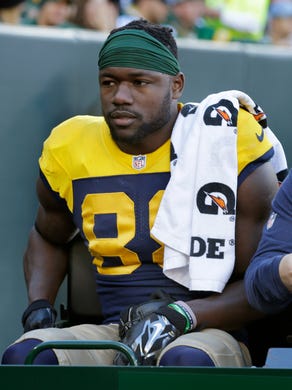 Green Bay Packers quarterback Aaron Rodgers (12) hands off to running back James Starks (44) in the first half against the San Diego Chargers. Wm. Glasheen/P-C Media/@WmGlasheen
Fullscreen

Green Bay Packers running back James Starks (44) tosses the ball in celebration after he scored on a 65 yard run in the first quarter against the San Diego Chargers at Lambeau Field. Dan Powers/P-G Media/@powrpics
Fullscreen

A Green Bay Packers cheerleader high-fives fans in the fourth quarter of the game against the San Diego Chargers at Lambeau Field. Kyle Bursaw/P-G Media/@kbursaw
Fullscreen

Green Bay Packers players make their way to the bench before the game against the San Diego Chargers at Lambeau Field. Kyle Bursaw/P-G Media/@kbursaw
Fullscreen

Green Bay Packers cornerback Damarious Randall, right, celebrates breaking up a pass on fourth down on a goal-line stand at the end of the fourth quarter against the San Diego Chargers at Lambeau Field. Dan Powers/P-G Media/@powrpics
Fullscreen

Packers fans sing along with Grand Union at Kroll's West before the start of the game as the Green Bay Packers host the San Diego Chargers. Wm. Glasheen/P-C Media/@WmGlasheen
Fullscreen

Tegan Davis, 10, of Chicago works on his throwing form while tailgating with his family before the game. The Green Bay Packers host the San Diego Chargers Sunday, October 18, 2015, at Lambeau Field in Green Bay, Wis. Dan Powers/P-C Media/@powrpics
Fullscreen

Brady Fuglister, 8, of Minneapolis, plays catch with his father while tailgating with friends and family off of Lombardi Avenue prior to the Packers-Chargers game. Dan Powers/P-C Media/@powrpics
Fullscreen

» Chargers receiver Keenan Allen was virtually unstoppable (14 catches for 157 yards), but he went out with a hip injury midway through the second half and the San Diego passing attack was much less efficient in his absence.

» The Packers have won 13 straight home games (including playoffs), the longest active streak in the league. It ties for their longest home streak under McCarthy (they also won 13 straight in 2010-11).

» Green Bay now has beaten San Diego seven straight times and leads the series 10-1. Their only loss to the Chargers came in 1984 by a score of 34-28 at Lambeau Field, when San Diego’s quarterback was Dan Fouts and Green Bay’s was Lynn Dickey.

» The Packers have scored in the first quarter in 22 straight games, the longest ongoing streak in the NFL.

» The Packers have won 10 straight October games at Lambeau Field (and 13 of their last 14). Overall, Green Bay has won 19 of their last 21 games in October, including all three this season.

» Randall Cobb extended his streak of regular-season games with at least one reception to 46 with a 12-yard catch in the first quarter.