Quick thoughts after the Packers' 27-20 win over the Chargers.

Every week I'll share four quick thoughts the day after the Green Bay Packers game. Here they are after the Packers' 27-20 win over the San Diego Chargers on Sunday:

First down: You only need to look at the stat sheet to see that the Packers had a terrible time corralling the resourceful Philip Rivers on Sunday. But they did make one key second-half adjustment that helped slow him down enough to pull out the 27-20 win. The Packers generally weren’t getting as much pressure on Rivers as they needed, so after Rivers took the Chargers on a 79-yard touchdown drive on his first possession of the third quarter that tied the game 17-17, defensive coordinator Dom Capers beefed up his rush by moving Clay Matthews to outside linebacker in his nickel defense. Up to that point this season Matthews had been staying at inside linebacker in the nickel, which is the defensive grouping the Packers use most.

But for the three series after that touchdown, with Matthews rushing from the outside, San Diego scored only a field goal. It wasn’t that Matthews dominated – he didn’t have any sacks. But he had a couple pressures, and the Packers’ rush picked up a notch after the move. Capers then went back to playing Matthews inside on the Chargers’ final drive, which ended when cornerback Damarious Randall knocked down a pass on fourth-and-3.

Second down: Speaking of Rivers, he has to be one of the most entertaining quarterbacks to watch in the NFL. Between his frantic gesturing and moving around while orchestrating his offense pre-snap and the obvious trash-talking he engages in, he has to be hoarse and exhausted after most games. Even from the press box you could regularly see him jawing with Packers defenders, including when he let the bench have it after one of his touchdown passes.

I talked to three Packers defensive players about Rivers’ trash talking, and none of them betrayed anything but respect for Rivers. “It’s all in fun,” said Julius Peppers, a former North Carolina player who played against Rivers when the quarterback was at North Carolina State. “He’s a competitive guy. It’s nothing personal. He’s been that way his whole career. There’s nothing to say about it, we don’t take it personally.”

Third down: Sunday’s game showed the big role that yards per attempt plays in the NFL passer rating formula. Rivers threw for 503 yards and had a 99.7 rating, whereas Aaron Rodgers threw for half as many yards (255) and yet had a 107.7 rating. Both had two touchdown passes and no interceptions. The difference was average per attempt, which is one of the better stand-alone stats for determining a quarterback’s playmaking and efficiency. Rivers threw 65 passes, so his average per attempt was 7.7 yards, which is only OK for an NFL passer. Rodgers threw only 29 passes, but his 8.8-yard average is getting toward the higher end of the scale. In yards per attempt, the difference of a full yard is huge.

Fourth down: For a rookie, Randall showed sophisticated instincts and serious guts on his game-winning pass breakup. With the Chargers down to their last play, fourth-and-goal from the 3 and down by a touchdown with 20 seconds to play, Randall had outside zone coverage. He initially was looking at tight end Antonio Gates lined up inside, but then he saw halfback Danny Woodhead circle out to the flat. I’ll let Randall take it from there: “I just stepped up a little bit. I was acting like I really wasn’t seeing him, but honestly I was just trying to bait (Rivers) a little bit. He actually threw a better ball than what I thought he could throw. I just knocked it down and made a play and we’re 6-0.” That takes genuine confidence for a rookie to try to risk baiting Rivers, an accomplished, 12-year NFL quarterback . 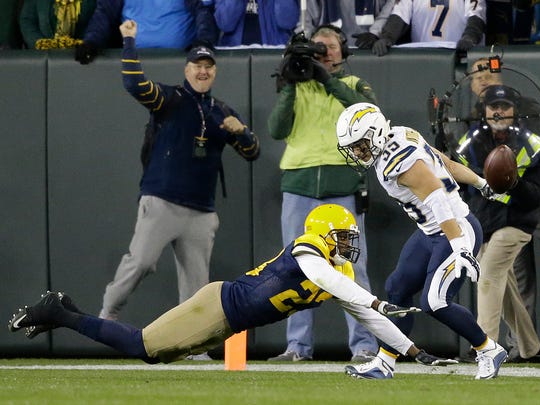