The offense fell to 28th in total defense after Sunday's 29-10 loss in Denver.

The Green Bay Packers have a lot to figure out regarding their struggling offense and less than a week to unearth answers.

The frustration has become evident for an offense that’s perennially been among the league’s highest-producing units under coach Mike McCarthy. After Sunday’s 29-10 blowout loss in Denver, however, the Packers fell to 28th in total offense (332.1 yards per game) and 27th in passing (210.1 ypg).

The NFL’s highest-scoring offense a year ago has averaged only 17.8 points over its last four games. That trend continued against the Broncos’ top-ranked defense, which held quarterback Aaron Rodgers to a mere 77 passing yards. Everything the Packers tried largely failed at Sports Authority Field.

After weeks of calling for his receivers to gain more separation, Rodgers reiterated in his postgame news conference the need for doing something different “schematically.” Inside the visiting locker room, right guard T.J. Lang emphasized the importance of increased creativity in a turnaround.

Packers' offense bottoms out against Broncos

McCarthy says he understands where his players are coming from, but also isn’t going to overreact to one game. Although it has been a grind for the Packers to establish any type of momentum since Jordy Nelson tore his anterior cruciate ligament in August, no one is panicking.

“I think it represents frustration,” McCarthy said. “The fact of the matter is, we’re not executing and being able to get more into the things you like to do. Offensively, you can say what you want, but I don’t know how many great days you’re going to have … we’ve had a couple in the past on the other side of it, but when you’re at 50 plays two weeks in a row, I know I’m not complaining about the scheme. There’s a lot more to be focused on.”

McCarthy made it clear he doesn’t plan on making any radical changes to the offensive structure. On Monday evening, many of his assistant coaches sang a similar tune despite the litany of challenges the Packers encountered against Denver, finishing with only 140 total yards and 46 offensive plays.

Something strange has happened since the Packers lost Nelson. Defenses have begun attacking Green Bay’s offense with press coverage. It’s a complete reversal from 2012 when teams kept two safeties deep to take away potential big gains.

Packers need to adjust on the fly

Green Bay Packers quarterback Aaron Rodgers (12) watches the scramble for his fumble which was recovered for a safety against the Denver Broncos at Sports Authority Field. Jim Matthews/P-G Media/@jmatthe7
Fullscreen

Green Bay Packers cornerback Quinten Rollins (24) favors his shoulder as he runs off the field after getting injured against the Denver Broncos during Sunday night's game at Sports Authority Field. Evan Siegle/P-G Media/@pgevansiegle
Fullscreen 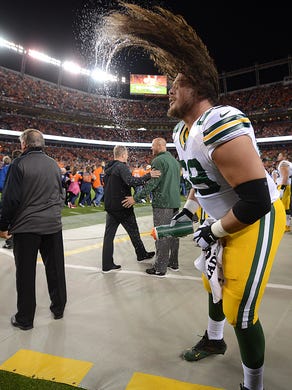 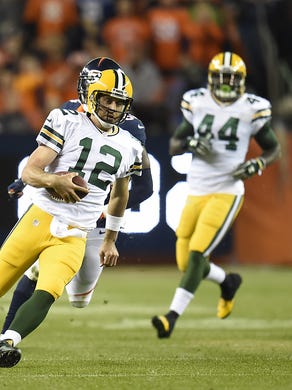 Green Bay Packers running back Eddie Lacy carries the ball in the first half against the Denver Broncos at Sports Authority Field. Evan Siegle/Press-Gazette Media
Fullscreen

It wasn’t until Eddie Lacy arrived that defenses started routinely dropping a safety into the box. On Sunday, Broncos defensive coordinator Wade Phillips neutralized the Packers with his modified 3-4 defense that substitutes a cornerback (Brandley Roby) in place of a safety to match up with three-receiver sets.

It was kryptonite for both the passing and running game. Lacy broke two double-digit gains, but he and James Starks were otherwise quiet. Outside, Denver’s secondary contained Randall Cobb, James Jones and Davante Adams, holding them to eight catches for an astonishingly low 37 yards.

The Packers understand what they’re putting on film. Until receivers can show they can beat press coverage, they likely will have to get used to seeing it.

“When any team gets ready to play another team and they watch the film and they see what was effective, if they feel they can emulate it they will try to do it,” offensive play-caller Tom Clements said. “It would not surprise me — it won’t surprise us to see similar-type defenses.”

The Packers have a possible deep threat who could take the top off defenses in second-year receiver Jeff Janis, but they don’t appear comfortable enough to use him in a consistent role. A lack of depth has contributed to the Packers running their popular three-receiver sets with primarily the same personnel.

McCarthy disagrees with the assumption the Packers have relied too heavily on scramble plays, which occur when Rodgers extends plays with his feet in hopes of making a big play downfield. The league’s crackdown on free plays hasn’t helped matters, but they still believe the explosive plays are there.

“Our players are good enough, our scheme is good enough,” offensive coordinator Edgar Bennett said. “We feel like we have everything in place. We’re still 6-1. We’ll continue to improve and we’ll certainly improve from Sunday night’s performance.” Packers will 'wait and see' on Matthews

The Packers eventually will get back rookie receiver Ty Montgomery, who missed Sunday’s game with a sprained ankle he sustained against San Diego, and tight end Andrew Quarless, who’s eligible to return from temporary injured reserve after Thanksgiving from his torn MCL.

Both are competent role players, but neither is seen as a game-changer. That was supposed to be Adams, who returned Sunday after missing three games with a sprained ankle. The expectation Adams could come in and make an immediate difference against the league’s top defense might have been unrealistic, but the Packers need any spark they can get.

Since general manager Ted Thompson is unlikely to make a move before Tuesday’s trade deadline, chances are the answer to the offense’s problems will need to come from in-house.

“We’re comfortable with the people we have,” Clements said. “They’re our guys. We like them. We didn’t execute as well as we would have liked yesterday or the last couple weeks. We haven’t been as successful. It’s a long season. That was one game. And we’re going to strive to get better.”

McCarthy speaks with optimism when discussing the offense, adding that he doesn’t want to “overreact or get outside of yourself and try to do different things.” The primary issue in his mind is the dearth of offensive plays and failure to convert on third downs. Execute and good things will happen.

The Packers’ problem Sunday was they picked a bad night to not score a touchdown in the first quarter after previously doing so in each of their last 22 regular-season contests. After trailing the entire game, McCarthy accepted blame for the Broncos playing faster out of the gate.

While the numbers don’t look pretty at the moment, his coaches remain confident in the scheme and direction the offense is headed. Special-teams coordinator Ron Zook has been through situations like these before during his time as the head coach at Florida and Illinois.

If Zook were in McCarthy’s shoes, he says he’d be handling matters the exact same way.

“It’s not broken. We’ll get it fixed,” Zook said. “The thing that is hard in the National Football League (is) there’s that much difference between playing up here where you want to play and not playing there. And obviously they were hitting on all cylinders with the energy and so forth and we weren’t."

Another test awaits this Sunday against the Carolina Panthers. This time, the Packers hope they will have a better solution.

“I think you just stay the course and correct the mistakes that you made," Zook said. "I know the way coach talked to us today, we know what we’re doing and these guys know what they’re doing and do we have to fix some things? Yeah. But I think a lot of times in games like that you learn more than a win."