3 things to watch at Vikings

Here are three keys to keep an eye on during the Week 11 game.

3 things to watch at Vikings 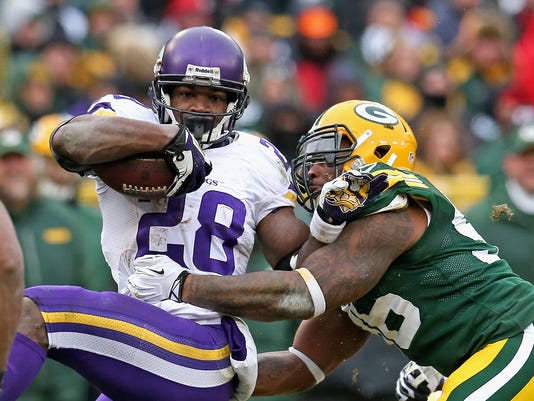 GREEN BAY, WI - NOVEMBER 24: Adrian Peterson #28 of the Minnesota Vikings is tackled by Mike Neal #96 of tyhe Green Bay Packers at Lambeau Field on November 24, 2013 in Green Bay, Wisconsin. The Vikings and the Packers tied 26-26 after overtime.(Photo by Jonathan Daniel/Getty Images)(Photo: Getty Images)

The Green Bay Packers’ one-year reprieve from Adrian Peterson is over. The six-time all-pro running back has returned from his 15-game suspension in 2014 and not missed a beat. Peterson, 30, not only leads the NFL in rushing yards (961), but he also has 200 more than second-place Chris Johnson. It has catapulted the Vikings back to the top in total rushing (147.2 yards per game) after finishing 14th a year ago. His production has made a significant difference for second-year quarterback Teddy Bridgewater, who has produced only nine touchdowns (seven passing, two rushing) in nine starts this season. The Packers held Minnesota to 172 yards on 42 carries en route to a pair of victories last season, but realize the game changes with Peterson back. He has rushed for 1,658 yards and 111 touchdowns on 302 carries (5.5 yards per attempt) in 14 regular-season games against the Packers. In his last meeting with Green Bay, Peterson racked up 146 yards on the ground in the infamous 26-26 tie at Lambeau Field on Nov. 24, 2013. Green Bay is 24th in rushing defense (116.2 yards per game) this season. “I’d probably say he’s the best back that I’ve played against,” linebacker Clay Matthews said. “There’s some very good ones in the league right now, but just overall his body of work and what he’s capable of doing, not only between the tackles but on the outside, too. He presents a problem for defenses.”

Packers coach Mike McCarthy says he has no plans to resume calling plays on offense, but admitted this week that he has started spending more time on the offensive side of the ball. A month-long slump has forced the Packers to put everything on the table. Some say it has been execution. Others point to a lack of creativity. Whatever the case, the Packers’ offense has been a large disappointment. Already struggling to gain separation, receivers dropped four critical passes in Sunday’s 18-16 loss to Detroit. To make matters worse, quarterback Aaron Rodgers (right shoulder) and four of his starting offensive linemen popped up on the injury report this week. Vikings coach Mike Zimmer is one of the only head coaches in the NFL who still calls his team’s defensive plays. His 4-3 system, known for its productivity with blitz packages, has caused trouble for Rodgers in the past. The NFL’s reigning MVP historically has handled the blitz well, but it recently has been a problem for the Packers with receivers struggling to beat press coverage. Like Carolina and Denver, Detroit frequently challenged the Packers to find an open receiver before five- and six-man rushes could get to Rodgers, who has been sacked 11 times and taken 28 hits during the team’s three-game losing streak. Any production the Packers can get in the run game from either James Starks or the returning Eddie Lacy (groin) will be appreciated. “We’ve seen it for the last several weeks, that teams have had success with it at times, and we’ve had success against it at times,” Packers play-caller Tom Clements said of the blitz. “It’s always a cat-and-mouse game. We’re ready for it.”

Stefon Diggs has come out of nowhere to emerge as Bridgewater’s favorite perimeter weapon. A fifth-round pick from Maryland, the 6-foot, 191-pound rookie has 30 catches for 507 yards and two touchdowns in six games. What makes him dangerous is that his combination of speed and size allows him to play both inside and on the perimeter without much drop-off at either spot. Quietly, the Vikings have amassed a respectable receiving corps with veteran Mike Wallace, Jarius Wright, former Packers seventh-round draft choice Charles Johnson and Cordarrelle Patterson, their 2013 first-round pick who remains one of the league’s top kickoff returners despite being largely an offensive disappointment. If Diggs keeps up his current pace, he’s on track to be Minnesota’s first 1,000-yard receiver since Sidney Rice in 2009. He’s also hard to bring down, with nine missed tackles forced in six games, according to Pro Football Focus. “He plays with a savvy of a veteran. He doesn’t play like a rookie,” cornerbacks coach Joe Whitt said. “He understands the nuances of grabbing and pulling, and how to gain the separation. He does a nice job. He understands how to cause missed tackles. He’s a lot like Golden Tate in that respect. Golden leads the league and I think he’s in the top 10 or somewhere around there.”