First down: If you're going to blame general manager Ted Thompson when the Packers lack quality depth at a position, you have to credit him when they have it, and it looks like they have it at center.

Every week I'll share four quick thoughts the day after the Green Bay Packers' game. Here they are after the Packers' 30-13 win at Minnesota on Sunday:

First down: If you're going to blame general manager Ted Thompson when the Packers lack quality depth at a position, you have to credit him when they have it, and it looks like they have it at center. When center Corey Linsley left the game in the first quarter because of an ankle injury, 2013 fourth-round pick JC Tretter replaced him, and if you didn't know about the injury you might not have even noticed the change. I still don't know if Tretter can play guard in the NFL – he's not naturally big framed even though he's 6-foot-4 and 307 pounds – but there's reason to think he's a starting-caliber center. An in-game change at that position can lead to a couple of false start penalties, communication errors or a bad snap or two. But Tretter wasn't noticeable at all, and like an umpire in baseball, that's good. "(Tretter) is as good as they come preparation wise," quarterback Aaron Rodgers said. "It's tough to lose Corey, he's such a rock for us inside, he's been so consistent and steady for us. But JC, we didn't miss anything mentally or physically."

Second down: The Packers' win Sunday showed yet again how much better their defense is when playing with a lead. From early in the second quarter on, the Packers led the Vikings, and for most of the second half that lead was double digits. That especially helped because the Vikings were behind by two scores every time they had the ball in the second half, and that meant they couldn't run Adrian Peterson as much as they'd have liked. But the biggest boon of playing with a lead is the way it unleashes the pass rush. The Packers didn't have a sack in their last three games, all losses in which they mostly played from behind. But they sacked Vikings quarterback Teddy Bridgewater six times and hit him at least four others.

Third down: It was surprising to see second-year tight end Justin Perillo get on the field for only a few snaps Sunday. Perillo had five catches for 58 yards and helped spark the Packers' inert offense in the fourth quarter of their loss last week against Detroit. I thought that would have set him up for playing time in place of Richard Rodgers this week, but he played only a few snaps and wasn't targeted for any passes. Rodgers had three receptions for seven yards. Maybe Perillo will get a better shot Thursday night against Chicago.

Fourth down: It's hard to know for sure until I re-watch the game, but at first blush it looked like the Packers' secondary had a good game overall as tacklers and blitzers. Safety Ha Ha Clinton-Dix sacked Bridgewater and cornerback Casey Hayward had a hit on Bridgewater on a corner blitz that caused an incompletion. Also, cornerback Sam Shields had an open-field tackle on running back Jerrick McKinnon on a third down in the first quarter that ended one drive, and Hayward made an open-field tackle on a swing pass to Peterson in the second quarter that prevented a second-and-20 play from rupturing. Also, safety Morgan Burnett forced Peterson's fumble early in the fourth quarter.

Green Bay Packers quarterback Aaron Rodgers (12) shouts instructions to his teammates at the line of scrimmage against the Minnesota Vikings at TCF Bank Stadium in Minneapolis. Evan Siegle/P-G Media
Fullscreen 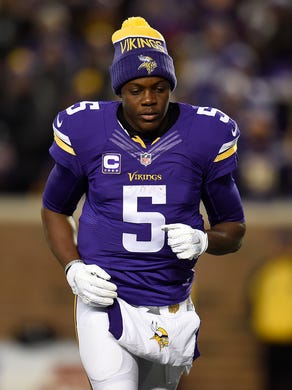 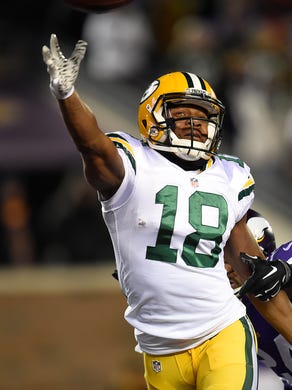 Green Bay Packers kicker Mason Crosby (2) is congratulated by his teammates after Crosby made a field goal against the Minnesota Vikings in the third quarter at TCF Bank Stadium in Minneapolis. Evan Siegle/P-G Media
Fullscreen 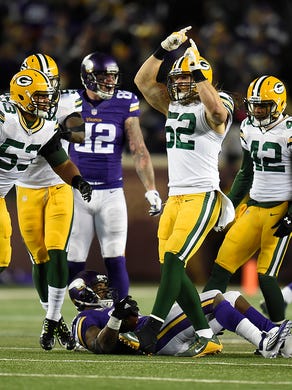 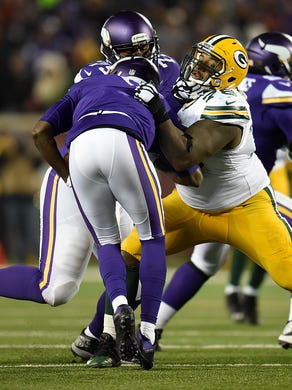 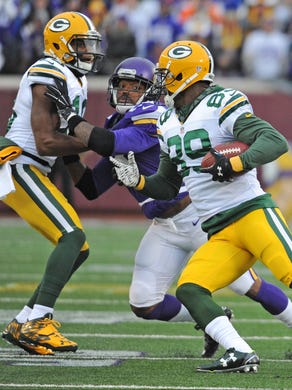 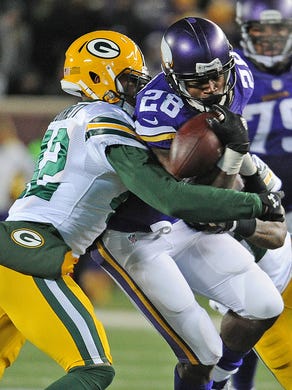 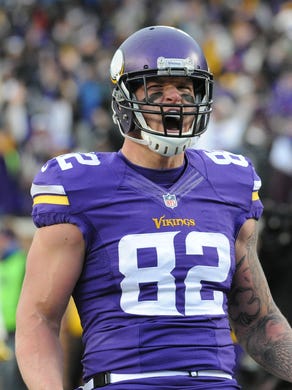 Green Bay Packers strong safety Micah Hyde (33) is taken off the field on a cart against the Minnesota Vikings at TCF Bank Stadium in Minneapolis. Jim Matthews/P-G Media/@jmatthe79
Fullscreen

Minnesota Vikings fan Karen Little of Edina, MN, right, is not quite as excited to see the Packers run onto the field for warmups as friend and Packers fan Leann Anderson of Sioux Falls, S.D., before the game between the Green Bay Packers and the Minnesota Vikings at TCF Bank Stadium in Minneapolis. Jim Matthews/P-G Media/@jmatthe79
Fullscreen