A look back at Super Bowl I

A look back at Super Bowl I 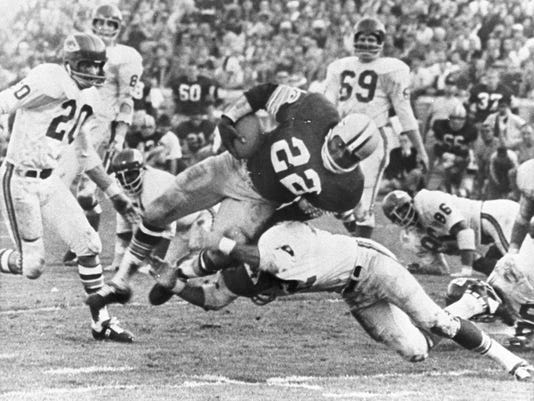 In this Jan. 15, 1967, file photo, Green Bay Packers' Klijah Pitts (22) goes over right tackle to the Kansas City Chiefs' five-yard line, for a six-yard gain before being brought down by Kansas City's Johnny Robinson in the fourth quarter of Super Bowl I in Los Angeles. Three plays later, Pitts went over for the touchdown. The Packers beat the Chiefs 35-10. Looking on are Chiefs Bobby Hunt (20) and Sherrill Headrick (69).(Photo: AP Photo/File)

Behind the passing of Bart Starr, the receiving of Max McGee and a key interception by safety Willie Wood, Green Bay broke open a tight game with three second-half touchdowns.

McGee had broken curfew the night before not expecting to play in the game. Instead, he came in when Boyd Dowler was injured early in the game and caught seven passes from Starr for 138 yards and two touchdowns. McGee had caught only three passes during the 1966 season.

Pitts ran for two scores and Jim Taylor, who led all rushers with 53 yards, scored the Packers' other touchdown.

Starr completed 16 of 23 passes for 250 yards and was chosen the most valuable player. The Packers collected $15,000 per man and the Chiefs $7,500 — the largest single-game shares in the history of team sports.

The game, called the AFL-NFL Championship, was not sold out at the Los Angeles Coliseum.

A look back at Super Bowl 2 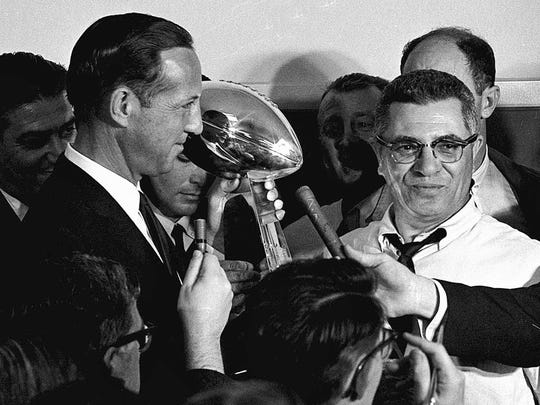