Packers' Cobb: Woodson 'one of my idols'

Packers wide receiver Randall Cobb looks ahead to Sunday's matchup against the Raiders.

Packers' Cobb: Woodson 'one of my idols' 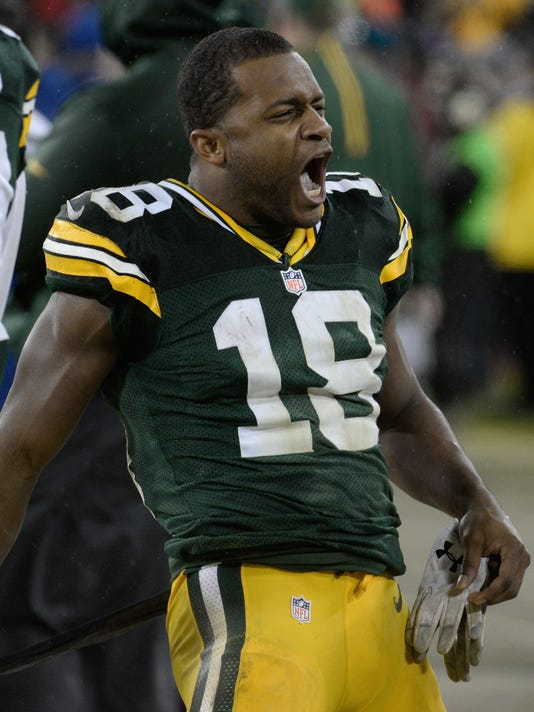 All of the preferred starters along the offensive line have battled injury this season. Being an offensive lineman can be a tough and thankless job, so what should people know about those guys that perhaps goes unnoticed?

RC: I think the biggest thing is you don’t really get to see their passion and how much they really care about what they do. They really take pride in their jobs, in the running game and keeping Aaron (Rodgers) protected. They take pride in that — creating those running lanes. They want to see rushing touchdowns. They want to see Aaron be able to sit back in the pocket for three or four seconds or however long he needs to get the ball out and keep him clean. They have a lot of passion. They really care about what they do. Josh (Sitton) and T.J. (Lang) leading that group. Over the years, I’ve definitely seen them become bigger leaders in their group and really having everybody come together.

The offense seems to be more consistent and efficient when fullback John Kuhn is on the field. Do you agree? How important is his influence on the field and in the locker room?

RC: He’s one of those veterans. He has that veteran presence, and he understands what we’re trying to accomplish as a team and as an offense. I think with his blocking habits, he has been doing that for a while. He creates lanes and holes for our running backs. And as far as leverage goes, he’s able to make those blocks to get the running back into the secondary. John’s been one of those leaders that we’ve had that everybody can lean on. And he has that understanding of what we’re doing.

The Raiders are 0-3 against the NFC North this season and have struggled at home, yet they’re coming off an impressive road victory against Denver. What’s the scouting report as you look to have success against a Raiders defense that held the Broncos to just 34 yards rushing, forced two turnovers and limited them to 22 percent (four-of-18) in third down efficiency?

RC: We like to keep it about us. They are a good defense. They’ve played well this season. Obviously not so much against the NFC North, but that stuff doesn’t matter. When it comes down to it, it’s about going out and playing football and focusing on that week. This week is going to be key for our preparation — making sure that we’re dialed into our preparation and having everything set in stone and ready to go. Our coaches are going to come up with a great game plan, and it’s going to be on us as players to go out and execute it.

Raiders defensive end Khalil Mack tallied five sacks against the Broncos and leads the league with 14 sacks overall. He has clearly emerged as one of the top pass rushers in the NFL. How do you counter the pressure he’s expected to bring?

RC: Like I just said in talking about our offensive line, they take pride in keeping Aaron clean. I know they’re looking forward to the opportunity to go against one of the best in the league. Our coaches will come up with a game plan and different schemes to be able to counter his attack. We’ll have to go out there and execute that.

Oakland safety and former teammate Charles Woodson is still playing at a high level at the age of 39. He has five interceptions on the season and is tied for the league lead in fumble recoveries with three. Mike McCarthy called him a “generational player.” How would you describe Woodson? And what did you learn from him during his time in Green Bay?