Insider: Thumbs down to ground game

The ground game went nowhere most of the game as the Vikings stacked their line and dared the Packers to pass.

Insider: Thumbs down to ground game

Green Bay Packers running back Eddie Lacy is tackled for a loss in the second quarter against the Minnesota Vikings.(Photo: Wm. Glasheen/P-C Media)

It seemed unthinkable after the Green Bay Packers won their first six games, but they will hit the road for the first round of the playoffs after losing Sunday to the Minnesota Vikings 20-13 and settling for a wild-card berth. Their consolation prize is a trip to Washington to face the Redskins, champions of the downtrodden NFC East, at 3:40 p.m. Central time Sunday on FOX. But Washington (9-7) has been on a roll, winning four straight games thanks to a high-powered offense featuring quarterback Kirk Cousins, wide receiver DeSean Jackson and tight end Jordan Reed. So the bad news: The Packers lost six of their last 10 and failed to win the NFC North. The good news: Green Bay (10-6) still could host the NFC title game if the Packers win at Washington and Arizona and the Seahawks win at Minnesota and Carolina.

With the Packers trailing 13-3 but driving in Vikings territory midway through the third quarter, Aaron Rodgers was stripped while attempting to pass and the fumble was recovered by Vikings cornerback Captain Munnerlyn, who returned it 55 yards for a touchdown to make it 20-3. It was a deficit this season's Packers offense could not overcome.

Eddie Lacy came in looking to rush for 100 yards or more against Minnesota’s defense for the fifth straight time, and Green Bay wasted no time feeding him. Lacy carried seven times for 28 yards on the Packers’ first drive, a 15-play, 70-yard march that consumed 8:43 (second-longest of the season) and produced a field goal. But the ground game went nowhere from there the rest of the half as the Vikings stacked their line and dared the Packers to pass. It was more of the same early in the second half as Lacy could find no running lanes and Green Bay failed to get a first down on their first two possessions, drawing boos from the Lambeau Field faithful. Lacy finished with 34 yards on 13 carries and James Starks could add only 24 on eight as the Packers finished with 76.

After Mason Crosby kicked an NFL-record five field goals of 40 or more yards in the Packers’ first game against the Vikings this season, the Packers had reason to hope for another notable performance from their special teams. And Crosby delivered again in a most unusual way, forcing a fumble on a long kickoff return by Cordarrelle Patterson that Micah Hyde recovered in the fourth quarter. With the Packers trailing 20-13, it gave them a chance to tie that ended when Rodgers was intercepted in the end zone.

RANT: Rodgers had owned the Vikings, winning nine of his last 10 starts against them entering Sunday night’s game. But it was a different story Sunday as Rodgers again struggled early to ignite the offense, with the Packers producing only three first-half points. He completed 10 of 14 passes in the first half, but for only 71 yards (5.1 average) as the deep passing game once again was missing in action. Rodgers was uncommonly inaccurate, overthrowing receivers on several occasions. He finished 28 of 44 for 291 yards, one TD, one interception and a passer rating of 80.8.

RANT: With left tackle David Bakhtiari (ankle) again inactive, the Packers shifted left guard Josh Sitton over to his spot protecting the quarterback’s blind side and inserted Lane Taylor at guard. The restructured line fared only a bit better in pass protection than last week at Arizona, when the Cardinals registered nine sacks. The Vikings took Rodgers down only once in the first half but kept the pressure on and prevented him from finding anyone open deep. In the third quarter, a costly holding penalty by center Corey Linsley negated a first down, and on the next play, Rodgers was hit by Everson Griffen while trying to pass and fumbled, with Vikings cornerback Munnerlyn returning it 55 yards for the touchdown that put Minnesota ahead 20-3. Rodgers was sacked five times on the night.

RAVE: The Packers’ run defense limited NFL rushing leader Adrian Peterson to 45 yards in the teams’ first meeting in November. In the rematch, Peterson again found the going slow in the first half, gaining only 30 yards on 11 carries (2.7 average). On the first drive of the third quarter, Peterson carried four times for 21 yards and a touchdown before leaving with a back injury. He finished with 67 on 19 carries.

RAVE: Green Bay’s pass rush registered six sacks of Minnesota quarterback Teddy Bridgewater in the Packers’ 30-13 victory in November, and they had two in the first half Sunday. On came in the form of a third-down take-down by team sacks leader Julius Peppers, which gave him double figures (10½) for the season. Clay Matthews also chalked up just his second sack since mid-October, giving him 6½. The Packers held Bridgewater to 10-of-19 for a paltry 99 yards and a passer rating of 45.7.

» The Packers got caught napping on the first drive of the game, when the Vikings surprised them with a fake punt that went for 41 yards and set up a field goal. And TimMasthay’s shanked 29-yard punt early in the third quarter put the Vikings in business on their own 42 and resulted in the game’s first touchdown drive.

» By losing to the Vikings at Lambeau Field, the Packers for the first time lost at home to division rivals Minnesota, Detroit and Chicago in the same season that they beat all three on the road.

» With the loss, the Packers fell to 4-1 all-time in regular-season home games in January.

» Despite failing to record a tackle in either of the two previous game, Packers linebacker Matthews came in needing just two tackles to surpass his previous single-season career high of 83, set in 2010. He got two solos and three total Sunday against the Vikings.

» With a 32-yard catch in the third quarter, James Jones surpassed his single-season career high with of 828 receiving yards, topping the mark of 817 he had with the Packers in 2013.

»  Randall Cobb extended his streak of regular-season games with at least one reception to 56 with a third-quarter catch for four yards against the Vikings. It’s the fifth-longest streak in Packers history and now is just two shy of fourth place (James Lofton, 58 from 1979-83). 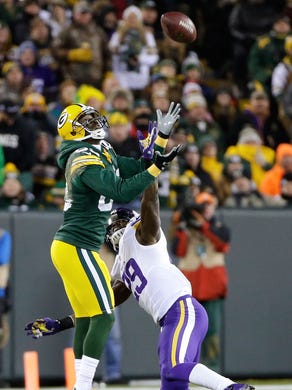 A pair of fans dance in the second half of the Packers-Vikings game. Kyle Bursaw/P-G Media
Fullscreen

Packers and Vikings players go up for a pass on the final play off the game. It was batted down incomplete. Kyle Bursaw/P-G Media
Fullscreen

Green Bay Packers running back Eddie Lacy (27) finds room to run while Minnesota Vikings cornerback Captain Munnerlyn (24) tries to wrap him up in the second half. Kyle Bursaw/P-G Media
Fullscreen

A fan expresses his frustrations in the second half as the Packers take on the Vikings at Lambeau Field. Kyle Bursaw/P-G Media
Fullscreen

Green Bay Packers wide receiver James Jones (89) looks up as a ref picks up a penalty flag in the second half against the Minnesota Vikings. Kyle Bursaw/P-G Media
Fullscreen

Packers fans in the second half of the Week 17 game vs. the Vikings. Kyle Bursaw/P-G Media
Fullscreen

Packers and Vikings players go up for a pass on the final playof the game. Kyle Bursaw/Press-Gazette Media
Fullscreen

Green Bay Packers tight end Richard Rodgers bobbles the ball on third down during the second quarter against the Minnesota Vikings at Lambeau Field. The play was ruled a catch, but Rodgers was short of a first down. Dan Powers/P-G Media/@powrpics
Fullscreen

Green Bay Packers running back Eddie Lacy is tackled for a loss in the second quarter against the Minnesota Vikings. Wm. Glasheen/P-C Media
Fullscreen 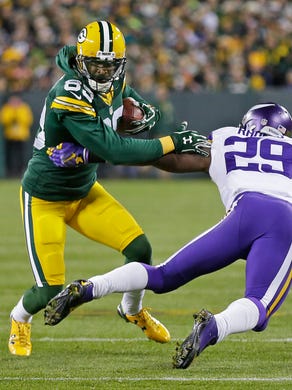 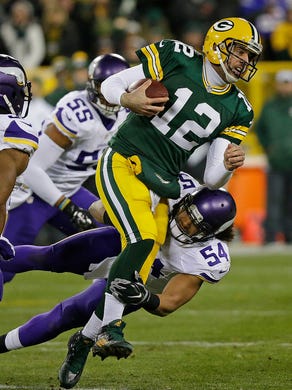 Kendra Conrad-Kopp and Jen Rogness embrace before the game while tailgating outside of Lambeau Field. Kyle Bursaw/Press-Gazette Media
Fullscreen

Pat Ryan, left, of Osakis, Minn., tailgates with his Viking friends Sue and Allen Edwards of Alexandria, Minn., prior to the start of the Packers game. Dan Powers/P-C Media
Fullscreen

Carl Manteau, left, of Waukesha enjoys a beer while waiting for a brat grilled by Tom Garibaldi of Dousman as they tailgate before the Packers game. Dan Powers/P-C Media
Fullscreen