Each week, Press-Gazette Media will look at national stories involving the Green Bay Packers and their opponents. 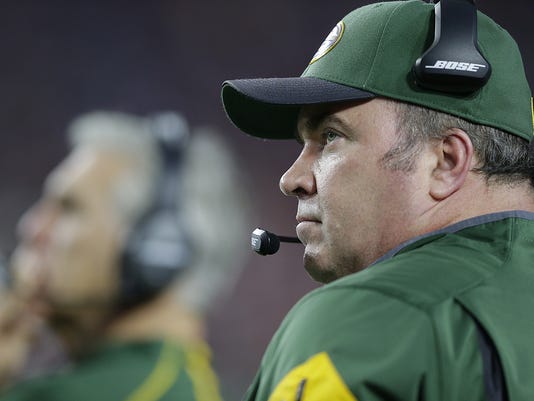 Green Bay Packers coach Mike McCarthy looks on from the sidelines in the fourth quarter against the Arizona Cardinals at University of Phoenix Stadium.(Photo: Evan Siegle/P-G Media)

Each week, Press-Gazette Media will look at national stories involving the Green Bay Packers and their opponents.

The Packers see their playoff opener at Washington as the next stop on a “hero’s journey,” writes Kent Babb of the Washington Post. As a motivational device, coach Mike McCarthy divided the season not into four quarters as NFL coaches are prone to do, but rather in the three stages of the “monomyth,” Babb writes: the first six games (comfort), the next six (challenge) and the last four (redemption). But as Babb observes, the Packers didn’t emerge “from their most challenging stretch as a stronger, more self-aware group. They had been left beaten and scarred, with doubts about whether the team — 6-0 seems like so long ago — was even playoff-worthy.”

In placing the Packers 13th in his final “Fine Fifteen” rankings (the lowest of the 12 playoff teams and also below the New York Jets), Peter King of MMQB.SI.com writes that Green Bay “doesn’t need a road trip to Washington right now. It needs a back-to-basics offseason.”

The Packers and Redskins share ties to the legendary coach whose name graces the Super Bowl trophy, writes David Maraniss of the Washington Post. In leaving Green Bay to become head coach in Washington, Vince Lombardi “exposed a sham philosophy — how the concept of loyalty was manipulated by those in sports who had the power to come or go, hire or fire. Here was the issue that would shape the NFL and other major professional sports from then on.”

After finishing 10-6 and being forced to hit the road for the first round of the playoff, Green Bay has only a 3 percent chance of winning the Super Bowl, according to the folks at Fivethirtyeight.com. That’s down from 5 percent last week and a high of 19 percent back when the Packers were 6-0. Carolina is given the best chance (20 percent), followed by Arizona (17 percent) and Denver (15 percent). Bringing up the rear are Washington and Houston (each at 1 percent).

The biggest issue with the Packers’ struggling offense is that “the receivers aren’t fast and there is little creativity to help them get open,” writes Pete Prisco of CBSSports.com. “The Packers have a system that uses mostly isolation routes, which means the receivers have to beat their man coverage with their speed and their ability to run routes, rather than help from a pick or a rub or a bunch formation.”

The Washington Redskins have a group of star players who are obsessed with spending as little money as possible, writes Kevin Clark of the Wall Street Journal. “Maybe someday I’ll have enough saved and I’ll see what I can get,” said quarterback Kirk Cousins, who drives a dented GMC Savana passenger van. “But it’s better to buy appreciating assets than depreciating. No yachts, no sports cars.”