Offensive tackle Chad Clifton, safety Nick Collins and former broadcaster Russ Winnie will be honored at the 46th Hall of Fame induction banquet on July 23 in the Lambeau Field Atrium.

Clifton, a second-round draft pick in 2000, appeared in 165 games in his 12-year career — the second most games played by an offensive tackle in franchise history, behind Forrest Gregg’s 187. He was selected to the Pro Bowl twice (2007 and 2010) and played on eight playoff teams, including the 2010 squad that won Super Bowl XLV. 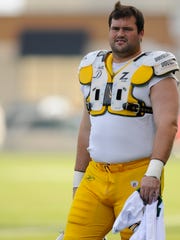 Collins, a second-round pick in the 2005 draft, played seven seasons for the Packers, earning three Pro Bowl selections (2008-2010). He finished his career with the team with 21 interceptions, including one returned for a touchdown in Super Bowl XLV. The touchdown game the Packers a 14-0 lead in their eventual 31-25 victory.

Winnie broadcast Packers games for 18 years (1929-1946). During his tenure the Packers won six NFL championships. He also broadcast Wisconsin Badgers football for 16 of those years. He died in 1956 at age 49.