Packers receiver sits down for Q&A about his knee, offensive struggles and more

Packers receiver Jordy Nelson sits down with USA TODAY NETWORK-Wisconsin to discuss his rehab from a torn ACL injury and his season on the sidelines. (Jan. 19, 2016) 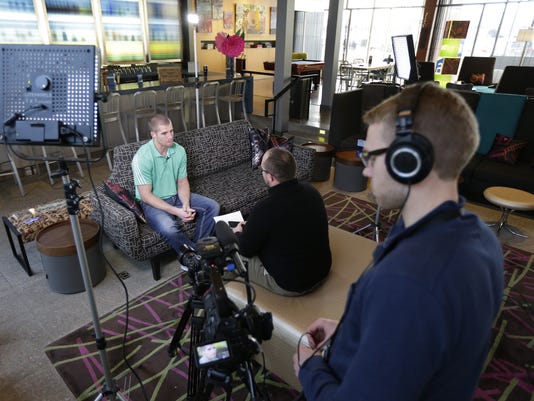 Five months after tearing his ACL, Green Bay Packers receiver Jordy Nelson is gradually getting himself ready for an important offseason.

After missing the entirety of last season, Nelson hopes to continue where he left off in 2014, when he was named to his first Pro Bowl. Nelson sat down with USA TODAY NETWORK-Wisconsin on Tuesday for a 15-minute interview, part of a media tour to promote his partnership with Dove Men+Care. In the following transcript, Nelson speaks about the Packers’ offensive struggles, his fellow receivers, how long the team’s championship window can remain open and more.

Nelson will 'definitely be ready' for camp

Q: Everyone knew it would be a struggle when your season ended in August, but were you surprised at how much of a struggle it was for the offense?

A: I think it just varied week to week. I mean, they started out 6-0. We were productive, had some big plays. James (Jones) had a huge impact for us, but then I think just the season unfolded, had the ups and downs and just kind of got out of rhythm. Got back into it at the end of the year, I think a little bit. We were productive, and then the playoff games went very well. Especially looking at (Jared) Abbrederis, he was starting for us and was on the practice squad at the end of the year. So that’s a huge difference, but him and Jeff (Janis) came through and made some big plays and were great for us. It was awesome to watch them play.

Q: Why do you think the offense struggled so much this past season?

A: I think there were multiple things. There was a lot of change on the third floor with different things. We had a lot of different injuries throughout the year. Nothing serious, but a lot of things where a guy missed a game here. I mean, (the injuries) went from Davante (Adams) to (Bryan) Bulaga to (David) Bakhtiari and then back to Davante. I think Eddie (Lacy) even missed a game. So there was a lot that was going on back and forth, Randall (Cobb) going out in the last game. So that just constantly changed something almost every week. It’s part of the game. Usually, we adjust very well to those things, but I think this year we struggled a little bit with that. At the end of the day, we were in the playoffs. We were one play away from making it in the championship game, and who knows what would happen there. At the end of the day, we were right where we needed to be in the playoffs with a shot, and we had it and just didn’t make enough plays.

Q: Aaron Rodgers talked all season about the process of trust with receivers. Why do you think there were more chemistry struggles this season between him and receivers in years past?

A: They’re young guys. I mean, besides James and Randall, everyone is two years and under. I think that’s the impact. There’s a lot of time, it takes three, four or five years to fully get that trust. You’re having those guys playing a lot of downs, a lot of plays in key moments, and it takes time. You need the practice reps, you need the years just to accumulate. You need the meetings to accumulate, and that will happen.

Q: How proud are you of Jared and Jeff coming through in the Arizona game when there was nobody left behind them?

Q: It was under unfortunate circumstances, but was it fun to have James Jones back this season?

A: Absolutely. If there’s one positive out of all this, it’s having him back and having his whole family back, and hanging out with him and getting him back here in Green Bay to play for us. Hopefully, we can get him back for another year or so, and just continue to make this run. But, yeah, it was great having him and Tamika and all the boys back. We missed them for that year.

Q: How much would you like to be on the same field with him again?

A: Absolutely. I mean, that’s the ultimate goal. We want the best guys on this team. We want to make a run at this, and obviously he can help us out. We would be extremely deep at the position if everyone came back healthy, but there’s nothing wrong with competition.

Q: You and Randall work so well as a tandem. He had some struggles this season without you on the field. Did you see a lot of those openings underneath disappear for him?

A: Maybe a little bit. I didn’t get too much into the game field and understanding how defenses were trying to play him, for the most part. That would take some more studying on my hand, but obviously they try to take away our best receiver, and he was our best receiver this year. They really focused in on him and bringing extra guys and bringing pressure and everything else. Again, he’s a great player. He can make the plays, and he’ll be right back at it next year.

A: I think there is every year. Everyone thinks once you win one, everyone is going to back off. But you have that feeling, you want another one immediately. We’ve been close, we’ve won it, and we’re going to do everything we can to get another one. They’re hard to get, no doubt. Every year we don’t get it, it makes me appreciate the one we’ve got.

Q: How long can this window stay open?

A: That’s the unknown. This game can take it from you quick.

Q: What do you want people to know about your partnership with Dove?

A: We were able to partner with Dove Men+Care and go out and show a highlight reel of what we believe is real strength. A lot of people see us as football players, obviously, and the highlights we have on the field and the strength we have on the field, taking hits and everything. But to us, real strength is care. Caring for your family, caring for people in the community, giving back. So that’s what we’ve been able to do, create a little highlight reel of different things. It was fun, and I think it’s been a good day today. It’s been taking off, so it’s been great.