This is Part 2 of a 10-part series grading the Packers players and coaches. Today, we grade the running backs. 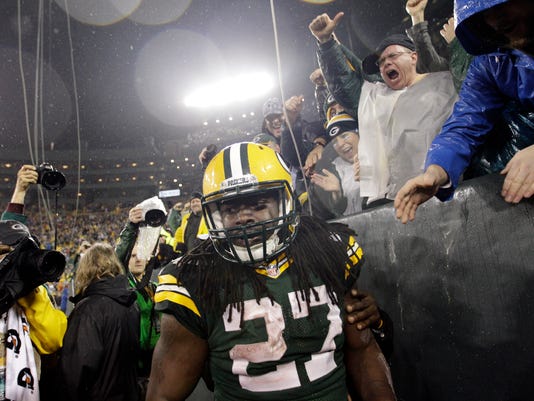 The last thing the Green Bay Packers needed this season was for Eddie Lacy to take a step back.

From the start, it was going to take an all-hands-on-deck mentality to compensate for the loss of Pro Bowl receiver Jordy Nelson to a torn anterior cruciate ligament. The Packers looked to their bell-cow back who single-handedly morphed the ground attack into one of the offense’s biggest strengths.

Another big year could have been a catalyst for the offense in overcoming Nelson’s departure, but Lacy wasn’t up to the task. Coming off back-to-back 1,100-yard seasons, Lacy returned from the offseason out of shape and it sabotaged his season.

A credit to his natural ability, the 25-year-old running back still managed to rush for 758 yards and three touchdowns on 187 carries (4.1 yards per attempt), but Lacy lacked the burst and explosiveness that made him the NFL’s offensive rookie of the year in 2013.

Grading the 2015 Packers by position

Coach Mike McCarthy defended Lacy at every turn this season. Even when it was apparent his running back was probably 20 pounds over his listed weight of 234, McCarthy stood in front of the media and pointed to a larger plan with a platoon approach between Lacy and veteran James Starks.

Slowly, McCarthy was worn down. He finally acknowledged Lacy was “bigger than he was as a rookie” on Oct. 29. Two weeks later, he proclaimed Starks the starting running back after Lacy rushed for only 10 yards on five carries against Carolina.

When it looked like Lacy finally was gaining momentum after back-to-back 100-yard games against Minnesota and Chicago, he and backup running back Alonzo Harris missed curfew the night before a Dec. 3 rematch against the Lions. Harris was released the next day and Lacy touched the ball only six times.

His 61-yard carry easily would have gone for a touchdown during his first two NFL seasons, but the Cardinals’ secondary ran him down inside Green Bay’s 10. In the days after the 26-20 overtime loss in Arizona, McCarthy called out Lacy for his conditioning and fired his position coach, Sam Gash.

The Packers finished the year 12th in total rushing, but that ranking drops to 19th if you take out yards gained by quarterback scrambles.

“Eddie’s commitment obviously has to go way up in the offseason,” McCarthy said on his season-ending coach’s show. “He needs to come back ready to play because it obviously didn’t happen this past year.”

Eddie Lacy’s roller-coaster season led to more opportunities trickling down to Starks, who enjoyed the most touches (191) of his six-year NFL career. The 6-foot-2, 218-pound running back has worked hard to stay healthy and keep himself in peak form. The effort has paid off with Starks having now played in 47 consecutive games for the Packers (including playoffs) after seeing the field in only 30 of his first 61 NFL games. Starks always ran with power and precision, but the improvement he made in the passing game was substantial. Once seen as a liability in pass protection, Starks showed better awareness and toughness against the blitz. Starks’ three pressures allowed (one hit, two hurries) in 77 pass-block snaps was second in the NFL only to Pittsburgh’s DeAngelo Williams. Along with a career-high 601 rushing yards, Starks became a legitimate weapon as a pass-catcher. He was a safety valve for a struggling passing offense, finishing the year with career-highs in receptions (43), rushing yards (392) and touchdown catches (three). Starks’ biggest issue was holding on the football. He fumbled as many times (five) this season as he had in his previous five seasons combined with three lost. His four rushing fumbles tied for third-most among NFL running backs. His fumble coming out of halftime against Arizona in Week 16 completely deflated the Packers, who quickly saw a 17-0 deficit turn into a 38-8 onslaught. Starks didn’t make many defenders miss and was largely hit-or-miss with seven games in which he was held under 3.0 yards per carry. He turns 30 next month, but still seems explosive out of the backfield.

Perhaps the only thing more surprising than Lacy’s regression in his third professional season is how well he played at times despite not being in top football shape, a prerequisite for most running backs in today’s NFL. He played himself into shape in 2014, but the same didn't hold true in Year 3. He came on late in reeling off three 100-yard games in four games between Nov. 22 and Dec. 13. During that stretch, however, Lacy blew curfew in Detroit, resulting in him receiving only six first-half touches against the Lions. If the Packers hadn’t chosen to release rookie Alonzo Harris for the same incident, they likely would have benched Lacy completely. Lacy, playing about 20 pounds overweight, was banged up for most of the season. He sprained his ankle against Seattle and then suffered a groin injury that hampered him in the middle of the season. His spin move in traffic remains a sight to be seen, but Lacy seemed slow out of his breaks and struggled to hit the hole as fast as in previous campaigns. Lacy was one of the scariest running backs to go one-on-one against in his first two seasons, forcing 73 missed tackles on 287 touches last season. He produced only 30 missed tackles on 207 touches in 2015, according to Pro Football Focus. He failed to rush for more than 30 yards on any of his 187 regular-season carries and finished with only five touchdowns after reaching the end zone 24 times in his first two years. He demonstrated toughness when he rushed for 152 yards and a touchdown in the playoffs despite playing through a rib injury that needs the offseason to heal. Lacy is a fun-loving individual who is well liked by his teammates, but he did the team a disservice by not coming back in the best shape of his career last summer. The Packers fired running backs coach Sam Gash, but the biggest motivation for Lacy should come in a contract year. Given the nature of his position, this likely will be Lacy’s one chance to break the bank in free agency. The Packers can’t afford to spend a high-round draft choice on a running back and are counting on Lacy to return in the spring with renewed commitment and a better sense of purpose. Crockett, one of Green Bay’s top undrafted free-agent signings, fell behind early when a sprained ankle he sustained in mini-camp landed him on physically unable to perform at the start of training camp. He returned in time to play in all four preseason games (26 carries for 97 yards and a touchdown), but he played behind fellow undrafted rookie Alonzo Harris throughout. Harris held the third-string running back job until he missed curfew the night before the Detroit game on Dec. 3 and Crockett was activated from the practice squad three hours before the game. He played seven snaps against the Lions and provided a spark in the second half with his five carries for 22 yards. He was used sparingly the rest of the season. A prodigious runner at the FCS-level, Crockett showed some explosiveness in limited opportunities.

The Packers’ old reliable. Like any battle-hardened running back, Kuhn’s value always seems to go up when the temperatures dip. It shouldn’t come as much of a surprise that the 33-year-old fullback played more offensive snaps in the last four regular-season games (164) after McCarthy resumed play-calling than he did in the first 12 combined (140). A tried-and-true pass protector, Kuhn’s biggest offensive role came as the lone back in the four-receiver packages where Randall Cobb lines up in the backfield. His lead blocking is adequate and proved to be an upgrade later in the season when tight ends weren’t getting the job done. Kuhn’s 15 touches were his fewest since 2009, but he came through to produce first downs in several situations. A trusted companion of Rodgers', Kuhn also took rookie sixth-round pick Aaron Ripkowski under his wing. He was selected to his fourth Pro Bowl as a first alternate following Marcel Reece’s suspension. The Packers took a liking to Ripkowski early in the draft process, bringing the former Oklahoma standout into Green Bay for a pre-draft visit. They were impressed enough by what they saw that they used one of their three sixth-round picks on the 6-foot-1, 246-pound fullback, making him the first player they had drafted at the position in six years. His offensive opportunities were limited, but Ripkowski showed a willingness to seek contact. His biggest play came on his only offensive touch of the season: an 18-yard catch out of a full-house formation against Carolina in which he lowered his shoulder into Carolina cornerback Bene Benwikere. Ripkowski played the third-most snaps on special teams (272) and wasn’t flagged for a penalty. He tied for the fourth-most coverage tackles (nine), according to the coaches’ statistics. The fullback position isn’t going away in Green Bay, but the Packers must decide whether they feel comfortable enough with Ripkowski to part ways with Kuhn, who’ll turn 34 in September.