The view from Tim Kuehn's proposed building would have Lambeau Field to the southeast and the Titletown District to the southwest. 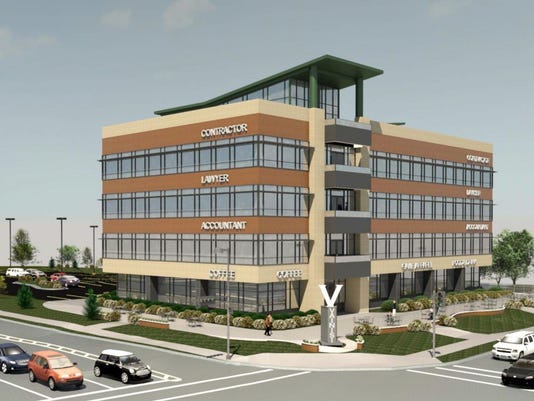 An artist's rendition of the kind of building developer Tim Kuehn would like to build on the northeast corner of South Ridge Road and Lombardi Avenue.(Photo: Courtesy of Tim Kuehn)

The view from Tim Kuehn's proposed building would have Lambeau Field to the southeast and the Titletown District to the southwest.

"I just think it's the best 3-acre corner that the city of Green Bay has to offer, and as good a 3 acres as any in the area," Kuehn said. "The sight lines to Lambeau Field are fantastic. It's a perfect link to the Titletown District" from the neighborhood.

It is the houses that prompted a public open house scheduled for 6 p.m. Thursday at SpringHill Suites by Marriott, 1011 Tony Canadeo Run, for neighbors to learn about the plan. To use that land for his project, the city will have to amend its comprehensive plan and rezone the property with the houses. Each process could take six to eight weeks, though it could be done concurrently, said Paul Neumeyer, senior planner/zoning administrator for Green Bay. Whether to do so has not be decided, he said.

Kuehn owns four lots totaling 2.13 acres fronting South Ridge Road, Lombardi Avenue and Frank Street, and has options on others. The land he owns is valued at $1.35 million. Property taxes for 2015 were $27,452.

The 40,000-square-foot building would include three floors of professional office space and first-floor retail, including possibly a coffee shop or sandwich shop, Kuehn said. The building will be close to Lombardi Avenue. The land with the houses would be used for parking.

"We'll have nice landscaping that will tie into the neighborhood and provide connectivity to the Titletown District," Kuehn said.

The Titletown District is the Green Bay Packers' proposed 34-acre commercial/residential/recreational development immediately west of Lambeau Field. Construction is expected to begin in mid to late March and will include hotel Lodge Kohler, Hinterland Brewery and a Bellin Health sports medicine clinic.

For his part, Kuehn hopes to begin by June 1. Construction will take nine months to a year.

The city hasn't received a formal submission, but is generally supportive of the idea.

Why: Developer Tim Kuehn wants to build on the northeast corner of South Ridge Road and Lombardi Avenue. His plan calls for amending the city's comprehensive plan and rezoning some of the property.