Packers could seek dual-threat running back

For many reasons, rumors suggesting the Green Bay Packers would pursue former Chicago Bears running back Matt Forte this offseason never made sense.

Packers could seek dual-threat running back

Ryan and Wes discuss the running back position in the third video of our NFL draft series. (April 19, 2016) USA TODAY NETWORK-Wisconsin

For many reasons, rumors suggesting the Green Bay Packers would pursue former Chicago Bears running back Matt Forte this offseason never made sense.

Forte, at age 31, has more wear and tear on his body than most. His dual-threat ability meant Forte has more touches than any running back in the league since 2008. It was hard to forecast Packers general manager Ted Thompson spending the necessary cash to sign him.

But there was a reason Forte-to-the-Packers became a hot offseason rumor before he signed with the New York Jets. It emphasized a significant need in the Packers' backfield.

The Packers don’t just need insurance at running back with starter Eddie Lacy entering the final year of his rookie contract after a disappointing 2015 season. What they could specifically use is a tailback with dual-threat ability, a complement with Lacy and a receiving target for quarterback Aaron Rodgers.

After Ohio State’s Ezekiel Elliot — a potential top-10 pick and consensus top running back in his class — there isn’t a better dual-threat tailback in the draft than Louisiana Tech’s Kenneth Dixon. Dixon caught 33 passes for 464 yards and seven touchdowns as a senior last season, production some running backs don’t duplicate rushing the football. He isn’t an explosive runner, but his downhill style made him hard to tackle. Dixon had 198 carries for 1,073 yards and 19 rushing touchdowns in 2015.

Dixon showed his versatility at the Senior Bowl in January. Senior Bowl president Phil Savage, a former Cleveland Browns general manager and Baltimore Ravens scout, was impressed with Dixon’s dual-threat ability. Savage said he doesn’t see Dixon as a workhorse running back in the NFL, but he could help complete an offensive backfield.

“He is capable as a receiver,” said Senior Bowl president Phil Savage, a former general manager with the Cleveland Browns and longtime Baltimore Ravens scout. “So he does bring you those combo skills to fit. I think he can fit in virtually any backfield in the league. If you have a first- or second-down runner, he could perhaps be the third-down back. If you have a third-down kind of guy, I think he could be a primary ball carrier.”

Notre Dame junior tailback C.J. Prosise also could be a good fit with the Packers. Prosise started his career as a lightly used receiver. He transitioned to running back last year before his senior season, finishing with 157 carries, 1,029 yards and 11 touchdowns. He caught 26 passes for 308 yards and one touchdown. 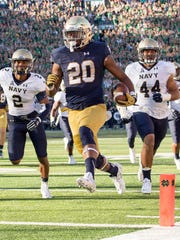 Prosise wraps a receiver’s speed (4.48-second 40) in a running back’s body (6-foot 1/2, 220 pounds). He sees himself comparable to the running back who got plenty of attention among Packers fans this offseason.

“I’m a three-down guy,” Prosise said at the NFL scouting combine, “and a guy you can break the formation with. Kind of like a Matt Forte-type running back that can make big plays in the running game and passing game.”

The Packers would have to aggressively target the running back position if they want to draft Dixon or Prosise. Both are expected to be drafted before the end of the third round, if not the second. It’s hard to predict where Thompson may draft a running back. It’s a clear need but doesn’t have the same priority as other positions.

After re-signing James Starks to a two-year, $6 million deal, the Packers should have at least one season to allow a running back to develop. That time could be beneficial for John Crockett, an undrafted free agent who showed potential in his rookie season. Starks also provides the luxury of patience, allowing the Packers to perhaps wait until later in the draft before targeting a running back.

With three picks late in the fourth round, the Packers might find good value if Alabama running back Kenyan Drake slips down draft boards. Drake has a chance to be drafted in the third round, or maybe even the late second, but it’s conceivable he slides into the draft’s third day.

Injuries severely limited Drake’s college career. A dislocated ankle at Ole Miss ended his junior season after five games. Drake missed two games with a broken arm late in his senior season. When healthy, he was a dynamic athlete making plays as a runner and receiver.

He also offers skills as a returner. Drake had a defining play in Alabama’s national championship game win against Clemson, returning a fourth-quarter kickoff 95 yards for a touchdown.

Drake showed his speed at the combine, running a 4.45-second dash. He also has adequate size at 6-foot 5/8, 210 pounds. He wasn’t used as the workhorse at Alabama, overshadowed by Heisman Trophy winner Derrick Henry.

Savage, a radio color commentator for Alabama football games, said Drake’s injury issues were more “circumstantial” than a red flag for his ability to stay healthy in the future.

“Kenyan is a very intriguing talent,” Savage said. “People down here look at him like a scat back compared to Derrick Henry, but what people don’t realize is (can be) 215, 220 pounds. He actually is a capable runner between the tackles. He just hasn’t really been given a ton of opportunities to do that.

“I really like Kenyan’s talent, the fact that he can play on special teams and has played on special teams as both a cover man and a returner. I think it really helps his cause. I could see him, like Dixon, to me he can fit, he can go wherever your blank is in the backfield.”