The Cleveland Browns picked Wisconsin linebacker Joe Schobert with the first pick of the fourth round of the NFL draft on Saturday. 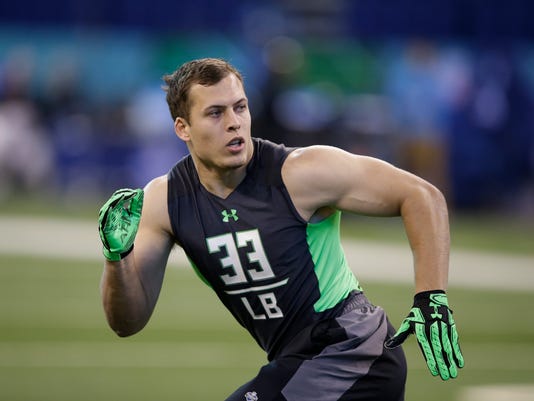 The Cleveland Browns picked Wisconsin linebacker Joe Schobert with the first pick of the fourth round of the NFL draft on Saturday.

The 6-foot-1, 244-pound Schobert, who was a walk-on at Wisconsin after previously being a walk-on commit for North Dakota, had 76 total tackles, 9½ sacks and an interception as a senior last season. He was the Big Ten Conference linebacker of the year.

Schobert is a former standout at Waukesha West High School. He rushed for 296 yards and two touchdowns in the WIAA Division 1 state title game in 2010, a 45-26 win over Stevens Point at Camp Randall Stadium.

Another Big Ten star went off the board with the second selection of the day when the Oakland Raiders traded up and grabbed Michigan State quarterback Connor Cook.

Watt will reunite with former Badgers running back Melvin Gordon, who was selected by the Chargers in the first round last season.