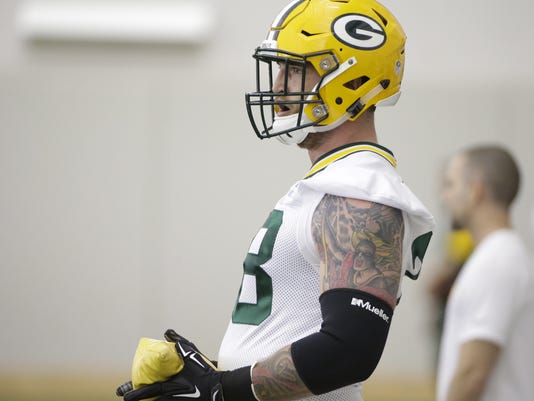 There is nothing fun about waiting nearly six rounds before being drafted. At least until the phone rings.

For Stanford tackle Kyle Murphy, the wait was excruciating. Murphy had to watch 199 players drafted before the Green Bay Packers finally called him late in the sixth round.

Once he got the call, Murphy said, the opportunity was well worth the wait.

“It’s pretty well documented how tough it is on draft day,” Murphy said. “You’re kind of waiting, waiting — especially being a sixth-round pick. You always hope to be picked a little earlier. So that’s obviously tough when you hope to be chosen sooner, but when I got the call from Green Bay, I was like, ‘Dang, that’s pretty crazy.’ Just because of the tradition — the winning tradition — and how bright the future is.

“There’s a lot of other places — I’m not going to drop names — but there’s a lot of places you could go to that have worser fan bases, worser teams, worser cities. In every category, this place I feel is at the top of the list. So I couldn’t be more thrilled.”

Back to school for some Packers rookies

Murphy’s perspective was similar to other members of his draft class at the Packers weekend rookie orientation. Asked about their current situation, each listed a chance to win immediately among the things that most excites them.

That isn’t surprising, of course. No rookie comes into an organization expecting to lose. But, not to drop names, the chance to win is higher for some teams than others. In Green Bay, rookies know they’re entering a franchise annually considered among the league’s top title contenders.

That reality wasn’t lost on first-round defensive tackle Kenny Clark. The money that comes with being the 27th overall pick is nice. But, yes, winning is an added bonus.

The chance to win will be a welcomed change for Indiana tackle Jason Spriggs.

The Hoosiers were 1-11 in 2011, one season before Spriggs arrived on campus. The Elkhart, Ind., native grew up in the shadow of Notre Dame, but the Fighting Irish didn’t recruit him. He was recruited throughout the Big Ten — including Michigan and Michigan State — but chose Indiana for the chance to build a program from scratch.

The four-year starter accomplished much of what he hoped to do. The Hoosiers improved during his career as starting left tackle, from 4-8 in 2012 to 6-7 in 2015. As a senior, Spriggs helped lead Indiana to its first bowl game in eight years. The Hoosiers lost a 44-41 overtime heartbreaker to Duke in the Pinstripe Bowl the day after Christmas.

Still, Spriggs has to go way, way back to name the best team he’s played for to this point.

He knows that’ll change now. Starting this season, Spriggs isn’t trying to build a program from scratch. He’s playing for one of the NFL’s premier franchises, one of its elite title contenders. He’s ready for something new.

“It’s huge,” Spriggs said. “Just to be able to come to a program like this is amazing. I can’t be thankful enough to be able to be a part of this program.”