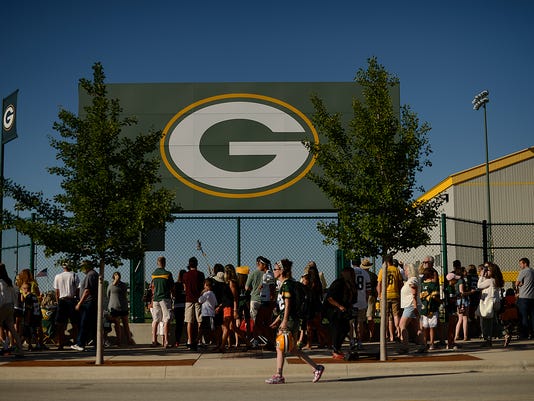 The Green Bay Packers training camp will be at St. Norbert College in De Pere for the 59th consecutive summer, the longest stay at one location for any NFL team. Forrest Gregg, the coach from 1984-'87, at the time attempted to convince management of the benefits of training at a more remote locale. One thing he didn't like was the sound of traffic alongside the practice field. The Packers investigated such sites as Whitewater, River Falls, La Crosse, Madison and Marquette, Mich., but were dissuaded by vigorous protest from fans, club hierarchy and tourism officials. Previously, the Packers trained at Rockwood Lodge just north of Green Bay from 1946-'49, on fields around old City Stadium in '50, in Grand Rapids, Minn., from 1951-'53 and in Stevens Point from 1954-'57.

Players again will be housed on the St. Norbert campus at Victor McCormick Hall, which is outfitted with 100 custom beds. Players generally will eat breakfast, lunch and dinner in the team dining room at Lambeau Field, but select meals and snacks also will be served at St. Norbert. They will check out of the dormitory Aug. 13. Marginal players then will take lodging in a nearby hotel for several weeks until their fate is determined. The St. Norbert campus is about 6 miles south of Lambeau Field and the team's administrative-training complex. All practices are conducted at the team facility just as they are during the regular season.

The Packers have made major changes in their practice schedule under coach Mike McCarthy. Gone are the days when they'd practice once in the morning and once in the afternoon. In 2006, McCarthy eliminated about 25% of the practices by rotating days with two workouts followed by days with one workout. McCarthy hoped to keep the players more energized and to spend more time watching video with players after each daylight practice. From 2007-11, he scheduled no practice on the first three Wednesdays of camp. In 2012, McCarthy went back to morning practices in the first two weeks of camp, night practices in weeks 3-4 and morning practices in weeks 5-6. In 2013, McCarthy practiced in the early morning for the first 2½ weeks and in the late morning for the final three weeks. In 2014, McCarthy conducted 12 practices in pads, five in shells and four in shorts, and 17 of the 21 were open to fans. Last year, there were 13 practices in pads and four in shells, and four walk-throughs on the day before exhibition games that were closed to the public.

McCarthy's tentative schedule this summer will include the possibility of 16 practices and five walk-throughs over the 37 days of camp. For the third straight year, the schedule released by McCarthy in June didn't indicate if pads would be worn. During the first week of camp the practices will start at 8:15 a.m. During the second week, night practices return after being off the schedule a year ago. There will be four in all, starting at 6:15 p.m.

For the first time in years, the Packers scheduled a practice in 2013 that was closed to fans. In 2014, McCarthy increased the number of closed practices to four, including two on the first practice following an exhibition game. In 2015, the only practices designated as closed to fans were the light workouts on days before exhibition games. This year, it would appear the Packers will practice Saturday, Aug. 20, but fans won't be able to attend.

In good weather, the Packers will practice on Ray Nitschke Field, which was dedicated in 2009.

A mini-stadium with a brick façade, Nitschke Field contains two north-south fields: one is a regulation 100 yards and the other, which measures 70 yards, has an underground heating system identical to Lambeau Field. The Packers use the heated field late in the year to practice outside.

Five rows of permanent metal bleachers raised 6 feet off the field can accommodate about 1,500 fans. There also are standing-room areas at the north and south ends. The seats have been virtually filled at the start of many practices each of the last six summers, but after the first hour or so the crowd dissipated, leaving plenty of opportunities for fans to sit. Gates will open 90 minutes before the start of practice and close 30 minutes after it ends. Most players will arrive and exit through a gate at the northwest corner. Eight permanent light standards provide lighting equivalent to what Lambeau Field had before its renovation.

The surface is DD GrassMaster, the same grass-and-synthetic field that was installed on Clark Hinkle Field in 2005 and on Lambeau Field in 2007. Hinkle Field will be used most of the time during the regular season until late in the year.

As always, admission to practice is free. Spectators are allowed to bring in small bags and coolers (no alcohol). Small stadium seats are permitted. Alcohol and smoking are prohibited, as are video recording devices and still cameras with lenses longer than 12 inches.

This will be the eighth summer since 1958 that Hinkle Field, formerly known as the South Oneida Street Practice Field, won't be the primary practice field during training camp. There had been bleachers seating about 1,100 at Hinkle.

Tuesday, Aug. 30, is the last day for fans to attend practice. Canvas then will be drawn around the fields so the Packers can practice in privacy to prepare for the regular season. The NFL allows scouts from other teams to attend training-camp practices if admission is charged. Free practices are off-limits to opposing scouts.

Parking for practice is available in the Lambeau Field lot, where tailgating is welcomed.

Food and beverages will be available for purchase near the practice field. Food also will be available in the Lambeau Field atrium at half a dozen restaurants starting with lunch. Having closed the former Curly's Pub, the Packers opened the new 1919 Kitchen & Tap last summer. It's located on the first floor of the atrium below the former location of Curly's. The new restaurant-bar opens at 11 a.m. and closes at 10 p.m. The atrium is open from 8 a.m. to 7 p.m. Monday through Friday, 9-6 on Saturday and 10-5 on Sunday.

Perhaps the best places are the team's websites, packers.com and lambeaufield.com. The latest alterations in the practice schedule will be available there. Fans also can obtain daily reports on times and attractions by calling (920) 569-7502. There also is a fan assistance kiosk located near the practice field, and employees/ushers in red vests are in abundance around Nitschke Field.

The team's guest relations desk in the atrium generally will be staffed Monday to Friday from 8 a.m. to 5 p.m. and from 9-5 on Saturday and Sunday.

In 2014, coach Mike McCarthy eliminated the scrimmage at Lambeau Field and turned it into a practice in pads. Attendance was 67,366 and 67,191 last year.

The padded practice will be held Sunday, July 31, with warmups beginning at 6:30 p.m. Practice starts at 7:30. A jersey giveaway and fireworks/laser show will conclude the evening. No refunds will be given unless all stadium activities from 5:30 through the fireworks are canceled.

In 2007, the Packers held a night practice at Old City Stadium adjacent to Green Bay East High School. Otherwise, every practice has been on their fields.

Citing safety risks, the Packers realigned their old parking lot in 1997 to reduce the number of fans who could wait outside the building for players and coaches after practice. In recent years, players and coaches used a reserved lot on the northeast side of Lambeau Field that was off limits to fans. At times, players would sign for fans that lingered outside the fence. Now players park in a new surface area just south of the previous existing lot on the east side of the stadium. Fans might be able to hail players and receive autographs outside the parking-lot fence.

It has been a tradition for players either to walk or ride on kids' bicycles to and from practice, and coach Mike McCarthy encourages the practice. However, in the last decade or so, many starters and key players have been hopping into vans driven by St. Norbert personnel after each practice for rides from the field to the facility, making them inaccessible to fans. Youngsters with bikes are encouraged to line up in a new bike corral on the east side of the stadium at least 20 minutes before practice and on the street just north of Nitschke Field after practice. Many players then pick a bike to ride, with the youngster hitching a ride on the back of the bike or running alongside. The biking tandems have about 100 yards more to cover with the move to Nitschke Field. Beginning Tuesday, children from the Boys & Girls Club of Greater Green Bay will ride with players on five custom three-wheeler bikes in a promotion known as DreamDrive.

The Packers instituted a program in 1997 to help some fans obtain autographs by having players and coaches sign at nearby tables after the morning practice. The Packers did away with autograph tables in 2006 and erected something called the Tundra Tailgate Zone in 2008. A free attraction, the enclosed area on the east side of the stadium is contained in a large tent. Kids have a chance to meet players, shake their hands and potentially get autographs.

In recent years, the Packers initiated the Future Lambeau Leapers Autographs program designed for kids ages 12 and younger. This year, the chance for kids to mingle with players will be held in the Hutson Center for about 20-30 minutes. Although subject to change, players are scheduled to appear in the Hutson Center July 26-28 and 30-31. Other opportunities for autograph-seekers present themselves as players head to and from practice.

The Packers Experience, a free interactive training camp playground, operated from 2005-'13. It has been replaced by an interactive DreamZone located in the Tundra Tailgate Zone in the east parking lot. Note that the DreamZone will be open for only the first week of training camp, or July 26-Aug. 1. The DreamZone also will feature ChalkTalk, an area where McCarthy, players and alumni will speak about pursuing one's dreams. The schedule of speakers is available online.

The Packers have arranged activities for fans just east of Nitschke Field over the first week to 10 days of camp. Check online for the various offerings.

The Packers Hall of Fame reopened last summer. It includes 15,000 square feet and spans two levels in the atrium.

Guided stadium tours have been divided into three distinct categories this year.

A limited number of tickets are sold online. Tickets in the atrium are sold on a first-come, first-served basis for each day's tours. They often sell out. During training camp, tickets are sold starting at 9 a.m. Monday-Saturday and at 10 a.m. on Sunday.

Groups of 20 or more should call stadium tours (920) 569-7512 for reduced rates. Specific tour times for the first few weeks of training camp are available online. However, they are subject to change on a daily basis.