There were times last fall when Richard Rodgers’ body took “a toll” even as he casually walked. His feet hurt. Back ached. The rigors of an NFL season beat him up. 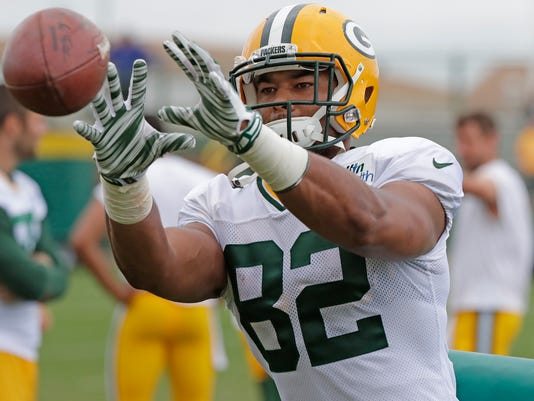 GREEN BAY - There were times last fall when Richard Rodgers’ body took “a toll” even as he casually walked. His feet hurt. Back ached. The rigors of an NFL season beat him up.

Rodgers carried as much as 275 pounds, he said. Same weight as some defensive ends. He wasn’t on the injury report. Didn’t miss a game. But Rodgers’ body took a pounding.

“The NFL season is a really long season,” he said.

Even longer for a tight end tipping the scale over 270 pounds. Rob Gronkowski, a behemoth of a man at 6-foot-6, is listed at 265 on the New England Patriots roster. The Panthers' Greg Olsen is 255. The Cowboys' Jason Witten, 263.

Despite being shorter, Rodgers was heavier than all three.

Rodgers didn’t report to camp overweight a year ago, he said. When he moved to tight end before his junior season at California, Rodgers added 25 pounds. His weight fluctuated between 272 and 275 ever since.

As the Packers' top receiving tight end last fall, Rodgers struggled in the open field after receptions. It wasn’t his only problem. If 275 pounds is hard to accelerate, Rodgers said it’s even harder to slow down.

Running routes, Rodgers had to stop on a dime. He felt sluggish changing directions downfield. Sometimes, he cut fast. Other times, he braked slow.

So, he said, coach Mike McCarthy asked him to slim down this offseason. McCarthy had a specific target in mind, wanting his tight end to weigh 258 pounds. When Rodgers took his physical before training camp, he said, the scale read 258.

“I think Richard looks great,” quarterback Aaron Rodgers said. “He’s had a great offseason, and we’re primed for him to continue to build on the things he’s done in the first couple years.”

McCarthy said he noticed a philosophical shift this offseason. An increased “understanding” of how to prepare off the field. The Packers tight end picked a good time to make that transition.

This preseason, he might have to fight for his role in the offense.

There is a need for speed from the position. Despite catching 58 passes last fall, Rodgers gained 510 yards. He ranked 12th among NFL tight ends in receptions, 18th in yardage, and 38th with 8.8 yards per catch (minimum 20 receptions).

General manager Ted Thompson actively sought to fill that hole, signing free agent Jared Cook last spring. At the same time Cook arrived in Green Bay, Rodgers was doing his part. He said Cook’s signing wasn’t a message directed at him from the front office, but he responded anyway.

Rodgers consulted with team nutritionist Adam Korzun this offseason and overhauled his diet. Through training camp’s opening week, he might be the most physically transformed player on the Packers roster.

“It was hard the first seven, eight days,” Rodgers said of his new diet. “I was trying to cut out my carbs. Then after that, it’s just really regulating my eating. Not eating bad things. Not eating bread and candy.”

Red Vines were the first to go, he said. Rodgers always had an unhealthy affection for cherry licorice. He substituted the junk food for salad. Chicken. Fish. Eggs.

Related: Brett Favre to be host on SiriusXM

Rodgers hopes being lighter will make him faster. More importantly, he wants to change direction at a consistent speed. No longer sluggish, Rodgers hopes he’s an easier target for his quarterback.

“It’s just really getting in and out of breaks faster,” Rodgers said. “It’s hard to stop all that momentum and all that weight sometimes. So depending on the surface or whatever, it varies game to game. Being lighter just makes it more even, coming out of my breaks at the same speed.”

Rodgers can’t match Cook’s pure speed. In two seasons, he hasn’t stretched the field vertically. To compensate, he needs to perfect the nuances of his position. Most important, backup quarterback Brett Hundley said, is for a tight end to make each route look the same every time.

Consistency will be Rodgers’ key in the Packers tight end battle, but there are other skills he possesses that Cook can’t duplicate. Rodgers is a productive red-zone target, catching eight touchdowns last season alone. In seven seasons, Cook has 16 career touchdowns.

Rodgers knows he’ll compete with Cook this preseason, but he’ll also learn from his veteran teammate. Cook moved to Green Bay from the NFC West, a division with no shortage of defense. Rodgers expects Cook’s experiences playing against the Seattle Seahawks, Arizona Cardinals and San Francisco 49ers twice each year should offer good trade tips.

“That’s not a message to me at all,” Rodgers said of Cook’s signing. “We’re trying to win a Super Bowl. This is a business, and whatever they have to do to get that accomplished, that’s what they’re going to do. We all know it’s a business, and it’s a competition. So I’m not going to sit here and be like, ‘Oh, they brought in another tight end. That’s a message to me.’