Quarterback said he didn't know there would be a Vikings jersey in his Hall of Fame display until told by a media member. 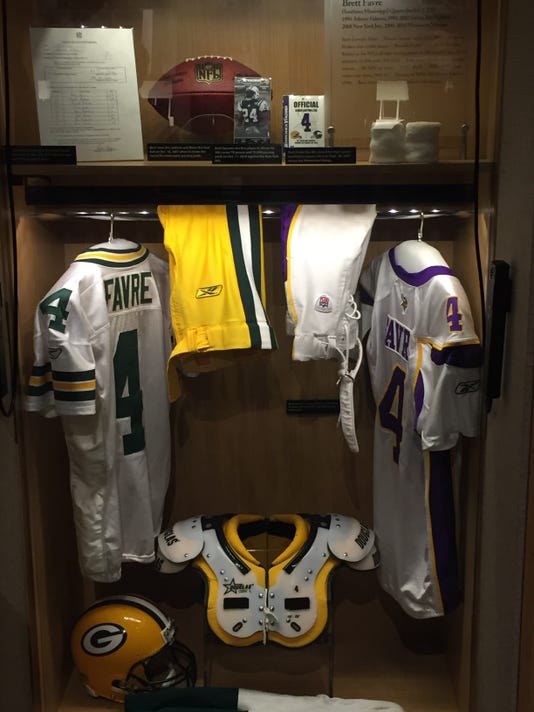 CANTON, Ohio - Brett Favre thinks his Hall of Fame display is “pretty cool,” but until he saw it for the first time Friday morning he was not aware that a Minnesota Vikings No. 4 jersey was hanging in it next to his Packers No. 4.

Favre didn’t have any reaction to the dual acknowledgment, but he knows Packers fans will.

“Green Bay fans probably don’t like the Vikings jersey,” he said as he walked through the Pro Football Hall of Fame on his way to a luncheon with fellow Hall of Famers.

Yeah, that’s pretty evident if a few minutes spent in front of the display are any indication.

“Who came up with that display?” said another fan. “He must have been a Communist."

Favre insisted that he had nothing to do with the dual-jersey display and didn’t know anything about it until contacted by a media member.

“Who was that that asked me?” Favre asked. “(ESPN’s) Ed Werder. He said, ‘How do you like your display?’ and I said, ‘I don’t even know what the hell you’re talking about. So I finally saw it this morning.’”

Pete Fierle, vice president of communications for the Hall of Fame, told ESPN that the Hall decides what will be in each display. He said the players don’t have a say in what will be placed in them.

"That is an exhibit for the Class of 2016," Fierle said. "There are eight lockers created, one for each enshrinee. They contain artifacts of each Hall of Famer."

Favre played 16 seasons with the Packers and just two with the Vikings. All three of his MVP awards came during his time with the Packers, and he led them to two Super Bowl appearances.

Favre had one of his finest seasons playing for the Vikings in 2009, earning a selection to his 11th Pro Bowl and leading Minnesota to the NFC championship game. His ironman streak of 299 consecutive games ended in 2010 with the Vikings.

Regardless of where his career ended, Favre said he knows how he'll be remembered, even if his old quarterbacks coach, Steve Mariucci, had to rib him a little.

"With Mooch this morning, we kind of did a little walk-through and talked about it, and he kind of poked fun at Green Bay and Minnesota being in the same locker together," Favre said later at his official news conference. "But there’s no doubt how I will be remembered, and that’s as a Packer, as it should be.

"I wouldn’t trade my 16 years in Green Bay for anything."

Favre said that the Vikings experience helped him appreciate something about playing for the Packers that he said he might have overlooked occasionally. It happened when he returned to Lambeau Field as Viking in 2008 and was booed resoundingly.

"I had a tremendous amount of respect for playing as a home team quarterback in Lambeau for so many years, but I really, I don’t know if I underappreciated how difficult it is to play on that field, with the fans cheering against you, until I walked out of the tunnel as an opponent," he said. "It was an incredible feeling of awe, and I’m really thankful that I played in Minnesota. We didn’t win a championship, but I’m thankful that I had a chance to witness it from the other side, if that makes sense.

"Because I think I would have taken for granted how special it is to play there, and when I came out as an opponent, I realized this place is pretty special."