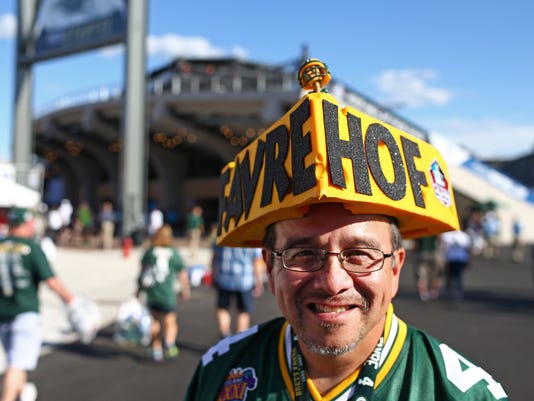 CANTON, Ohio - The line snaked past other Hall of Fame displays Saturday afternoon. Around the corner, up a ramp, 50 feet of humanity waited their turn.

You could see Kevin Greene's locker with no delay. You could walk right up to Marvin Harrison's display. Ken Stabler? No problem.

The line was mostly Green Bay Packers fans, of course. Most wore green jerseys with gold trim, donning No. 4. At the end, when they arrived at a curious collection of history, each Packers fan posed for pictures the same way.

"Block out that Vikings jersey!" a woman said from behind her camera phone.

"That's what I'm trying to do!" a man answered.

Packers fans flooded this tiny town in northeast Ohio to see their beloved quarterback enshrined Saturday night. No, they didn’t want any part of that purple-and-gold No. 4, the one Favre wore when he set the NFL’s most consecutive starts streak. And why would they?

Vikings colors are as much a painful reminder of how Favre's record-breaking career ended as they are part of his historic journey. Yet it was fans of other teams in Brett Favre’s line — yes, even the Vikings — that illustrated what this Saturday in Canton meant.

They all made their pilgrimage to Canton for different reasons. On Saturday, they wanted to see one player. Favre’s career always will belong to the Packers. In the Pro Football Hall of Fame, his legacy now belongs to football fans everywhere.

“To see everybody else here,” Canton resident and Packers fan Tim Parsons said, “and the respect all the other teams give us, it’s just amazing. I love it.”

For about 15 years, Parsons said, he has attended his hometown’s enshrinement ceremony annually. The crowd for Saturday’s enshrinement — at least 80 percent Packers fans — was something he hadn’t seen in a long time. Especially for a distant fan base.

Parsons, 43, compared it to the crush of Dallas Cowboys fans that flocked to Canton a decade ago when quarterback Troy Aikman was inducted in 2006.

He was easy to spot in the sea of green. Parsons, an Ultimate Warrior fan, wore a green-and-gold replica mask and foam Cheesehead. Packers pendants were attached to his Brett Favre jersey. It’s the same outfit Parsons wears each year to the enshrinement.

There was much more significance Saturday.

“People will say, ‘How did you get into dressing up?’” Parsons said. “I’m an ultimate fan. I just love it. I love the Packers. I loved watching Favre play. He was amazing.

“Some of the passes he could make — double coverage, triple coverage, one foot — it amazed me. I never played football. Just to see him was an inspiration.” 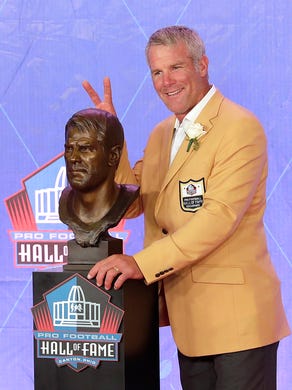 Brett Favre playfully jokes with his bust after his speech at the Pro Football Hall of Fame induction ceremony in Canton, Ohio on August 6, 2016. Jim Matthews/USA TODAY NETWORK-Wis
Fullscreen

Brett Favre and his wife Deanna playfully talk behind his bust after his speech at the Pro Football Hall of Fame induction ceremony in Canton, Ohio on August 6, 2016. Jim Matthews/USA TODAY NETWORK-Wis
Fullscreen 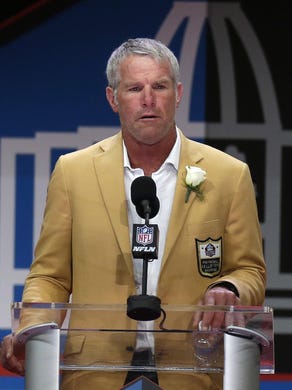 Former Green Bay Packers quarterback Brett asked players he has had as teammates to stand as he talks about his teammates, father, coaches and fans that have influenced his life during NFL Pro Football Hall of Fame Enshrinement Ceremony in Tom Benson Stadium in Canton, Ohio, Saturday, August 6, 2016. Rick Wood/Milwaukee Journal Sentinel
Fullscreen 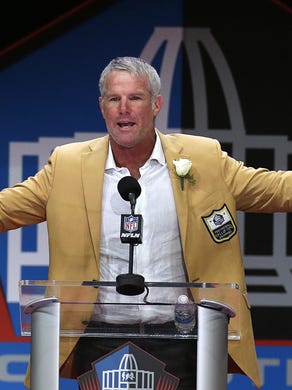 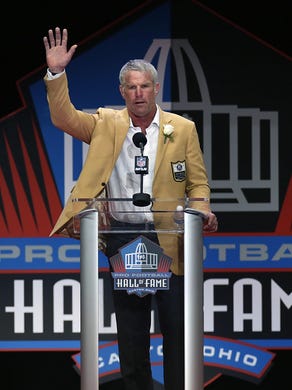 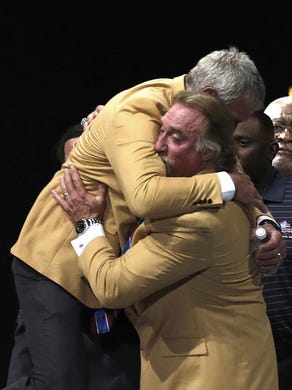 Former Green Bay Packers quarterback jumps down off the stage into the arms of Kevin Greene after Brett talks about his teammates, father, coaches and fans that have influenced his life during NFL Pro Football Hall of Fame Enshrinement Ceremony in Tom Benson Stadium in Canton, Ohio, Saturday, August 6, 2016. Rick Wood/Milwaukee Journal Sentinel
Fullscreen

Former Green Bay Packers quarterback Brett hugs Kevin Greene as coach Don Capers watches at left. The hug was after the conclusion of his speech where he talked about his teammates, father, coaches and fans that have influenced his life during NFL Pro Football Hall of Fame Enshrinement Ceremony in Tom Benson Stadium in Canton, Ohio, Saturday, August 6, 2016. Rick Wood/Milwaukee Journal Sentinel
Fullscreen

Brett Favre gets choked up talking about his father during his induction speech at the Pro Football Hall of Fame induction ceremony in Canton, Ohio on August 6, 2016. Jim Matthews/USA TODAY NETWORK-Wis
Fullscreen 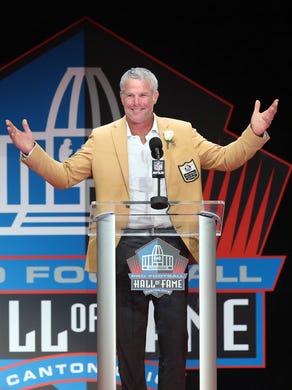 Kevin Greene during his acceptance speech at the Pro Football Hall of Fame induction ceremony in Canton, Ohio on August 6, 2016. The bust of Orlando Pace is at left. Jim Matthews/USA TODAY NETWORK-Wis
Fullscreen 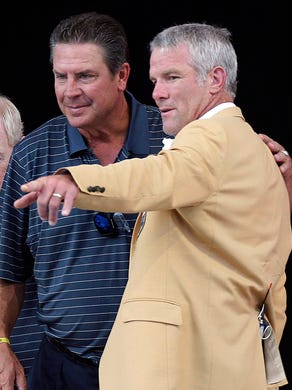 General view of a banner on the stadium depicting the 2016 inductees before the 2016 NFL Hall of Fame enshrinement at Tom Benson Hall of Fame Stadium. Charles LeClaire-USA TODAY Sport
Fullscreen

A general view of the exterior of the Pro Football Hall of Fame prior to the 2016 NFL Hall of Fame enshrinement at Tom Benson Hall of Fame Stadium. Aaron Doster-USA TODAY Sports
Fullscreen

Fans view the busts of players in the Pro Football Hall of Fame prior to the 2016 NFL Hall of Fame enshrinement at Tom Benson Hall of Fame Stadium. Aaron Doster-USA TODAY Sports
Fullscreen 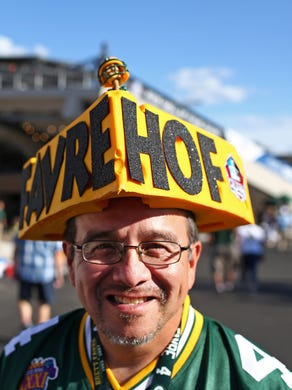 Inspiration is why Brett Favre, more than most players, transcended one team. Why so many Packers fans followed their quarterback to New York before the 2008 season.

Fandom is about relating. In his blue jeans, sleeveless shirt and reckless abandon, Favre was human. He was real.

“If he hadn’t gotten elected,” Tampa Bay resident and Packers fan Tony Fellows said, “if he wasn’t a first-ballot (Hall of Famer), it would’ve been a big rip-off. I would love to know if anybody voted against him, because they’d be idiots.”

Fellows made his first trip to Canton on Saturday because he wanted to see the quarterback he cheered over two decades. As soon as Favre was announced, he said, he told his wife he was taking a vacation to Canton for the first weekend in August.

Robbie Hawkins, a 27-year old Danville, Ohio resident, didn’t have to travel far to make his first trip to Canton. It was barely an hour’s drive from his home to football’s birthplace. Hawkins was one of those fans who followed Favre from the Packers to the Jets, and then to the Vikings. He became a Packers fan in 1996, he said, because of Favre.

He loved the way his quarterback played. Loved how Favre would either make a perfect, impossible pass, or an awful, bone-headed mistake. There often was no in-between.

“He played like it was backyard football,” Hawkins said. “I liked that he was a gunslinger. What made him great also was his downfall. He’d fit it in the hole one time, and then throw a pick at the end of the game that killed you. That’s what made him stand out.

“That’s why, if you look around here, this place is dominated – whether it be Packers, Jets, Atlanta Falcons, Vikings – with Favre attire. That’s why everybody loved him, because he didn’t change the way he played the game to make it. He played it the way he wanted to, and he was still successful. What made him special was he didn’t have to have all the perfect techniques to still be great. He just found a way to win.”