Hall of Fame Game canceled due to field

Hall of Fame Game canceled due to field

Michael Cohen and Pete Dougherty discuss the issues with the field that caused officials to cancel the Hall of Fame Game between the Green Bay Packers and Indianapolis Colts in Canton, Ohio.

CANTON, Ohio - By the time the night was over, the midfield logo was practically scrubbed clean from Tom Benson Hall of Fame Stadium, almost as though the National Football League and Pro Football Hall of Fame hoped to erase Sunday night's fiasco from memory.

What was supposed to be the finishing touch on a magnificent weekend for the Hall of Fame turned into a sticky mess that ended in the preseason kickoff game being canceled, marking the third time in its six-game relationship with the Hall of Fame game that the Green Bay Packers left here prematurely.

After hours of consternation over the condition of the playing surface and strong objections to playing from both the Packers and Indianapolis Colts, the playing field was deemed unsafe and the game canceled about 6:15 p.m. Milwaukee time. Scores of Packers fans who came to see Brett Favre inducted into the Hall of Fame Saturday night and their 2016 team play for the first time the next day, had to settle for a refund.

"Player safety issue," coach Mike McCarthy said after a makeshift on-field appearance by both teams concluded about the time the first quarter should have been ending. "We did the right thing in line with player safety. It’s disappointing for the team to come down here and (not) play; very disappointing for our fans.

"(But) it was just incredible to see the green and gold. Everybody was there last night. I thought the ceremony last night was special."

It was obvious three hours before the game started that there was a problem. A motorized sweeper was scraping the red, white and blue Hall of Fame logo at midfield, scattering piles of rubber pellets that sit below the surface of the UBU turf and prevent players' cleats from sticking in the artificial surface.

Later, Hall of Fame executive director David Baker explained that the wrong kind of paint was used on the midfield hall of fame logo and the giant red and white letters in both end zones, causing unsafe conditions. A source familiar with players on both teams said they told him the surface was like "concrete" in some places and largely unplayable.

In other areas, particularly where letters were piped in red, it was almost as though the paint melted on the artificial grass blades and rubber pellets, resulting in a gooey mixture that might have caused players' cleats to stick into the ground. The actual surface, transplanted from the Superdome in New Orleans after the 2016 Sugar Bowl, wasn't the problem.

Baker, booed by the crowd as he took the microphone at midfield to explain the cancellation, said as important as the game is to the Canton area, he had to bow to player safety.

"We heard their concerns," Baker said in an interview on ESPN, which was scheduled to televise the game. "Though it was a difficult decision, a lot of fans came a long way. But it was the only decision that could be made. There will be a refund policy. I don't know what it is yet."

Both teams started to come out on the field a little before 5 p.m. and not long after there were coaches, team officials and medical personnel congregated at midfield. At first, it appeared workers were trying to clear the field of the rubber pellets, which were piling up in a half circle around the logo.

McCarthy, Colts coach Chuck Pagano and numerous team officials from both sides gathered to discuss the situation and watch the grounds crew work on the logo. In the meantime, players started to jog, stretch and walk around the areas of the field that did not appear to be affected.

As the workers continued to scuff the surface of the Hall of Fame logo, the prospect of everything being cleared away in time for the start of the game started looking spotty.

Packers general manager Ted Thompson huddled with team physician Patrick McKenzie for a considerable amount of time just two hours before the start of the game as workers continued to sweep over the paint and then shovel up the piles of rubber pellets and distribute them evenly back on the field.

"Again, player safety is so important now," president Mark Murphy said. "The biggest issue facing the league is concern about health and safety. When you have something like this come up, I think you have to make sure you do your due diligence and really look at it.

"The decision that the league and the Hall of Fame made, we support it, and I think it was the only decision that could be made."

The UBU turf is not the same surface that the Pittsburgh Steelers complained bitterly about after kicker Shaun Suisham tore his ACL without contact in last year's Hall of Fame game. The stadium underwent Phase One of an $80 million renovation this off-season and this turf was installed for the sole purpose of hosting this game.

Phase Two of the renovation starts this week and part of that work consists of tearing off this turf and installing a new permanent surface.

Baker said commissioner Roger Goodell was traveling and so he didn't talk to him, but he said he knew Goodell would agree with the decision. The NFL is not connected with the Pro Football Hall of Fame, but it has supported it through this game and other means and promotes the event as its official opening of the football season.

Based on Thompson's player safety concerns — he won't let the Packers practice with another team during training camp because he's so worried about injuries — it wouldn't be surprising if he told the NFL he was not willing to put his players at risk. Both teams could have told the NFL they refused to play the game because of safety reasons.

Even if the Hall of Fame had pushed for the game to be played it's hard to imagine either team giving in.

"There was a lot of conversation but, at the end of the day, you’ve got to make a decision and the decision was made for player safety," McCarthy said. "It’s not how you got there or why you got there. It was the right decision. I give David Baker a lot of credit for doing the right thing."

Said Baker, "One of the doctors shook my hand after we made the decision and said this is the greatest statement in the history of the league in terms of respect for player's and their safety."

Instead of playing a game, both teams came out in jerseys and shorts at 7 p.m. and lined up across from one another at midfield. Many of the players crossed the field to give hugs to former teammates and acquaintances before Baker addressed the crowd.

The Hall of Fame inductees were on hand and Favre spent time joking around with Aaron Rodgers and McCarthy before the introductions. Favre received a huge ovation as he walked from one side of the field to the other, right between the two lines of players.

At one point, he stopped to give Letroy Guion, a former teammate with the Minnesota Vikings, a big hug.

For both teams, it's not the worst thing to happen.

Both were granted an extra week of training camp, but now they don't have to risk player injuries with an extra exhibition game. They will have had three weeks of practice before they engage in a live game, which probably pleases the two coaches.

The Packers are only scheduled to practice in front of the public twice this week, at 6:15 p.m. Tuesday and 11:45 a.m. Wednesday. They may hold a modified practice on Thursday before playing what will now be their first exhibition game Friday against the Cleveland Browns at Lambeau Field.

"It was important to get into real football," McCarthy said. "You get tired of practicing against ourselves."

For the Packers, their next visit to Canton will probably be too soon. In 2003 and 1980 their games were suspended because of lightning. Now this.

But for the small central Ohio town that is banking on a $500 million plan to renovate the stadium, build a four-star hotel and increase the commercial space around the complex, this was a blow. If everything goes right the project could create more than 13,000 new jobs and over a 25-year period generate $15.3 billion in business in Stark County.

There's no sign the NFL plans to pull out of the game, but it definitely doesn't want to experience this again.

"This is an important game for the people of Canton," Baker said. "They're going to keep loving the game. It's a hard decision because of the impact it has, but it's an easy ethical decision."

Green Bay Packers officials including coach Mike McCarthy and President Mark Murphy as well as Indianapolis Colts GM Ryan Grigson,(right) express their concern to David Baker (blue jacket) President of the NFL Hall of Fame, over the condition of the playing field with rubber pellets massed together on the field, before the NFL preseason game between the Green Bay Packers and Indianapolis Colts, Sunday, August 7, 2016, in Canton, Ohio, Rick Wood/ Milwaukee Journal Sentinel
Fullscreen 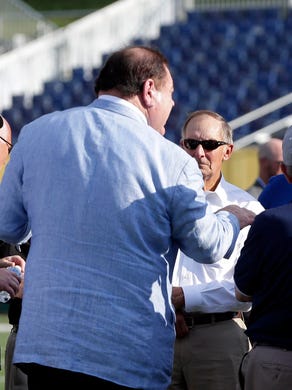 Former Packers cornerback Charles Woodson was out greeting the Packers cornerbacks while waiting word on the playability of the field before the Pro Football Hall of Fame game in Canton, Ohio August 7, 2016. Jim Matthews/USA TODAY NETWORK-Wisconsin/@jmatthe79
Fullscreen

Green Bay Packers officials including coach President Mark Murphy and GM Ted Thompson (back to camera) express their concern to David Baker (blue jacket) President of the NFL Hall of Fame, over the condition of the playing field with rubber pellets massed together on the field, before the NFL preseason game between the Green Bay Packers and Indianapolis Colts, Sunday, August 7, 2016, in Canton, Ohio, Rick Wood/Milwaukee Journal Sentinel
Fullscreen

Workers try to repair the midfield area of Tom Benson Hall of Fame Stadium before the Hall of Fame Game on Sunday in Canton, Ohio Jim Matthews/USA TODAY NETWORK-Wisconsin
Fullscreen