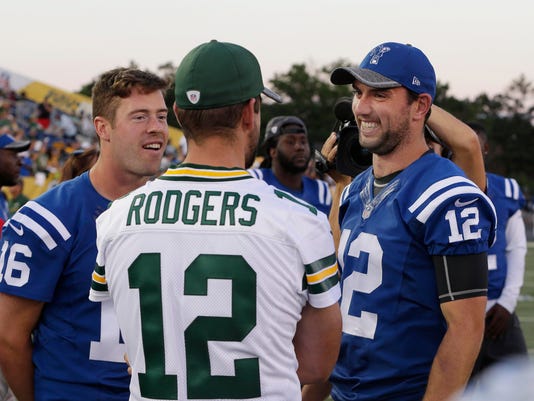 CANTON, Ohio - Green Bay Packers quarterback Aaron Rodgers will return to practice this week after a couple of days rest and he's predicting that teammates Jordy Nelson and Jared Cook will join him fairly soon.

Rodgers, speaking to an ESPN crew that included former teammate Charles Woodson, said the two PUP list occupants would be back "next week." It was unclear if he meant after the Cleveland Browns game Friday at Lambeau Field or sometime this week.

Either way, it's the first anybody has said anything about either player's return.

Rodgers wasn't going to play against the Indianapolis Colts on Sunday night — he hasn't practiced since Wednesday — but he was disappointed the game was canceled because he was eager to see some of his teammates play for the first time this season. He said he was excited to see what undrafted rookie quarterback Joe Callahan would have done as the starter.

He also got to have some laughs with Brett Favre, who was there with some of the other inductees.