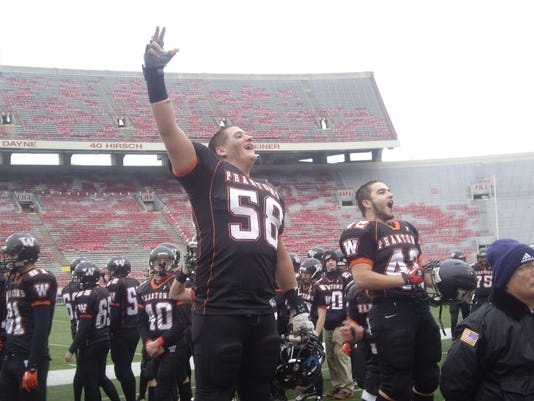 Center Kyle Steuck, left, and running back Ben Berken, both seniors, celebrate in the back of the West De Pere bench area with the team's fans in the nearby bleachers after the Phantoms scored a touchdown in the second half.(Photo: USA TODAY NETWORK-Wisconsin)

GREEN BAY - With two of their centers banged up, the Green Bay Packers have signed former West De Pere High school's Kyle Steuck, who auditioned for the team during rookie orientation camp in May.

Steuck, who played tackle at Northern Michigan, was not drafted and hoped to get into a training camp this summer. The Packers didn't sign him in the spring but they had him on their emergency list and gave him a call late last week.

"So I was actually in a meeting with the West De Pere High School coaches, and we just got done with our scrimmage against Kimberly, and I got a call from my agent," said Steuck, who was helping coach at his alma mater. "He told me when I called him back that they called and wanted to schedule a workout.

"So again it’s just like that, ‘Yes,’ moment when you’ve been working so hard, and finally it’s here."

Coach Mike McCarthy joked that Steuck's addition, along with punter Peter Mortell, a Green Bay native, shows critics that the Packers aren't afraid to sign some locals to their roster

"Personally, I think it’s a little bit funny because we went, I think, the first eight years we didn’t have anybody from Wisconsin, the state of Wisconsin, particularly the university," McCarthy said. "Now it’s like an overflow. I think it’s great.

"I mean gosh, to have an opportunity to play with your hometown team and the uniqueness of growing up in this city with the Packers here, I mean it’s obviously special. It’s an opportunity, hopefully, he takes full advantage of."

The Packers are without starting center Corey Linsley, who is on the physically unable to perform list with a hamstring pull and may not be back this week. In addition, backup JC Tretter battled an illness last week and missed several days of practice, although he played Friday night against Cleveland.

Undrafted free agent Jacob Flores (knee) is on crutches and may not be ready to return anytime soon and Matt Rotheram, who was seeing time at center and guard, suffered a significant biceps injury against Cleveland Friday night.

As a result, the Packers were forced to use veteran Don Barclay at center, a position he has practiced at some during his four years with the Packers but isn't really suited for. Barclay has been mostly a backup at tackle and his play against the Browns exposed some of his inexperience.

Asked if Steuck would be used at center, McCarthy said it was likely.

"That’s the thought," said. "I can’t really — outside of his workout, I want to see him get in there with pads and so forth, see how he does."

Steuck, who announced his signing on Twitter Saturday night, said he was ready for whatever the Packers asked of him. He played mostly at guard on his first day, but will have to show some versatility.

"Wherever they put me," he said.

Schmitt was signed last week to give incumbent long snapper Rick Lovato some competition but broke his hand in the very first live punt snapping drill in which he took part. His hand and arm were in a cast the next day.