Packers vs. Raiders: 5 things to watch

Five things to watch in Thursday night's preseason game between the Packers and Raiders.

Packers vs. Raiders: 5 things to watch

With Aaron Rodgers most likely not playing in the Packers' preseason game against the Raiders on Aug. 18, are five rookies to keep an eye on from the Milwaukee Journal Sentinel's Tom Silverstein. 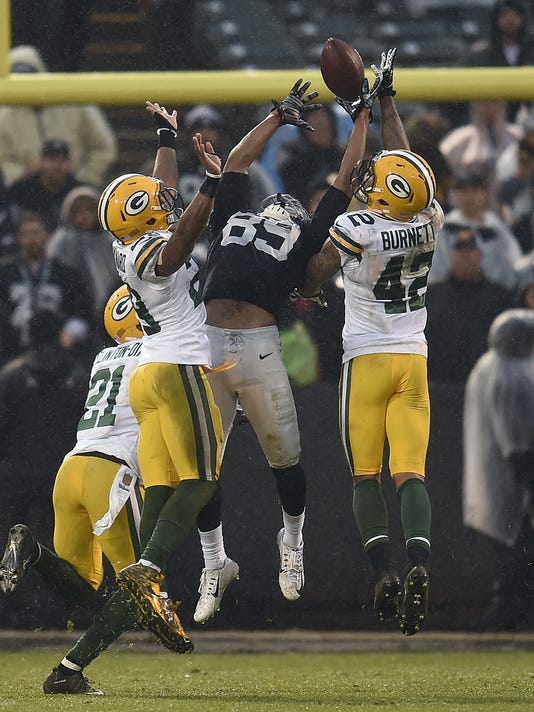 1. Preseason orientation: After missing two weeks with an ankle injury, Hundley is expected to play and possibly start if Aaron Rodgers is rested again. Since he isn’t expected to get many snaps during the regular season, this is his time to shine. He hasn’t played a live down since last preseason and so look for him to play a ton of snaps if his ankle allows him.

2. Tretter time: With Corey Linsley’s absence due to a hamstring injury set to enter its fourth week, JC Tretter has gotten a chance to audition for the starting center job. It once was Tretter’s, but an injury allowed Linsley to claim it and he’s never given it up. Tretter needs to be error-free and show he can pass block as well as Linsley to have a chance.

3. Drawing attention: Wide receiver Davante Adams has had some good moments and some bad ones in camp. For every great play he’s made, it seems he’s had a drop. With Janis out and Nelson just now coming off the PUP list, Adams has to make a statement this week. Assuming Hundley plays, he needs to run some quality routes and be more than just a “fade” guy. The clock is ticking.

4. Chasing Cooper: When they matched up last year in Oakland, Raiders receiver Amari Cooper abused rookie cornerback Damarious Randall for two touchdowns and a pair of long gains. He finished with six catches for 120 yards and the two scores. Randall probably won’t see Cooper the enitre time because he, Quinten Rollins and LaDarius Gunter are rotating positions in various base, nickel and dime packages. But he’ll see him at some point.

5. Speed freaks: Assuming Raiders coach Jack Del Rio plays his defensive starters a quarter or so, the Packers will have to deal with rushing bookends Khalil Mack and Bruce Irvin. After facing a weak Cleveland rush last week, this will seem like a track meet. If coach Mike McCarthy pulls his No. 1 line early, it means rookie Jason Spriggs and either Don Barclay or Josh Walker will be charged with keeping Hundley upright.