For the first time since tearing his ACL in the Packers' second preseason game in Pittsburgh last August, Jordy Nelson was in full pads and uniform.

GREEN BAY - Technically, Jordy Nelson’s pregame warmup before the preseason game Thursday against the Oakland Raiders was not his first official football activity in the past year.

The Green Bay Packers receiver participated in individual position drills during Wednesday’s practice, his first since being cleared from the physically unable to perform list. Closed to the public, nobody outside the Packers staff and players could see the former Pro Bowl receiver’s official return from his torn ACL.

Nelson smiled throughout the warm-up script, which included stretching and position drills. He wasn’t the only one.

“Just to see him in pads,” running back Eddie Lacy said, “it’s been a long time for him, and I’m pretty sure he felt good as well. Just to go out there and get a quick warmup in for his first day back, I’m pretty sure he feels good. The fans liked it. We like it. We can’t wait to have him out there.”

The question is whether Nelson will be out there when the Packers travel to play at the San Francisco 49ers in their third preseason game next Friday.

The Packers need to get their top receiver ready to play Week 1. He hasn’t played a meaningful snap since the 2014 NFC championship game, a 20-month gap. It would be hard — if not impossible — for Nelson to be in peak form Week 1 without preseason snaps.

Of course, it’s understandable if the Packers feel uneasy about Nelson playing in the preseason after what happened last year.

“I don’t know where they’re at with that discussion,” Nelson said. “It’s obviously not up to me. I know it’s in discussion what the plan is the rest of the way, and we’re taking it as we go through.

“We can’t predict the future. So obviously we’ll take this week’s practice and see how everything goes, and we’ll continue to move forward.” 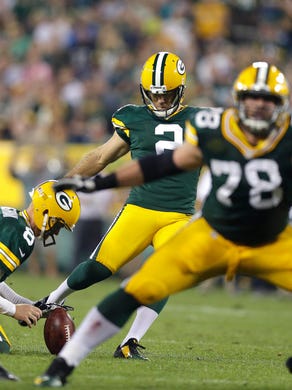 Green Bay Packers punter Tim Masthay (8) has his fourth quarter punt blocked by defensive back Brynden Trawick (41) during the game against the Oakland Raiders at Lambeau Field. The punt was recovered for a touchdown. Jim Matthews/USA TODAY NETWORK-Wis
Fullscreen

Green Bay Packers punter Tim Masthay (8) has his fourth quarter punt blocked by defensive back Brynden Trawick (41) during the game against the Oakland Raiders at Lambeau Field. The punt was recovered for a touchdown. Jim Matthews/USA TODAY NETWORK-Wis
Fullscreen 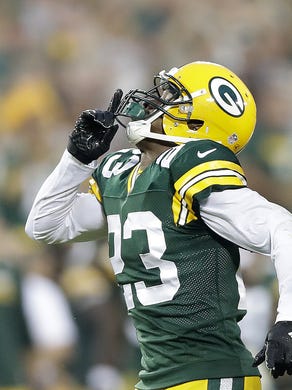 Green Bay Packers running back Eddie Lacy (27) runs behind the block of guard T.J. Lang (70) during the game against the Oakland Raiders at Lambeau Field. Jim Matthews/USA TODAY NETWORK-Wis
Fullscreen

Green Bay Packers running back Eddie Lacy (27) goes over the top for a touchdown during the game against the Oakland Raiders at Lambeau Field. Jim Matthews/USA TODAY NETWORK-Wis
Fullscreen

Packers running back Eddie Lacy breaks through the line for a 1-yard touchdown in the first quarter against the Raiders at Lambeau Field. Jim Matthews/USA TODAY NETWORK-Wis
Fullscreen

Green Bay Packers running back Eddie Lacy (27) walks off the field after scoring a touchdown in the first quarter. He was with with tight end Richard Rodgers (82) and guard T.J. Lang (70). Rick Wood, Milwaukee Journal Sentinel
Fullscreen

It could be a delicate balance between preserving Nelson and preparing him for the Packers' regular-season opener Sept. 11 at the Jacksonville Jaguars. After Thursday’s game, coach Mike McCarthy didn’t want to tip his hand.

“It’s all part of the process,” McCarthy said. “It’s good to see him pass the physical and get a little practice time the other day in the individual work. It was good for him to dress and start that process. It’s like every player, they have to eventually put their uniform on and work through individual drills.

“I think we’ll probably stay with that format with Jordy next week.”

McCarthy could change his mind about Nelson being limited to individual drills before his team’s next practice Monday. If Nelson is held out of team reps, it could indicate the Packers will keep their top receiver out against the 49ers.

Even if he doesn’t get on the field during a game, his full-pads appearance in pregame warmups was uplifting for a team that dearly missed its top receiver.

“Jordy’s a popular player in the locker room,” McCarthy said. “Everybody roots for everybody. I think any time a player comes off the PUP, especially after what he’s been through, it’s a good day. It was great to see him in his uniform. He looks good in his uniform.”