Rodgers weighs in on Kaepernick, CBA

Rodgers weighs in on Kaepernick, CBA 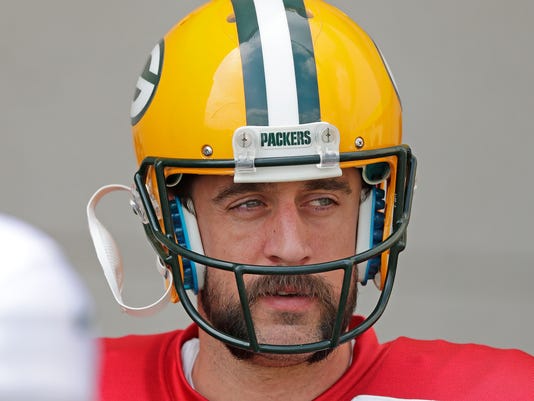 GREEN BAY - When Aaron Rodgers speaks, he knows his words carry a lot of weight. Not only with his teammates and the people inside 1265 Lombardi Avenue, but with the hundreds of thousands of Green Bay Packers fans in Wisconsin and around the world.

So when the Packers quarterback addresses hot-button issues, such as San Francisco 49ers quarterback Colin Kaepernick's refusal to stand for the national anthem before his team’s game against Green Bay last Friday night, he tends to choose his words carefully.

Rodgers recently spoke with Alex Marvez of the Sporting News, who asked him for his reaction to Kaepernick’s protest and the media firestorm that has followed. Rodgers responded:

“To me, the flag represents the greatest ideals of the United States of America, not the worst. But different people look at different things and have different feelings about it. That’s what freedom of expression is all about.

Another recent interview with Rodgers, this time with former Packers executive Andrew Brandt on Brandt’s "Business of Sports" podcast, featured the quarterback speaking about the NFLPA and the next collective bargaining agreement.

While still a ways off (the current CBA is set to expire in 2020) Rodgers appears to have given some thought to being involved in negotiations the next time the players sit down with NFL owners.

From Rodgers on the podcast:

"If I’m fortunate enough to be around for the next one, I think it could be an opportunity to help out the next generation of players, by taking maybe more of a role in that. If it’s wanted by the union, I would be open to it because I think we need some really strong leaders when we come back to the table, and realize that, as opposed to maybe the last time the CBA rolled around, that we have more bargaining power than we showed."

One topic that has generated numerous headlines this offseason, especially in Green Bay with the NFL’s investigation into Clay Matthews and Julius Peppers, has been player discipline. Asked by Brandt if he thought things needed to change on that front, Rodgers responded:

"It’s got to. It has to change. I don’t know why the owners wouldn’t want it to change, because it’s made the league look bad a few times. I read something – you know I said that I felt like we had the opportunity to make a change in the first CBA, and I stand behind that, that statement. Many guys I don’t think were aware of how strong our position could have been had we waited a little longer. One of the things that we should have maybe pushed for was to have an independent arbitrator. I don’t think we should have to give anything for that to happen in the next negotiation."

It sounds like NFL owners can expect a much more active Aaron Rodgers during the next round of labor negotiations.