The receiver had six receptions, tying Randall Cobb for the team high, along with 32 yards. 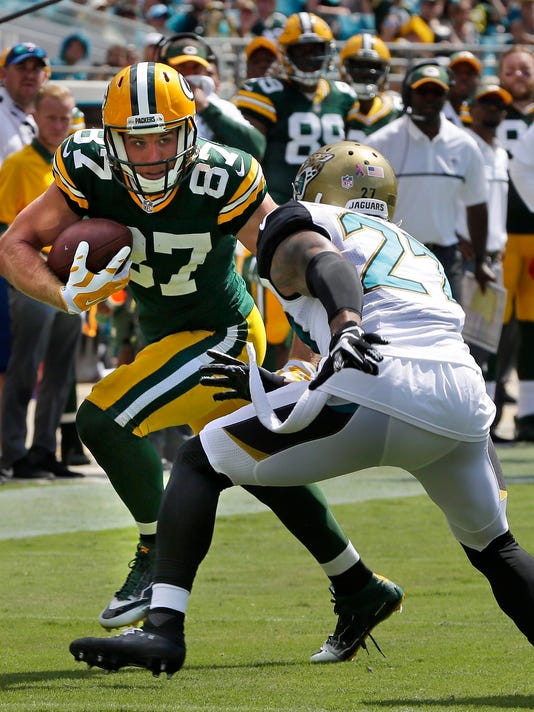 JACKSONVILLE, Fla. - Jordy Nelson didn’t even see the cornerback. The one between him and Green Bay Packers quarterback Aaron Rodgers. The one whose left hand came inches from knocking away his first touchdown catch in 21 months.

In the back of the EverBank Field end zone, Nelson had been wide open. He was trying to settle in the soft zone, lifting his arms frantically for his quarterback’s attention. Rodgers noticed. So did Jacksonville Jaguars cornerback Prince Amukamara.

Rodgers, dancing in the pocket, rifled his pass with linebacker Telvin Smith closing in. Amukamara lunged. All Nelson saw was the football.

“I didn’t really feel anyone else,” Nelson said. “Aaron is seeing a lot more than I am. Everything was behind me, and I’m trying to stay stationary as much (as possible) and kind of move with him. Obviously, he led me away from probably some stuff that he was feeling. With him moving, the ball is going to tail a little bit, too.

There’s the chemistry that was lacking in the Packers' passing game through much of last season. It returned in spurts Sunday when the Packers opened their 2016 season with a 27-23 win against the Jaguars.

Nelson took time to get going. He wasn’t targeted in the Packers' first three possessions. The first pass thrown his way opened the fourth drive, a three-and-out. Nelson ran a quick out, an automatic play with Rodgers during 2014.

This time, Rodgers misfired to the sideline.

So, yes, there was rust to knock off. Nelson played his first meaningful snaps since the 2014 NFC championship game, a 20-month drought. He finished with six receptions, tying Randall Cobb for the team high, along with 32 yards.

Yet it was fitting Nelson caught Rodgers’ first touchdown pass of the season. The two-time MVP has his favorite receiver back. On Sunday, there were flashes of what that could mean for the Packers offense.

“It feels great having Jordy back,” Rodgers said. “He does so many things well out there. He had a great second and third reaction on that TD catch.”

Nelson didn’t open up about expectations for his return over the past few weeks, primarily, he said, because of the “unknown” that awaited. From how many snaps he’d play, to how his knee would feel, to how much rust there’d be after a full year away from the game, there was no way to gauge what would happen once Nelson returned to live snaps.

He ended up playing a high percentage of the Packers' snaps, perhaps more than expected in north Florida’s sweltering heat and blanket-wrapped humidity. He survived a 16-play, 73-yard drive that chewed up 9:14 in the second half before ending with a chip-shot field goal.

After the game, Nelson hadn’t realized just how long that drive lasted.

“The third quarter went quick,” Nelson said. “I was happy about that.”

Nelson was happiest with how his knee felt. He said there were no scary moments Sunday. No low hits that spiked his heart rate.

He may not have been the Jordy Nelson of 2014. Not yet. For the first time in a long time, Nelson was able to forget about his right knee, and just play.

“When I was out there,” Nelson said, “I wasn’t even thinking about it.”

Green Bay Packers teammates spill out in the field after the defense stopped a drive in final seconds of the game insuring the Green Bay Packer 27-23 win over the Jacksonville Jaguars. Rick Wood/Milwaukee Journal Sentinel
Fullscreen 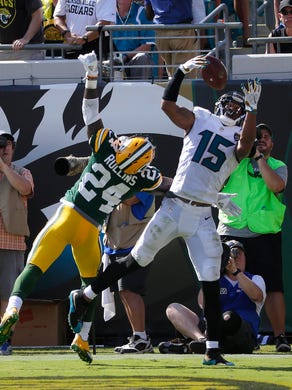 Jacksonville Jaguars quarterback Blake Bortles (5) scrambles for a 7 yard gain in the 4th that was negated by a penalty. Rick Wood, Milwaukee Journal Sentinel
Fullscreen 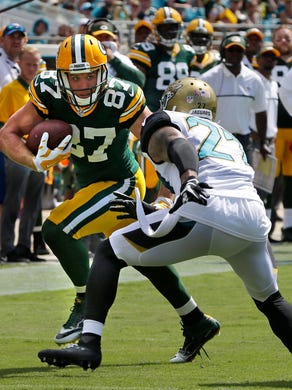 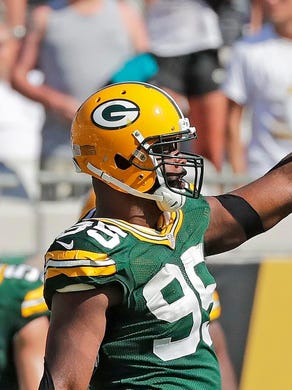 Green Bay Packers running back Eddie Lacy (27) gets flipped by defensive back Tashaun Gipson (39) on a long run against the Jacksonville Jaguars at Everbank Field. Jim Matthews/USA TODAY NETWORK-Wis
Fullscreen 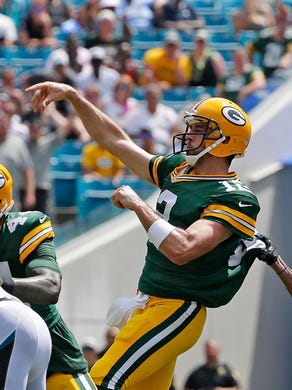 Jean Yurk of Sheboygan wears her heavily decorated cheesehead, complete with old game tickets and a Santa Claus train, as she chants Go Pack Go! before the game against the Jacksonville Jaguars at Everbank Field. Jim Matthews/USA TODAY NETWORK-Wis
Fullscreen

A water taxi full of Packers fans disembarks at a stop along the St. Johns River near the stadium before the game against the Jacksonville Jaguars at Everbank Field. Jim Matthews/USA TODAY NETWORK-Wis
Fullscreen 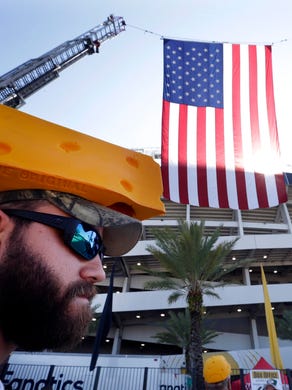 Cody Bennington, Miami Florida shows of his cheesehead while viewing a 9/11 memorial before the season NFL football opener between the Green Bay Packers and the Jacksonville Jaguars. Rick Wood/Milwaukee Journal Sentinel
Fullscreen

A Green Bay fan wipes her neck to in sweltering heat before the season NFL football opener between the Green Bay Packers and the Jacksonville Jaguars. Rick Wood/Milwaukee Journal Sentinel
Fullscreen 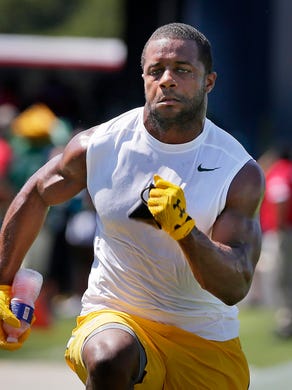 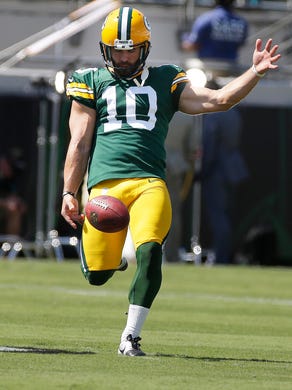