Quinten Rollins got burned early, but "it’s not about how you start, it’s how you finish." 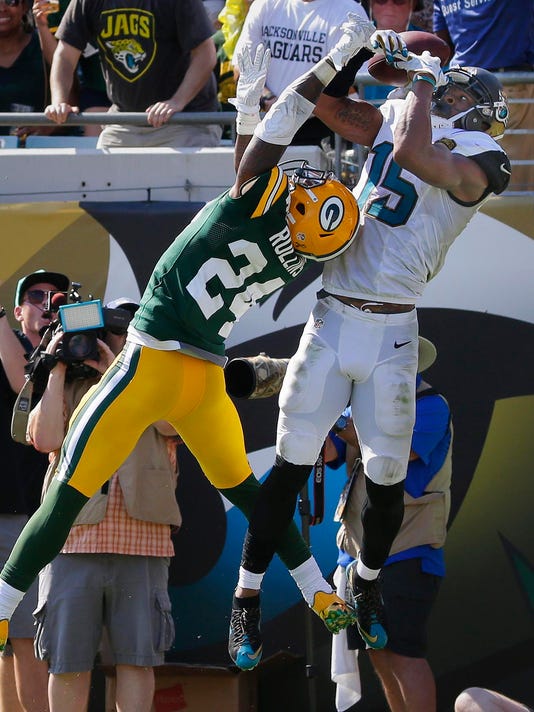 Blake Bortles’ pass hung midair, it seemed, in slow motion. Rollins tried to box out Robinson, one of the NFL’s promising, young receivers, like a point guard battling for a rebound. There was less than a minute remaining in Jacksonville, the Packers nursing a four-point lead, when Rollins and Robinson jostled in the end zone’s left corner.

In that moment, yes, Rollins knew Sunday’s opener against the Jaguars hung in the balance.

“It’s definitely in your mind,” Rollins said. “Because with things like that, he can see me. I can’t see him.”

Rollins knew it was a precarious situation. He was relieved when Bortles’ pass deflected off his fingertips and through Robinson’s hands before finally bouncing off Robinson’s facemask, incomplete.

“If he would’ve jumped and got on my back,” Rollins said, “that would’ve weighed me down. So I probably wouldn’t have had the elevation to get up and get my hands on the ball to get the play stopped. It’s definitely a trying position, but at the same time, all of that’s out the window. You just have to make a play.”

Rollins didn’t need any more plays to go against him Sunday. A slew of first-half mistakes led to both Jaguars touchdowns. Eventually, Rollins was briefly benched.

In the first quarter, Rollins whiffed trying to tackle tight end Mercedes Lewis near the line of scrimmage. Lewis gained 37 yards on a play that could’ve been snuffed out for zero.

Later, Rollins bit on a double move against receiver Allen Hurns on what became a 30-yard catch. On the same drive, tight end Julius Thomas beat Rollins for a 22-yard touchdown a little more than one minute before halftime.

Rollins admitted he has to “tighten up on some things” before the Packers play Sunday night at the Minnesota Vikings. On the double move, Rollins said, his eyes got caught in the backfield instead of watching Hurns.

By halftime, Rollins said, the bad drive was “flushed” from his mind. It’s life as an NFL cornerback. Bad plays are quickly forgotten.

With the Jaguars driving for a potential game-winning touchdown later in the fourth quarter, Rollins didn’t just expect Bortles to target him. He hoped the pass would be thrown his way. Here, he knew, was a chance for redemption.

“That’s about your character,” Rollins said. “Who you are, and how you go about things. So it wasn’t no shock to me. I knew I got off to a slow start, but it’s not about how you start. It’s about how you finish.

“Now, if I didn’t make that play, we’d be having a different conversation right here, because that’s a totally bad day. But I started off strong, and then midway through I know I got shaky, and toward the end – it’s not about how you start, it’s how you finish – I made a play.”

Rollins figures to be a key player in Minnesota. Sam Shields, the Packers’ top cornerback, is once again going through concussion protocol. His availability against the Vikings is unknown, though it would seem unlikely.

As one of the Packers' top three cornerbacks, Rollins was expected to play a significant role in the secondary this season. Defensive coordinator Dom Capers, citing the Jaguars’ track record of producing big plays in their passing game, said Sunday’s struggles didn’t cost his second-year cornerback.

“When you’re playing out there on an island,” Capers said, “you’re going to lose some. But I like the way he battled back. He made a really big play there at the end of the game where they tried to throw the ball up to Robinson, who’s one of the better go-deep and go-up-and-win-the-one-on-one-battles (receivers). I thought that’s the best thing that he did.

“I was encouraged the way Quinten battled through those things. You’re going to have some (mistakes). You’ve got to have a short memory out there, and you’ve got to come right back and make your plays. You can’t let it affect you, and I thought he battled through.”