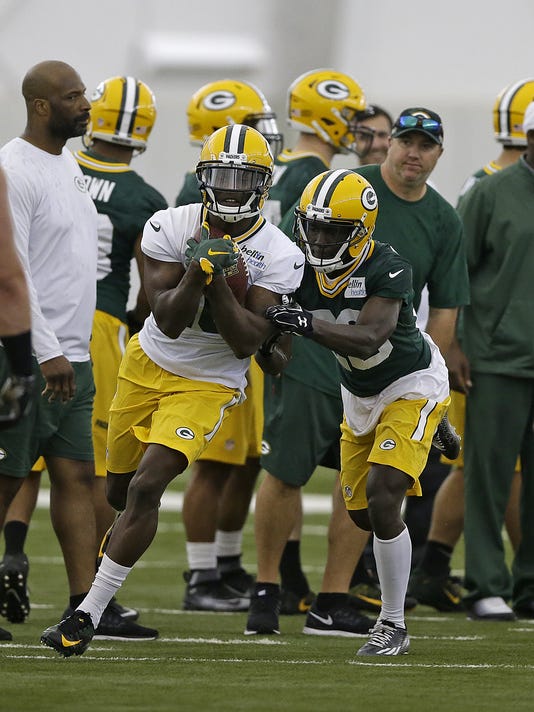 GREEN BAY - It's not often that a player on the practice squad evokes questions of both Mike McCarthy and his assistants during press conferences, but Herb Waters found himself a rare exception to the rule this week.

Beginning Wednesday, when the Green Bay Packers took the field for their first practice of the week, Waters donned a green jersey, the color reserved for defensive players. While the starters went through play cards, Waters received one-on-one instruction from cornerbacks coach Joe Whitt Jr. on the side of the field. He practiced backpedaling instead of running forward off the line of scrimmage.

Four months ago, Waters arrived in Green Bay as an undrafted wide receiver from Miami. Now, just two weeks into the season, he is starting fresh as a practice squad cornerback.

"I’ve done it before, starting back at Louisville with taking Antoine Harris two weeks before we opened up (the season), and so it’s the same thing," Whitt said. "I’ve done it many years. We’re just going to look at it and see what the kid can do. He has some skill sets that I like, I’m interested in and I’m excited to work with him."

Any intrigue Whitt and the coaches had was likely matched by a level of necessity. The Packers are down three cornerbacks from the six retained by general manager Ted Thompson on his initial 53-man roster. Sam Shields (concussion), Makinton Dorleant (hamstring, injured reserve) and Josh Hawkins (hamstring) have all been lost in the last two weeks.

It leaves the Packers with just three true cornerbacks on the active roster — Damarious Randall, Quinten Rollins, LaDarius Gunter — and a potential lack of bodies during practice, especially when trying to field a competitive scout team to challenge the starting receivers.

So Whitt set aside a portion of this week's practice time to begin teaching Waters the basics of the position. Waters, who stands 5-11½ and weighs 192 pounds, ran the 40-yard dash in 4.50 seconds coming out of college. That's significantly faster than Gunter (4.69 seconds), the new No. 3 behind Randall and Rollins, but slower than last year's practice squad cornerback Robertson Daniel (4.46 seconds).

"I don’t necessarily look at anything other than skill sets," Whitt said, "and he has the skill set that I like. He has long arms, he can bend, he has good balance, he has the height. And so now can we work those skill sets into playing defensive back. That’s my challenge and I’m excited to work with him."