MINNEAPOLIS - When the visiting locker room opened, cornerback Damarious Randall wore green shorts, no shirt and had fixed his gaze on the iPhone plucked from his locker. A reporter asked for an interview, and Randall asked for a bit more time.

So he scrolled through his phone as the cameras and microphones began to gather. He typed a message. He scrolled some more.

When he rose from his seat and dressed, Randall moved deliberately — black T-shirt, black sandals, gold-framed sunglasses stowed carefully away — and temporarily delayed an interview he did not want to give.

INSIDER: Thumbs down to Randall, up to run defense

Randall was elevated into the No. 1 cornerback spot as Sam Shields recovered from his fifth concussion. He drew the assignment of wide receiver Stefon Diggs, the unquestioned alpha for a Minnesota Vikings team that, on the perimeter, has precious few. And the assignment came back failed.

The Vikings harassed Randall for the entirety of Sunday night’s unveiling of U.S. Bank Stadium, his unsightly performance broadcast to an audience stretching nationwide. Diggs caught nine passes for 182 yards — both game-high totals and career-high totals — as the chemistry with new starting quarterback Sam Bradford blossomed in an instant. He caught a 25-yard touchdown pass, accounted for 69 percent of his team’s total yards and drew the pass interference penalty that ultimately preserved the Vikings’ 17-14 win.

“I mean, him and Bradford are just in sync with timing,” Randall said. “They was throwing on time, and when quarterbacks and receivers throw on time they’re very tough to stop.”

The cruel irony of Randall’s performance was rooted in the comments made by his position coach, Joe Whitt Jr., four days prior to kickoff in Minnesota. With Shields’ condition uncertain, Whitt spoke of the unwavering confidence and bravado of his second-year corner, the first-round pick by the Green Bay Packers in 2015. He praised Randall for maturing as a player, for opening the season with an impressive performance in Jacksonville and for taking “the step that we need him to take to be the guy that we need him to be.” 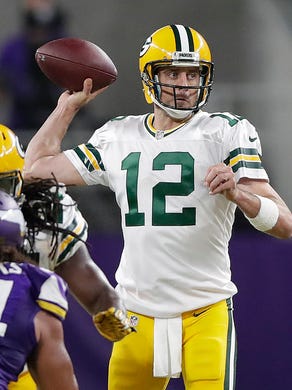 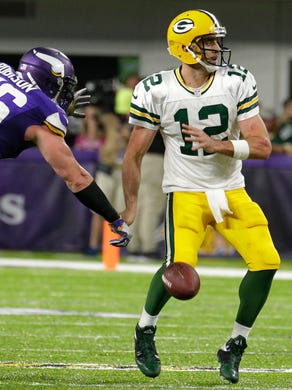 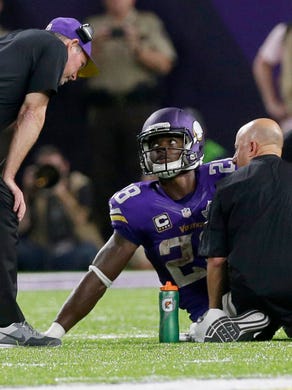 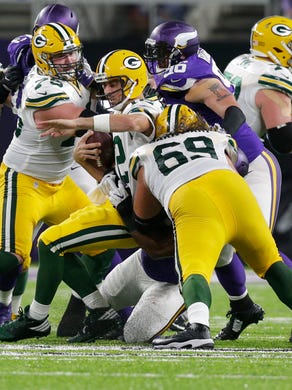 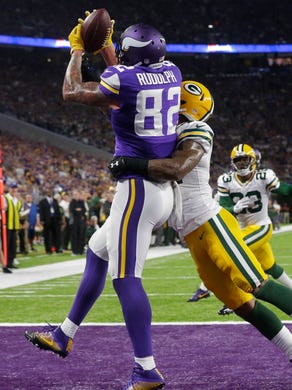 The Minnesota Vikings' battle horn, which will be blown before the start of each game. Mark Hoffman, Milwaukee Journal Sentinel
Fullscreen

A pair of 55-foot wide doors that open to the outside are shown at U.S. Bank Stadium. Mark Hoffman, Milwaukee Journal Sentinel
Fullscreen 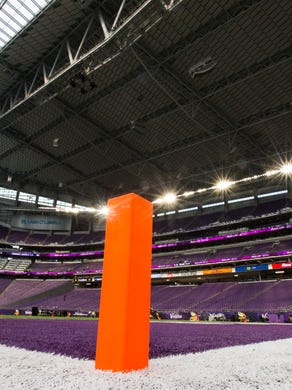 Fans queue up to enter U.S. Bank Stadium near a mock up of a Vikings ship. Mark Hoffman, Milwaukee Journal Sentinel
Fullscreen

Vikings cheerleaders practice on the field of the new $1.1 billion U.S. Bank Stadium in Minneapolis before the game between Green Bay and Minnesota on Sunday. Mike De Sisti, Milwaukee Journal Sentinel
Fullscreen 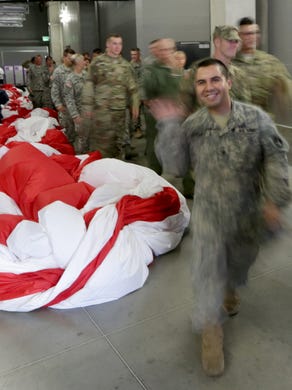 Members of the U.S. Armed Forces walk past a folded up an American Flag while practicing the pregame ceremony in U.S. Bank Stadium. Mike De Sisti, Milwaukee Journal Sentinel
Fullscreen

A lone Packers fan wearing a cheesehead walks through the crowd outside U.S. Bank Stadium in Minneapolis before the game against Green Bay. Mike De Sisti, Milwaukee Journal Sentinel
Fullscreen

But Randall met his foil in Diggs, an explosive player who caught 59 passes for 823 yards and four touchdowns as a rookie last season. And while the Vikings used a first-round pick on a wide receiver in May — they took Laquon Treadwell from Ole Miss — training camp ended with Diggs as the only legitimate threat.

“He’s a playmaker,” defensive back Micah Hyde said. “He’s a small little jittery guy but he makes plays. He did it all last year, his rookie year, and he’s doing it again. He’s a guy that gets them going. Obviously, we stopped their run game. And the pass game, he was tough.”

The damage Diggs inflicted on Randall looked like this: a missed tackle that opened up a 15-yard gain; a fourth-down conversion on a drive that ended with a touchdown; a 44-yard reception deep down the middle of the field; a 46-yard reception on a crossing pattern from right to left; a 25-yard touchdown that gave the Vikings a 10-point lead.

Randall had lapsed before. A year ago, fellow rookie Amari Cooper abused Randall in a Packers’ victory over the Oakland Raiders. Cooper caught nine passes for 120 yards and two touchdowns as Shields recovered from yet another concussion.

Had Shields been healthy, he would have matched with Diggs on Sunday.

“It’s a big loss because (Shields) is one of the leaders in our group,” safety Morgan Burnett said. “He’s one of our best cover guys on our team. Any time you get a veteran guy go down, you miss that leadership. Then you miss his playmaking ability.

“But not taking away from none of those guys (we have), because anybody in that room can make plays and they have made plays and proven themselves. You just take it as a learning curve. You learn from it, you grow and you move on.”

Despite the gashing, Randall faced a moment of potential redemption with less than two minutes remaining in the fourth quarter. Trailing by three, the Packers needed a stop to give quarterback Aaron Rodgers a chance. And predictably, the Vikings returned to Diggs’ well.

On third-and-6, Bradford fired to Diggs on a slant from left to right. Randall dove to make the play as the ball fell incomplete.

But an official threw a flag — pass interference, an automatic first down — and Randall’s night was horrible indeed.

“I was coming into the game ready,” Randall said. “I guess I just didn’t have it tonight."