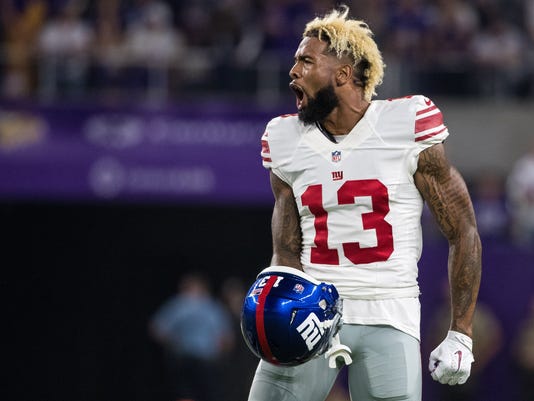 GREEN BAY - If the Green Bay Packers are planning on getting under New York Giants receiver Odell Beckham Jr.’s skin, they’re doing a good job of hiding it.

Cornerback Damarious Randall, who probably will draw a fair amount of the coverage against the Giants' star receiver, said he isn't interested in anything but the tape that shows what Beckham can do with a football.

Coach Mike McCarthy chose to skip any discussion of the meltdown Beckham had against the Minnesota Vikings at U.S. Bank Stadium on Monday night.

Quarterback Aaron Rodgers talked only about how his team goes about harnessing the fueled-up emotions that have dogged the tremendously talented Beckham and led him to draw penalties and fines.

How Beckham will react Sunday night when the Giants visit Lambeau Field is anybody’s guess. The Packers say they are focused on their emotions and not the ones across the line of scrimmage.

“We encourage our guys to be themselves,” Rodgers said. “You can’t keep a guy like Mike Daniels quiet. You love that passion out there on the field. We talked about it a couple of games ago, ‘Hey, express yourself.’

“We need more of Jordy Nelson catching the ball and getting the fans involved. We all kind of ribbed him a little bit, but we loved that. We loved the energy and the emotion and the passion out there. You just can’t let it affect your team in a negative way.”

Beckham slugged it out with Vikings cornerback Xavier Rhodes, who drew the Giants receiver into a grudge match similar to his brawl last season with then-Carolina cornerback Josh Norman. There weren’t as many fisticuffs, but Beckham was frustrated over a borderline late hit from Rhodes and the blanket coverage the Vikings placed on him.

Like Rodgers, Giants coach Ben McAdoo said he doesn’t want to strip Beckham of his fierce competitive spirit and wants him to be himself.

“I like him as a salty, competitive player,” McAdoo said Wednesday at his news conference at the Giants' facility. “That’s when he plays at his best. We just need to be productive when we’re doing it.”

Asked about Beckham during a conference call with local reporters, Giants quarterback Eli Manning said he understood Beckham’s frustration with his lack of production and said it’s frustrating to everyone when they can’t get the ball to their best receiver.

“He's a talented player,” Manning said. “He works extremely hard. You know he wants to go out there and make plays. I've seen that a lot of times with playmaker and guys who have put in a lot of effort, a lot of work and want to feel like they're getting rewarded on game day and getting catches and being part of the offense, and hey, I'm with him.”