Former Packers coaches are 21-41 vs. their old team since 1996. None has a winning record. 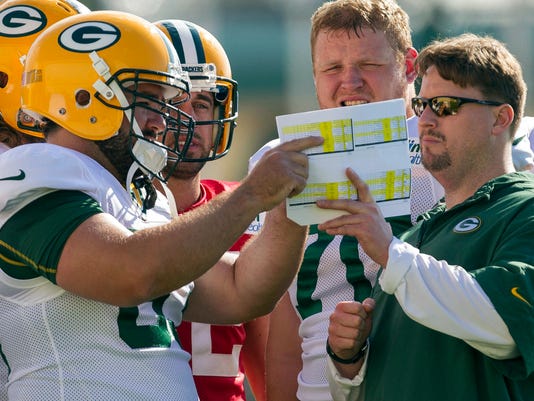 In this July 28, 2012, file photo, then-Green Bay Packers quarterbacks coach Ben McAdoo, right, talks with center Jeff Saturday (63), quarterback Aaron Rodgers (12) and offensive guard T.J. Lang (70) talk during training camp in Green Bay, Wis. McAdoo will catch up with old friends when he returns to Lambeau Field to coach the New York Giants in a game against the Packers on Sunday.(Photo: Mike Roemer/AP)

GREEN BAY – When Ben McAdoo brings in his New York Giants on Sunday evening, it will be the 63rd time in the past two decades the Green Bay Packers have faced a head coach who once was one of their own.

If the Giants (1-3) beat the Packers (2-1), he will be the only one of those coaches with a winning record against his old employer.

“I’m not someone who’s overly emotional or dramatic or any of those types of things,” McAdoo said this week, clearly well-schooled in the McCarthy not-going-to-get-off-track approach. “I like to take care of the task at hand and focus on my work.”

Given the record of those who have faced their old team, McAdoo is smart to focus on getting his team ready, especially coming off a 24-10 shellacking by the Minnesota Vikings at US Bank Stadium Monday night.

The Giants are playing back-to-back road games on a short week and their injury report looks a lot like the one the Packers had against Detroit two weeks ago. It will be a tall task for McAdoo to pull off a victory on the Packers’ home field.

Of the nine, Holmgren (Seattle), Ray Rhodes (Philadelphia, 1-2), Marty Mornhinweg (Detroit, 0-4) and Joe Philbin (Miami, 0-1) are the only ones to coach all their games against the Packers with the same team.

In some cases, the former coach was facing a different coaching staff coaching different personnel than what was in place when he was there. Coughlin, for instance, became a head coach in 1995 with the Jacksonville Jaguars, eight years after he left Green Bay.

The Packers had cycled through Forrest Gregg and Lindy Infante and were being coached by Mike Holmgren when Coughlin coached his first game against the Packers. So, there were very few connections, if any, left for him.

But as Packers head coach Holmgren faced Rhodes in ’96, ’97 and ’98 and as Seattle coach he faced Rhodes, then Green Bay’s coach, in ’99. Holmgren also faced Steve Mariucci, when Mariucci was with the 49ers.

McCarthy will be facing his second protégé.

The first was Philbin, who left after the 2011 season to become Miami’s head coach. The Packers traveled to Miami in 2014 and pulled off one of the team’s best comebacks under McCarthy, scoring the winning touchdown with three seconds left in a 27-24 thriller.

The Packers came into the game having scored 38 and 42 points in their previous two games against Minnesota and Chicago, but were shut down by the Dolphins for most of the game. Philbin had intimate knowledge of the Packers’ offense, its play calls and it’s personnel. It was obvious he had delivered critical information to his defensive coordinator Kevin Coyle.

“They did a great job,” quarterback Aaron Rodgers said after the game. “Obviously Joe did a great job coaching them up with the silent cadence because they were getting off the ball really quick.”

McAdoo is less than two years removed from knowing the Packers’ offense and defense and better yet he was Rodgers’ position coach before he left so he knows what Rodgers likes and what bothers him. You can bet he’s funneling all that information to defensive coordinator Steve Spagnuolo.

The big question for the Packers is how much do they change to accommodate for what McAdoo knows.

“I think it’s like everything, communication and language is important in the game of football, and really how you express it is where you have to focus on change,” McCarthy said. “We’re not going to change how we communicate or what we say and so forth, just really the communication overall, we’re obviously very aware.”

In other words, they’re going to change everything they say, just not the way they say it.

McAdoo also knows defensive coordinator Dom Capers’ system inside and out, having practiced against it in training camp and seen it played week after week. McAdoo also knows a good deal of the personnel on defense and will use that to his advantage.

“They’ll have some things that they’re going to feel really good about in terms of what they’ve seen from us on video, and it goes both ways. It should be a great challenge. But Ben, I’m sure he’s going to have something for us. We’ll wait and see. We’d be foolish not to expect that.”

As far as whether McAdoo can provide his defensive coordinator with the same information Philbin did, the Packers will have to wait and see. But in typical McCarthy fashion, offensive coordinator Edgar Bennett said that wasn’t the coaching staff’s focus.

“Our focus is really more on who we are and what we do and ways that we can better, ways that we can improve,” Bennett said. “That’s the goal to go out and execute and play at a high level. As far as, certainly you take all that into consideration, but you keep the focus on us.”