GREEN BAY - The final carry by rookie sensation Ezekiel Elliott was, quite fittingly, a 3-yard plunge that picked up a first down. He burst through the middle of his road-grading offensive line and, upon crossing the 40-yard line of the Green Bay Packers, iced a victory ripe with humiliation.

Players from both teams jogged across the field as the final seconds melted away from a lopsided football game. Some stopped to shake hands and trade jerseys. Others veered toward their respective locker rooms.

And off to the right, in the south end zone of Lambeau Field, the offensive line of the Dallas Cowboys posed for a photograph. The scoreboard behind them read as follows: Cowboys 30, Packers 16.

“It sucks,” defensive end Mike Daniels said. “We let them come in here and prove that they are who everybody thinks they are. And that’s what pisses me off the most.”

RELATED: Hard for Packers to ignore their offensive mess

D’AMATO: Packers are in a real fix

INSIDER: Thumbs down to LaDarius Gunter

Who everybody thinks they are is the best rushing offense in the National Football League, a notion reinforced by Sunday’s remarkable display. Led by Elliott, who finished with 157 yards on 28 carries, his fourth consecutive game with 100 yards or more, the Cowboys dismembered a run defense that sat atop nearly every statistical category. The historic four-game start by the Packers was immolated at the hands of a tenacious offensive line that mauled them early and abused them late.

In the home locker room, safety HaHa Clinton-Dix winced as the Cowboys’ rushing numbers were recited. A defense that had yielded just 2 yards per carry during the season’s first month was shredded for 5.8 on 33 attempts. A defense that surrendered just 42.8 yards per game entering Sunday was gutted for 191.

“Man, it’s a heart thing,” Clinton-Dix said. “It ain’t nothing you can prepare for. You either want to do it or you don’t, you know?

“When they’re gaining three, four, five yards on first down, you get in those third-and-shorts, right? And they’re going to run the ball because they have a great offensive line. It’s kind of hard to stop.”

If it was hard to stop, it was harder to swallow. The Cowboys, who have invested three first-round picks in their offensive line, did not incorporate any new wrinkles as they gobbled up yards in chunks. It was everything the Packers had seen on film, according to outside linebackers Datone Jones and Julius Peppers, and the Cowboys are adamant that no team can stop them.

Such belief overflowed inside the visitor’s locker room, where smiles and laughter were bountiful, even for wide receiver Dez Bryant, who gladly entertained questions from the media despite the fact that he did not play.

A few feet away from Bryant, near the back of the room, two players chortled as they discussed the vaunted run defense of the Packers. Two yards per carry? An average of 40 yards allowed per game? They smirked. And then they laughed.

“I told you them stats were screwy,” one player said. “That (expletive) wasn’t true.”

It certainly didn’t appear that way Sunday, what with Elliott rampaging across the line of scrimmage and the Packers’ defenders lunging at ghosts. He had eight carries of four or more yards in the first half and added seven more in the second, including six in the fourth quarter alone.

He forced three missed tackles on a single play early in the fourth quarter — Peppers and cornerback LaDarius Gunter were among the whiffed — and churned out 12 yards deep into Green Bay territory. When linebacker Blake Martinez finally shoved him out of bounds at the 14-yard line, Elliott took several steps toward Packers fans and motioned, quite boastfully, that he was hungry for more.

“I think when you run, when you keep going with the 5s, the 6s it kind of wears them down and then you break a big one,” said Ronald Leary, left guard for the Cowboys. “So that’s kind of what we try to do. The run game, you know, it’s just big guys leaning on you a lot of times. That gets tiring.”

By the final drive, the Packers had succumbed. Elliott picked up five yards on first down, three yards on second and one yard on third. Three more feet would seal the win.

So he took the fourth-down handoff and simply plowed ahead.

“This is a good football team,” Peppers said. “They’re very good all the way around. I think it came down to us not doing the things we normally do like missing tackles, being a little undisciplined, jumping out of gaps and things like that trying to make plays. You give them credit, but I think it was also a little bit of us not playing our game.” Packers fans sit in the stands after the loss to the Cowboys. Mike De Sisti, Milwaukee Journal Sentinel
Fullscreen 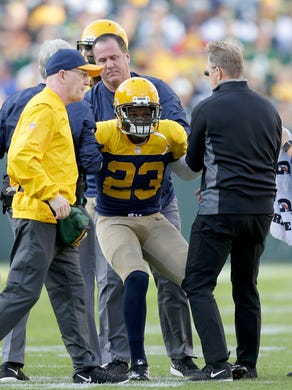 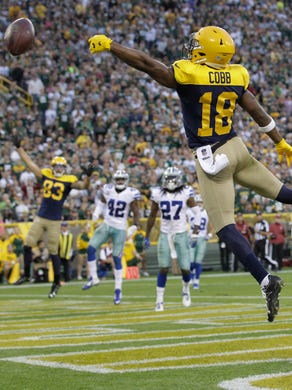 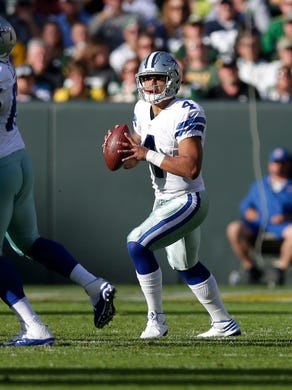 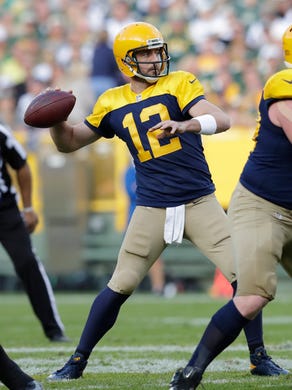 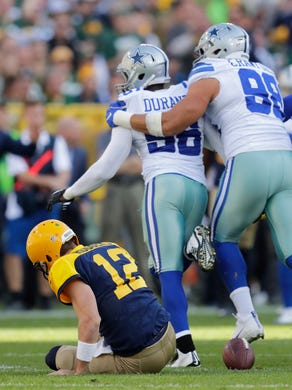 Green Bay Packers head coach Mike McCarthy talks to Aaron Rodgers on the sidelines after Rodgers fumbled the ball near the goal line in the second half against the Dallas Cowboys at Lambeau Field. Dan Powers/USA TODAY NETWORK-Wis
Fullscreen

Brett Favre kisses his wife Deanna after he appeared in the halftime ceremony to honor his induction into the Pro Football Hall of Fame. Mike De Sisti, Milwaukee Journal Sentinel
Fullscreen

Brett Favre stands in the tunnel moments before he appears at the halftime ceremony to honor his induction into the Pro Football Hall of Fame. Mike De Sisti, Milwaukee Journal Sentinel
Fullscreen

Brett Favre's name is unveiled with all the Packers players who have been enshrined in the Pro Football Hall of Fame. Mark Hoffman, Milwaukee Journal Sentinel
Fullscreen

Brett Favre pats a bronze bust of himself before being presented with his Pro Football Hall of Fame ring at halftime Sunday. Mark Hoffman, Milwaukee Journal Sentinel
Fullscreen 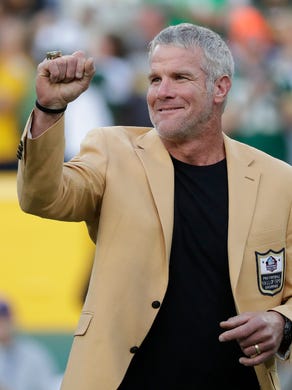 Brett Favre shows off his Pro Football Hall of Fame ring after receive it during halftime of the game against the Dallas Cowboys at Lambeau Field. Jim Matthews/USA TODAY NETWORK-Wis
Fullscreen

A food platter is shaped like a Dallas Cowboys skeleton before the Green Bay Packers game against the Dallas Cowboys at Lambeau Field in Green Bay, Wis. on Sunday, October 16, 2016. Mike De Sisti/Milwaukee Journal Sentinel
Fullscreen