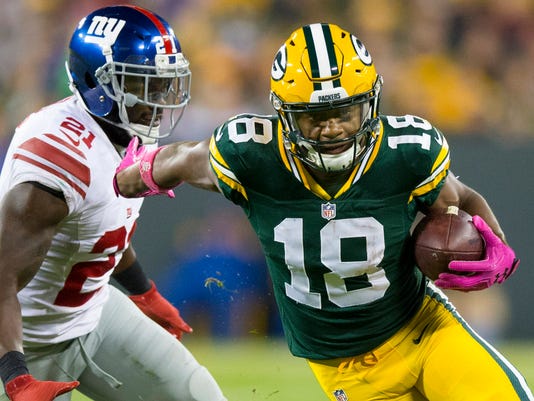 GREEN BAY - The Green Bay Packers will have wide receiver/running back Ty Montgomery available for their game Sunday against the Indianapolis Colts. Randall Cobb is another story.

The Packers listed Cobb as questionable, making it appear that his status would be determined either after practice Saturday or before the game Sunday. Cobb missed the Atlanta game with a hamstring pull and was a limited participant in practice this week.

Montgomery, who missed the Atlanta game because of illness, was not given a designation, which means he has been cleared to play.

Running back James Starks, who returned to practice this week following minor knee surgery, has been declared out. Even though Starks had a good week of practice, the Packers decided to wait another week before clearing him.

Tight end Jared Cook (ankle) also is out. He practiced on a very limited basis during the week.

Linebacker Clay Matthews (hamstring) and cornerback Quinten Rollins (groin) were both listed as questionable. Matthews has a much better chance of playing based on practice this week.

Guard T.J. Lang (hip) was not given a game status, meaning he's expected to play.

Adams, Langford, Mewhort and Reitz are all starters.

The Colts will be scrambling to fill the two spots on the offensive line, which has been a mess all season. Rookie Joe Haeg is expected to start at right tackle for a second straight game, but the starter at left guard remains up in the air, possibly backup center Jonotthan Harrison.

Clayton Geathers and rookie T.J. Green will start with Adams out.