Insider: Thumbs down to pass rushers

Instead of putting the Colts in unmanageable down and distances with timely sacks, the Packers settled for two sacks

Insider: Thumbs down to pass rushers

On a day when the Packers had a chance to erase the one-game lead the Minnesota Vikings had taken on them with an early season victory at U.S. Bank Stadium and stay a step ahead of the Detroit Lions (5-4), they showed themselves to be a broken team. And that’s only if you thought they were NFC contenders when the season started because it’s very possible they’re nothing more than a collection of middling mediocrity. By virtue of their 31-26 loss at home to the 4-5 Indianapolis Colts, they dropped to 4-4 and fell into third place in the NFC North and a tie for eighth in the conference with New Orleans and Philadelphia. The Packers’ issues on offense resurfaced a week after it appeared they had found some solutions and they added special teams to the list of broken parts they’ll be looking to fix the second half of the season. The defense, missing linebacker Clay Matthews for a second straight week, could barely penetrate Indianapolis’ B League offensive line and once again faltered when the team needed it the most at the end of the game. The Packers now head out on a three-game road trip against Tennessee, Washington and Philadelphia moving closer to the cliff’s edge.

It probably came while a portion of the crowd at Lambeau Field and the viewers at home were still getting themselves situated for three-plus hours of entertainment. In a mere 13 seconds, the Colts turned the Packers’ home-field advantage on its ear, as Jordan Todman fielded Mason Crosby’s opening kickoff at the 1-yard line, found a hole between Ha Ha Clinton-Dix and Kentrell Brice and zipped down the left sideline for a 99-yard touchdown. Just like that it was 7-0, and Indianapolis showed it was not going to go weakly into its bye week. The fired-up crowd all of a sudden went silent and the onus fell on the Packers’ inconsistent offense to respond. When all quarterback Aaron Rodgers and the rest of the unit could muster was a field goal, the Colts were in business. The last time the Packers had given up a kick return touchdown was Nov. 9, 2014, against the Chicago Bears, so the shock of it reverberated all through the stadium. The Colts were in control and the Packers were on the defensive.

RELATED: Clinton-Dix has range of emotions

It’s hard to find anything positive to say about the Packers’ performance, but one thing that is becoming more and more apparent, and will have to be exploited more in the future, is the threat Ty Montgomery provides with both his running and receiving ability. Montgomery rushed just seven times, yet he produced 53 yards and has now gained 119 yards on 21 carries this season, averaging 5.67 yards per carry. He also added 38 yards on three receptions, giving him 23 catches for 202 yards this season, meaning he’s averaging 7.3 yards every time he touches the ball. It’s obvious Montgomery has power in his stride. He carried tacklers down the field before finally going down. At this point, he is the Packers’ No. 1 halfback, but they’re not using him like that. With just seven carries, his role probably still qualifies as a gimmick.

The Colts were playing with their sixth offensive line starting lineup combination and it included a backup center starting at left guard, a backup at right tackle and a guy coming off one of his worst games at left tackle. With that in front of them, the Packers’ front seven had to be counting the hours until this game started. But instead, it appears they were just going through the motions, choosing to grant the Colts’ line a pass. Colts quarterback Andrew Luck is terrific at avoiding the rush, but he had been sacked a league-high 31 times and was ripe for the punishing. Instead of putting the Colts in unmanageable down and distances with timely sacks, the Packers settled for two sacks, 1½ of them by safeties Morgan Burnett and Ha Ha Clinton-Dix. The biggest hit on Luck came from another defensive back, Micah Hyde, whose shot to Luck’s chest hurried him into throwing an interception to Clinton-Dix. Nick Perry, Julius Peppers, Datone Jones and Mike Daniels contributed a half sack and two quarterback knockdowns. In the three games Matthews hasn’t played, the Packers have seven sacks. 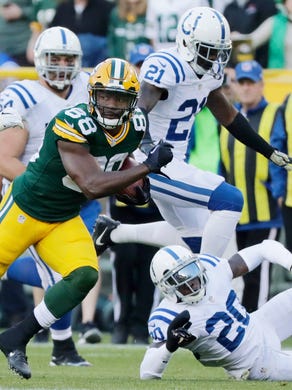 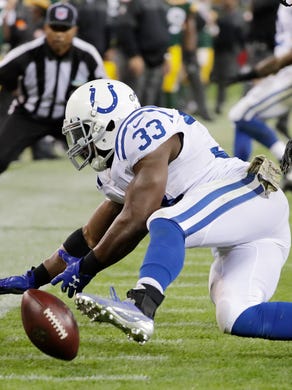 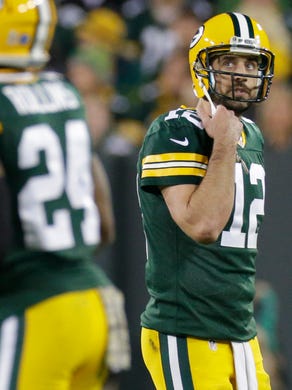 As the defense takes the field, Green Bay Packers quarterback Aaron Rodgers (12) watches the replay on his way to the sideline after throwing an interception during the third quarter of their game Sunday, November 6, 2016 at Lambeau Field in Green Bay, Wis. The Indianapolis Colts beat the Green Bay Packers 31-26. Mark Hoffman/USA TODAY NETWORK-Wis
Fullscreen

Indianapolis Colts wide receiver T.Y. Hilton (13) picks up five yards on a reception before being knocked out of bounds by Green Bay Packers outside linebacker Kyler Fackrell (51) during the first quarter of their game Sunday, November 6, 2016 at Lambeau Field in Green Bay, Wis. The Indianapolis Colts beat the Green Bay Packers 31-26. Mark Hoffman/USA TODAY NETWORK-Wis
Fullscreen

A squirrel runs over a photographers lap during the 3rd quarter of Green Bay Packers 31-26 loss against the Indianapolis Colts at Lambeau Field in Green Bay, Wis. on Sunday, November 6, 2016 Mike De Sisti/USA TODAY NETWORK-Wis
Fullscreen 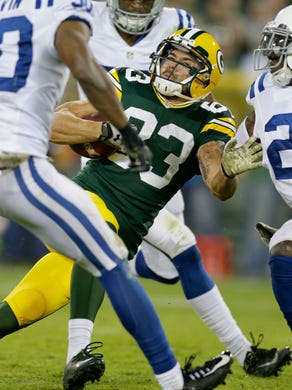 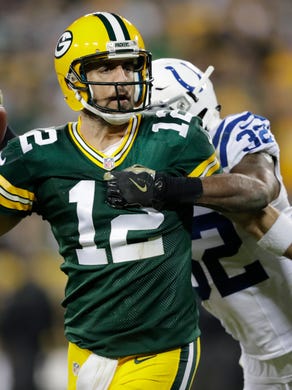 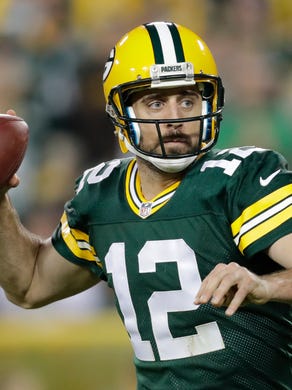 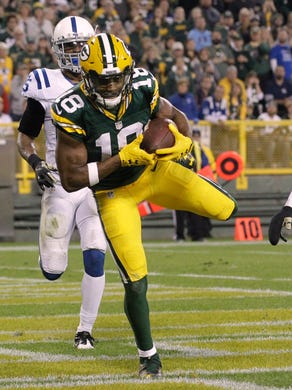 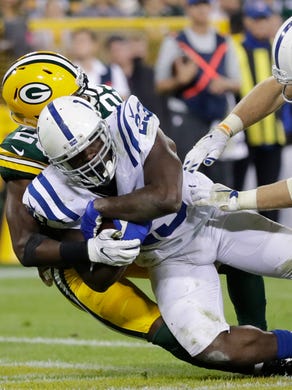 8. Andrew Luck, Indianapolis Colts ($24,594,000 Avg./Year) The Colts signed Luck to a five-year contract extension worth $122,970,000 in June 2016. Indianapolis won only two games in 2011 before Luck arrived, but went 11-5 and made the playoffs each of Luck’s first three seasons as the team transitioned from Peyton Manning. Luck averaged 4,319 yards passing per season his first three years and led the NFL in touchdown passes in 2014 with 40. More recently, Luck missed all of the 2017 season recovering from a shoulder injury. He is expected to be back under center for the Colts this fall. Mike De Sisti/Milwaukee Journal Sentinel
Fullscreen 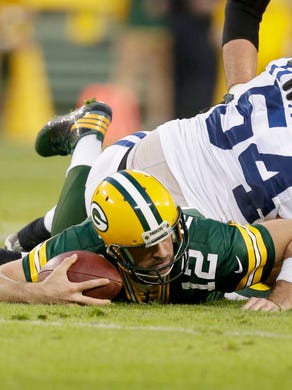 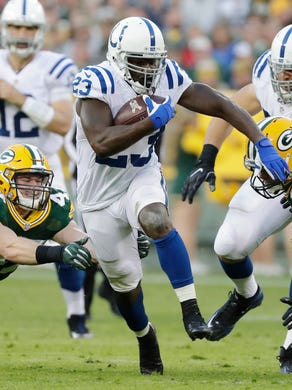 Indianapolis Colts running back Jordan Todman (28) returns a kick off 99 yards for a touchdown during the first quarter of their game against the Green Bay Packers Sunday, November 6, 2016 at Lambeau Field in Green Bay, Wis. Mark Hoffman/USA TODAY NETWORK-Wis
Fullscreen 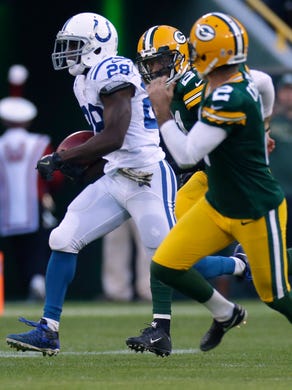 Indianapolis Colts running back Jordan Todman (28) returns a kick off 99 yards for a touchdown during the first quarter against the Green Bay Packers at Lambeau Field. Mark Hoffman/USA TODAY NETWORK-Wis
Fullscreen 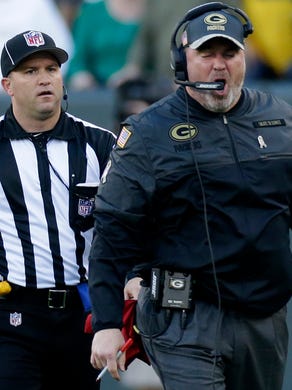 Green Bay Packers coach Mike McCarthy is upset over what he thought was a penalty during the first quarter against the Indianapolis Colts at Lambeau Field. Mark Hoffman/USA TODAY NETWORK-Wis
Fullscreen 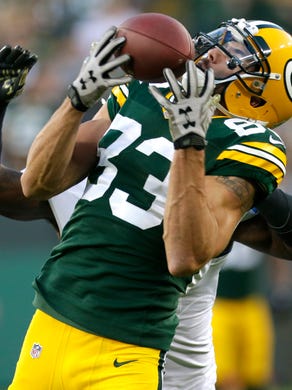 A squirrel runs on the field during the 2nd quarter of Green Bay Packers game against the Indianapolis Colts at Lambeau Field in Green Bay, Wis. on Sunday, November 6, 2016. Mark Hoffman/USA TODAY NETWORK-Wis
Fullscreen

Green Bay Packers' Aaron Rodgers is under pressure as he looks to pass in the first quarter against the Indianapolis Colts Sunday, November 6, 2016, at Lambeau Field in Green Bay, Wisconsin. Dan Powers/USA TODAY NETWORK-Wisconsin
Fullscreen

PACKERS07 PACKERS - Green Bay Packers tight end Richard Rodgers (82) is taken down after a catch and a first down during the 1st quarter of Green Bay Packers game against the Indianapolis Colts at Lambeau Field in Green Bay, Wis. on Sunday, November 6, 2016. Mike De Sisti/USA TODAY NETWORK-Wisconsin
Fullscreen

PACKERS07 PACKERS - Green Bay Packers tight end Richard Rodgers (82) is taken down after a catch and a first down during the 1st quarter of Green Bay Packers game against the Indianapolis Colts at Lambeau Field in Green Bay, Wis. on Sunday, November 6, 2016. Mike De Sisti/USA TODAY NETWORK-Wisconsin
Fullscreen 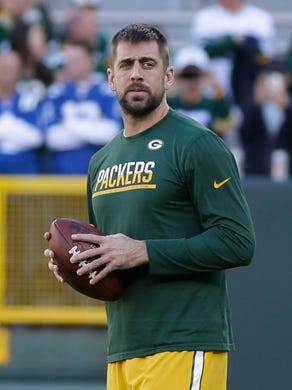 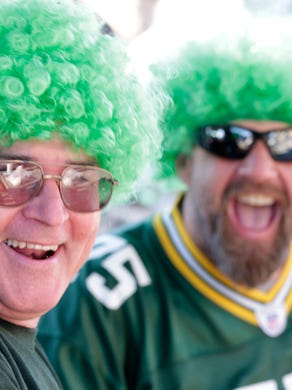 William Fox, 8, of Minnesota catches a football at a tailgate outside Lambeau Field prior to the Packers verses Colts game on Sunday, November 6, 2016, in Green Bay, Wis. Adam Wesley/USA TODAY NETWORK-Wisconsin
Fullscreen

Alexis Ocker of Minneapolis takes a drink at a tailgate outside Lambeau Field prior to the Packers verses Colts game on Sunday, November 6, 2016, in Green Bay, Wis. Adam Wesley/USA TODAY NETWORK-Wisconsin
Fullscreen 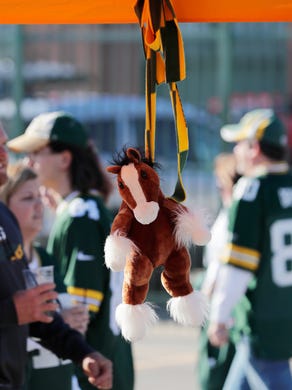 A stuffed horse is hung from a tent at a tailgate prior to the Packers verses Colts game outside Lambeau Field on Sunday, November 6, 2016, in Green Bay, Wis. Adam Wesley/USA TODAY NETWORK-Wisconsin
Fullscreen

RANT: What were Mike McCarthy and Aaron Rodgers thinking when they teamed up for this offensive performance? A week after breathing life into their offense with a short-passing attack, they looked like the 1970s Oakland Raiders. Time after time, Rodgers kept going for shots down the field. There were a couple times guys were open — Jeff Janis dropped a potential touchdown — but what’s the sense of going away from something that works? Did they think all of a sudden all of their offensive woes were gone because Ty Montgomery returned? They didn’t start moving the ball until late in the game when they started taking what the Colts gave them. Too late.

RANT: Why was tight end Richard Rodgers a big part of the Packers’ offensive game plan? McCarthy and his staff liked a matchup against rookie safety T.J. Green, but they shouldn’t count on Rodgers winning any matchups with safeties. He caught six passes for 64 yards, but he rarely gains yards after the catch, misses too many blocks in the run game and isn’t going to stress a team’s defense. The Packers are far better off going with five wide receivers and seeing what Geronimo Allison can do with the ball in the air.

RAVE: Remember the Dallas game when punter Jack Schum’s 47-yard punt down to the 2-yard line earned a rave (basically because there was nothing else to rave about)? Well, Schum did it again. The guy actually had a really good game, averaging 48.3 yards gross and 47.5 yards net on four punts. Two of those punts landed inside the 20-yard line.

RANT: Is there a reason Randall Cobb didn’t play more? You can understand limiting a guy’s plays because you don’t want to tax his hamstring, but if you’re going to wait until the second half when you’re falling behind, play him some in the first half so you don’t fall behind. It was a very strange way of using someone who McCarthy wasn’t expecting to play but then decided he should play. Maybe if he had played a little in the first half, he might have had more of an impact.

» Cornerback Demetri Goodson (concussion) was active and played special teams. He did not play on defense because Quinten Rollins returned from a groin injury.

» Receiver Davante Adams got some snaps in the backfield for a second straight week, but he wasn’t used nearly as much as he was against Atlanta.

» Players were slipping and sliding a lot on the Lambeau Field turf. That’s been a continual problem ever since the current surface was installed.

» Andre Rison and Travis Jervey, both members of the Super Bowl XXXI team, were the alumni captains.

RELATED: How they scored

REPLAY: The buzz on Packers-Colts