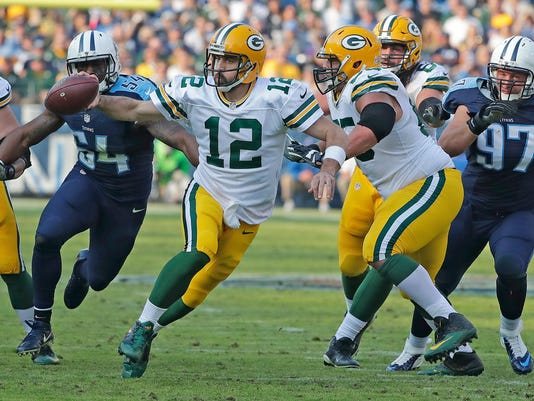 Asked what he’s seen on film from the two-time MVP, Norman chose to reflect on the positives. The Pro Bowl cornerback pulled his inspiration from J.R.R. Tolkien, who authored the "Lord of the Rings" and "The Hobbit."

“What do I see?” Norman shot back. “Hey, man, let’s not get things mistaken over there, man. That’s No. 12. That is pretty much Gandalf the White over there. That’s a wizard. That’s who he is, to me. Tom Brady is Gandalf the Grey, and he’s just an upper class of that.”

Told later about Norman's comments, Rodgers said, "I love it, man. He's one of my favorite characters, so I appreciate the comparison. Gandalf kind of fell into oblivion there and then he came back, he's 'the White' and he was a lot more powerful as 'the White,' so ... I don't really have any grey in the beard yet so I'll take any compliment from Josh like that, especially a 'Lord of the Rings' one.

"I mean, he didn't say Gimli (a dwarf warrior character) so I feel pretty good about that."

Rodgers’ traditional numbers aren’t MVP worthy, though they’re enough to make fantasy football enthusiasts happy. The Packers' quarterback ranks 14th in the NFL with 268 passing yards per game. He’s third with 22 touchdown passes, and his seven interceptions still are favorable compared to the rest of the league.

It’s almost enough to forget Rodgers ranks 29th in the NFL with a career-low 6.53 yards per pass attempt.

Of course, Brady is doing enough to put himself in the MVP conversation despite missing the season’s first four games because of the Deflategate suspension. The New England Patriots quarterback is averaging 327 passing yards per game, which ranks second in the league. Bolstered by his 12 touchdowns and only one interception, Brady’s 125.5 passer rating easily leads the NFL — a full 10 points higher than Atlanta Falcons quarterback Matt Ryan.

No matter, Norman put Rodgers and Brady in the same category. He called them the “crème of the crème” in the NFL.

“For me, that’s the best of the best, man,” Norman said. “I think a ‘wizard’ pretty much describes everything there is to know about the type of quarterback (Rodgers is), and those are the two I would really say that. That’s him and Tom Brady.”

As for Rodgers’ struggles this season?

“I don’t pay no attention to that,” Norman said. “That’s all people that are on the outside of the game and not an insider. That’s all people who like to point out the X’s and O’s but, at the end of the day, look at the overall thing. That guy can hit you at any time, any place, anywhere, any given day. Any given game.

“I really don’t care what the outside noise is. I know who we’re facing, and that’s a cerebral quarterback that’s the best of the best at what he’s doing. Regardless of what others may think of him, I know for a fact that that is the toughest quarterback challenge to face because he has everything in his toolbox, in his arsenal, to make them win.”