Welcome to your football Sunday Morning Buzz, rounding up news and views on the Packers. 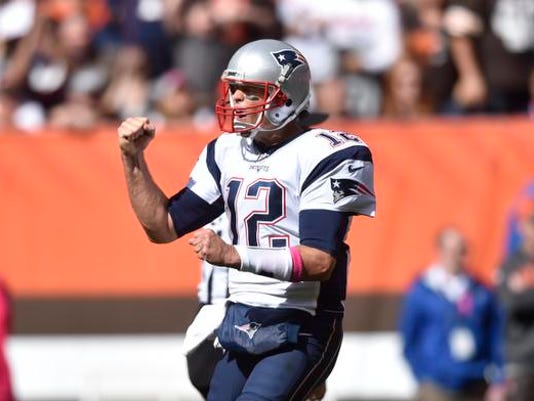 New England Patriots quarterback Tom Brady celebrates a touchdown in the first half of an NFL football game against the Cleveland Browns, Sunday, Oct. 9, 2016, in Cleveland.(Photo: David Richard, AP)

Welcome to your football Sunday Morning Buzz, rounding up news and views regarding the Green Bay Packers from around the web and here at PackersNews.com. Grab a cup of coffee (or brew some tea, if that’s your thing) and get caught up on everything you need to know about the Packers.

Pete Dougherty weighs in on the notion that the Packers are harmed by the lack of a traditional owner, and pretty much puts that idea to bed.

If you’ve been reading and hearing about what ails the Green Bay Packers, you’ve probably come across this one:

They don’t have a majority owner who can shake things up and put fear into everyone in the organization by walking into the building and firing someone on the football staff in midseason.

Anyone who believes that’s the Packers’ problem this season has a fundamental misunderstanding of the hierarchy and management structure that has made them the NFL’s second-winningest franchise since 1992. Their .631 winning percentage is behind only New England’s .650 in that time.

Andy Reid gave it his all for 14 seasons in Philadelphia, took a pink slip without recrimination from management and within five days was resurrecting his coaching career in Kansas City.

Unless the Green Bay Packers turn their season around in the next five weeks it’s possible that the eerie parallels between Mike McCarthy and Reid could extend to the Packers coach starting over in another NFL city next year.

Without a Packers game this Sunday, the entire NFL landscape is on offer when you sit down on your sofa this afternoon to watch some football. Get an idea of how Tom Brady's New England Patriots, the resurgent Dallas Cowboys and all the other teams in the league stack up with Tom Silverstein’s NFL column and his NFL power rankings.

Tom also has a notebook up, filled with a bunch of great Packers tidbits. It has a fantastic lead.

"The Packers were once a formidable primetime foe, but of late they have been far from creatures of the night." @TomSilverstein. pic.twitter.com/QvNJ4oj5CJ

The Packers drafted Jason Spriggs to be insurance at tackle. So, naturally, he will be playing at guard Monday night.

Rookie tackle Jason Spriggs isn't the guard #Packers deserve, but may be the one they need with T.J. Lang out. https://t.co/S94dfNOxZe

Be sure to check out this week’s 3 matchups video. Click through to the video below.

Three matchups to watch in Packers-Eagles

Here are our predictions for Monday night’s Packers game. Pretty even split this week:

WATCH: @greggrosenthal, @RapSheet examine if Mike McCarthy is on the hot seat after Packers' 4-6 start https://t.co/52iexqzawzpic.twitter.com/Daa4nwgRho

Bryan Bulaga will have his work cut out for him Monday night.

Brandon Graham's 59 QB pressures this season leads the NFL. Can Bryan Bulaga slow him down? #GBvsPHIpic.twitter.com/gVuHIF26lj

Rodgers’ numbers haven’t equated to victories over the last month:

The Packers are 1-4 over the past five weeks.

Even though Aaron Rodgers has been absolutely on 🔥 pic.twitter.com/ewtMmz6Evj

The Eagles will be in their all-black uniforms Monday night:

Eagles will be wearing their black uniforms for their upcoming MNF game against the Packers#FlyEaglesFlypic.twitter.com/yDlKAosOCM

Doug Pederson is under some heavy scrutiny when it comes to how he deals with struggling wide receiver Nelson Agholor:

Could former Packer Allen Barbre be the key to Monday’s game:

Don't judge this column by its headline. Why Allen Barbre is a key in Monday's game, from @MikeSielski: https://t.co/HCaOWGRZxa

If you are attending the game, be aware that Eagles fans have a certain reputation:

No matter what happens Monday night, the Detroit Lions are in first place in the NFC North.

Lions alone in first with last-second win over Vikingshttps://t.co/49HjkZYn9Jpic.twitter.com/Mjfc1zTJi1