Packers were pleased with how cornerback Damarious Randall returned from groin surgery. 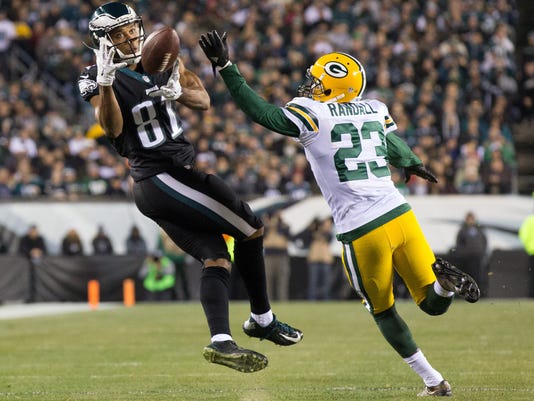 GREEN BAY - For his first game in five weeks, the Green Bay Packers were pleased with how cornerback Damarious Randall returned from groin surgery.

Randall had an uneven game Monday at Philadelphia. He showed rust with multiple missed tackles, including a whiff against Eagles quarterback Carson Wentz on third down, allowing a field goal before the end of the first half.

But Randall also provided a boost to the Packers depleted secondary. He had a third-down pass breakup in the fourth quarter.

The Packers' defense played its best game in more than a month, holding the Eagles to 13 points on their home field. They were no doubt aided playing an Eagles roster devoid of playmakers, but Wentz provides a challenge.

The rookie quarterback finished 24-of-36 passing for 254 yards, no touchdowns and an interception.

“Damarious did a lot of good things,” coach Mike McCarthy said. “I think obviously he plays a very challenging position. Coming back from his injury, definitely it was taxing for him. I thought he played a really good, solid game, and definitely his presence and having him back out there made a big difference.”

Randall had groin surgery last month. He had not played a game since Oct. 16 against the Dallas Cowboys.

The former first-round pick finished with a team-high seven tackles against the Eagles.