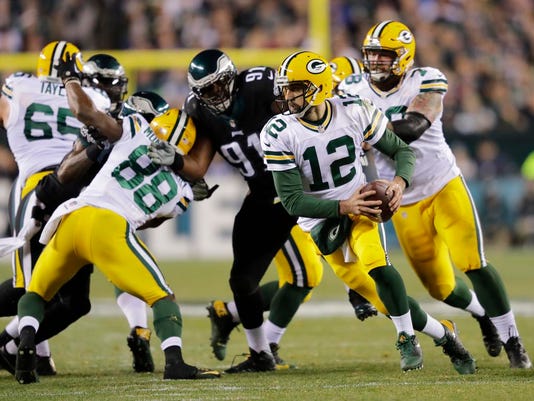 PHILADELPHIA - Green Bay Packers quarterback Aaron Rodgers didn't have to scramble around the pocket a whole lot Monday night, but one of the times he faced some pressure, he injured his hamstring.

Rodgers went to the bench area and backup Brett Hundley started warming up.

"As I was extending the play – I was a little tight in the first half for some reason; I don’t know if it was sitting around the last two weeks (because) of these night games, when you do a lot of resting," Rodgers said of the injury. "I’ll be good to go, though."

When he got to the sideline, Rodgers started stretching out his left leg. After a while, the medical staff decided to tape him up so he could return to the game and avoid too much strain on it.

Getting the tape on, however, would have caused him to pull his pants down in public. So Rodgers ducked into a tent that the team has along the sideline, which sometimes is used if a player has to relive himself in the middle of the game.

"I just didn’t want to be getting taped up on the television," Rodgers said. "But obviously when I walked out and saw the camera right in my face, I knew there was probably some sort of mini-story growing. I had to drop my drawers a little bit to get taped up and just wanted to do in the privacy of that tent."

Rodgers insisted the injury wasn't a problem, but he was seen limping from time to time and did less scrambling after that. In some ways, it forced him to stay in the pocket and wait for receivers to get open.

It turned out the injury didn't affect him that much.

Rodgers, who said this week that he thought the Packers could "run the table," said it was important that the team not feel relief over the 27-13 victory over the Eagles.

"It’s been a rough four weeks," he said. "We haven’t played a complete game yet maybe this season, so this was a great effort in all three phases for us. Offensively, controlling the ball and third downs. Defensively, getting a turnover and holding them in the second half. And then special teams, not giving up any big plays, Jake had one punt that got downed at the 1-yard line, Mason (Crosby) made his kicks, so that was big for us.

"You’ve got to give the defense a lot of credit and the big fellas up front." 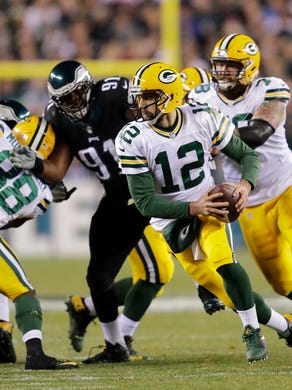 Green Bay Packers receiver Davante Adams takes a moment alone prior to the start of the game against the Philadelphia Eagles at Lincoln Financial Field. Dan Powers/USA TODAY NETWORK-Wis
Fullscreen 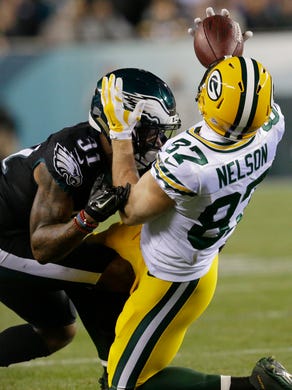 Green Bay Packers linebacker Jay Elliott (91) downs a point inside the one yard line during the second quarter of their game against the Philadelphia Eagles Monday, November 28, 2016 at Lincoln Financial Field in Philadelphia, Penn. Mark Hoffman/Milwaukee Journal Sentinel
Fullscreen