Insider: Thumbs up to Nelson, down to run 'D'

A capsule recap of the highs and lows from Sunday's game.

Insider: Thumbs up to Nelson, down to run 'D'

Green Bay's Aaron Rodgers acknowledges the fans as they cheer for him exiting the field after a victory over the Texans. Dan Powers/USA TODAY NETWORK-Wisconsin
Fullscreen

Green Bay's Letroy Guion is pumped up as he leaves the field following a victory. Dan Powers/USA TODAY NETWORK-Wisconsin
Fullscreen

Green Bay Packers quarterback Aaron Rodgers (12) communicates to the offense before the snap in the fourth quarter as the Green Bay Packers host the Houston Texans on Sunday, December 4, 2016, at Lambeau Field in Green Bay, Wis. The Packers defeated the Texans 21-13. Adam Wesley/USA TODAY NETWORK-Wis
Fullscreen 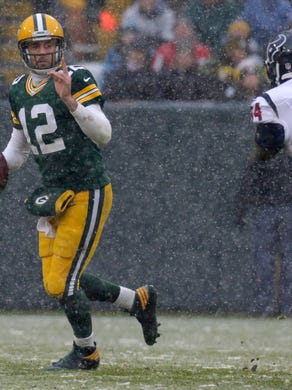 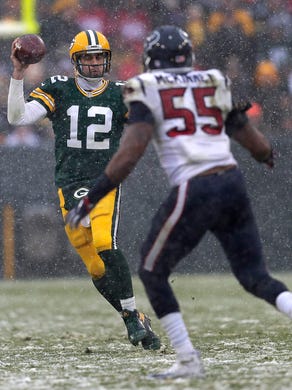 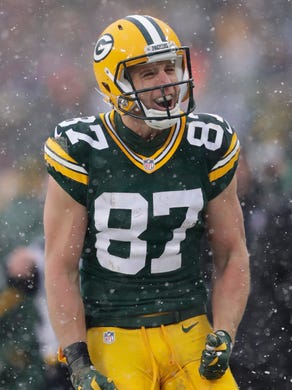 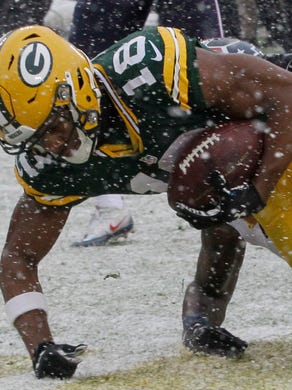 Skylar, 8, Blecke of Charlevoix, MI, throws a snowball to his dad Scott Blecke as the two enjoy a game of catch prior to the start of the game. The Green Bay Packers host the Houston Texans Monday, December 5, 2016, at Lambeau Field in Green Bay, Wis. Dan Powers/USA TODAY NETWORK-Wis.
Fullscreen

Luis Alanis of Chicago begins to get covered in snow as he waits for the start of the game. The Green Bay Packers host the Houston Texans Monday, December 5, 2016, at Lambeau Field in Green Bay, Wis. Dan Powers/USA TODAY NETWORK-Wis.
Fullscreen

Grounds crew members begin to remove the tarp covering the field prior to the start of the game. The Green Bay Packers host the Houston Texans Monday, December 5, 2016, at Lambeau Field in Green Bay, Wis. Dan Powers/USA TODAY NETWORK-Wis.
Fullscreen

Workers roll up tarps that had been covering the field before the Green Bay Packers game against the Houston Texans Sunday, December 4, 2016 at Lambeau Field in Green Bay, Wis. Mark Hoffman/Milwaukee Journal Sentinel
Fullscreen

Workers roll up tarps that had been covering the field before the Green Bay Packers game against the Houston Texans Sunday, December 4, 2016 at Lambeau Field in Green Bay, Wis. Mark Hoffman/Milwaukee Journal Sentinel
Fullscreen

The Packers survive for another week. With Detroit (8-4) winning in New Orleans, the Packers would have dropped three games down with four to go if they would have lost to the Texans. But at 6-6, the first time they’ve been at .500 or better since Week 10, they’re still in striking distance of the Lions. The Packers have Seattle, at Chicago, Minnesota and at Detroit. The Lions have Chicago, at New York Giants, at Dallas and Green Bay. If the Packers win out, they would still need Detroit to lose once more this season. In the short term, they won a gritty game in which the offense looked like it was stuck in the snow. But as was the case last week against Philadelphia, the offense dialed up a clutch fourth-quarter drive that clinched the game. In this case, it went 89 yards in eight plays in 4 minutes, 41 seconds and put the Packers up, 21-7. The defense surrendered a late touchdown, but Houston wasn’t able to use the remaining 1:51 to produce a game-tying drive and the Packers walked away 21-13 victors. Quarterback Aaron Rodgers completed 20 of 30 passes for 209 yards and receiver Jordy Nelson caught 8 passes for 118 yards and a touchdown.

DOUGHERTY: All must-wins for Packers

INSIDER: Thumbs up to Jordy Nelson

POLL: Will Packers make the playoffs?

Coach Mike McCarthy was feeling a little bit better about his offense despite a slow start to the third quarter and so with the Packers facing a fourth-and-2 at the Houston 48, he decided to go for it. Whether it was a gutsy call or a stupid one is up for debate, but it looked bad when fullback Aaron Ripkowski gained only a yard on a run up the middle. It could have been all the Texans needed to get this game going in their favor. But it never happened. On second-and-5 at the Packers 36, Texans quarterback Brock Osweiler fired a pass across the middle to go-to receiver DeAndre Hopkins for what would have been a sure first down and probably a lot more. Hopkins dropped it. Houston had another shot to get a first down, but on third-and-5, Osweiler felt some heat around the edges from linebackers Clay Matthews and Jayrone Elliott and threw to Hopkins deep in double coverage. The ball sailed way over his head and the Texans were forced to punt. McCarthy was bailed out and on the subsequent possession the offense went 98 yards in 12 plays for a touchdown that made it 14-7.

For most of this season, Nelson had put up solid numbers, 61 catches for 754 yards and nine touchdowns. He had made his share of clutch catches, but more often than not, he’d made fairly pedestrian catches and not stretched the field. On Sunday, that changed. Nelson wasn’t blowing by people, but with Davante Adams receiving a lot of the attention from Houston’s defense, the veteran made three clutch catches that helped win the game. First, he outmaneuvered cornerback Charles James’ leveraging, causing James to slip and fall, and caught a 32-yard touchdown pass with 12:50 left in the game. Then, on the next series, Nelson caught a laser down the sideline before being drilled by safety Corey Moore on the sideline. Finally, he leaped over cornerback Kareem Jackson on a deep corner and hauled in a 28-yard completion to convert a third- and-6 and set up Ripkowski’s 3-yard touchdown run one play later.

The Packers’ run defense has fallen apart. Even with Texans back Lamar Miller in and out of the game due to injury, the Houston gained 123 yards on 27 carries, a 4.6 average. Miller carried 14 times for just 22 yards, but backups Alfred Blue and Johnathan Grimes just pounded the defense. Each carried five times with Grimes gaining 43 yards and Blue 38. Osweiler added three carries for 20 more yards. The Texans converted just six of 15 third downs, but they kept converting long third downs with run plays against the Packers’ dime defense. Eight of their 17 first downs were on the ground. It was the third time in four games the Packers have given up 120 or more yards on the ground after going seven of the previous eight without giving up 100.

RAVE: Defensive coordinator Dom Capers has had to force a lot of rookies into action this season, but one guy he was able to bring along slowly was defensive end Dean Lowry. The rookie from Northwestern had played about 8 percent of the defensive snaps coming into the game, but he made quite an impact with a sack, a tackle for loss and a pass batted down. Given Mike Daniels did not make the stat sheet, Lowry was the most productive guy on the defensive line.

RAVE: If Ty Montgomery hasn’t proved he’s the best option at running back then the coaches need to watch some more film. Montgomery carried six times for 40 yards and seemed to be the only one who could keep his feet and throw his body into defenders. He also caught two passes for 16 yards. James Starks and Christine Michael combined for 20 yards on 13 carries, a 1.54-yard average. What more needs to be said?

RAVE: Give Rodgers credit for playing smartly through a hamstring injury. Instead of trying to do more than he was physically able, he managed the game well, completing 20 of 30 passes for 209 yards and two touchdowns (108.9 passer rating). He missed some throws, but he still managed 16 scramble yards on three carries and bought himself enough time to make the critical touchdown throw to Nelson. He took some hard hits but dusted himself off and didn’t flinch.

RANT: There was no way Matthews should have been in the game. His left shoulder injury was clearly bothering him. He played inside to start the game and then after he wasn’t effective moved into a part-time role rushing from the outside. By the end of the game, he was rushing without using his left arm. It wasn’t worth the potential for worsening the injury in exchange for not a single stat on the final stat sheet. He should have been inactive.

» Safety Morgan Burnett played a decent amount of inside linebacker after Matthews went to the bench and was used primarily as a third-down rusher. Jake Ryan re-injured his ankle but came back and saved the position from being a mess.

» The field was very slick and those who didn’t choose long cleats suffered. On one play, guard Lane Taylor looked like he was on skates as he fought off a bull rush, sliding backward about 8 feet.

» Linebacker Jayrone Elliott was back on the field after being inactive the week prior for no apparent reason. He responded with a very nice special teams tackle and a couple decent rushes.

» Linebacker Nick Perry injured his hand in the first half and then tried to play with a club on it in the second.

» Wide receiver Trevor Davis was inactive for the first time since Week 1 when he was still recovering from a shoulder injury.