With wind chills down near single digits, the Green Bay Packers held their most rigorous practice of the week. 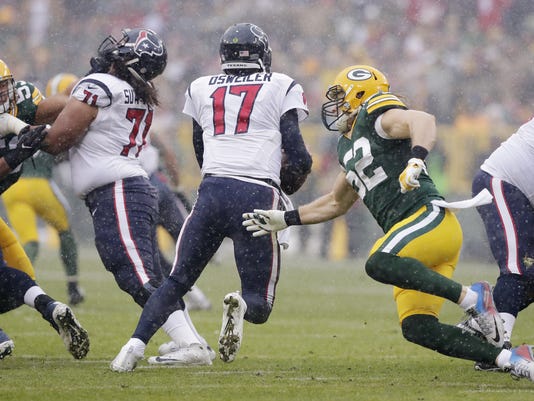 GREEN BAY - With wind chills down near single digits, the Green Bay Packers held their most rigorous practice of the week, a session coach Mike McCarthy described as pivotal for the cadre of injured players on the roster.

McCarthy said Wednesday that linebacker Clay Matthews would not do anything until Saturday, the team's final practice of the week, and Matthews would focus instead on building strength in his shoulder. But Matthews was on the practice field Thursday in a limited role, and that might be an indication that he is ahead of schedule for Sunday's game against the Seattle Seahawks.

Also on the field was right guard T.J. Lang, who on Wednesday told reporters he did in fact break his left foot in the loss to the Tennessee Titans earlier this year. Lang did not take any team reps during the portion of practice open to the media but went through some individual drills. He had a heavy tape job on his left foot but moved a bit better than expected.

Still, Lang remains a long shot for Sunday. Rookie Jason Spriggs is likely to fill in if Lang is unable to play.

"T.J.’s a big advocate in the classroom, particularly offensive line room," McCarthy said. "He’s made some individual tapes and cut-ups of things that he sees and specifics to help not only Jason because his goal, just quoting T.J., he wants to make sure that that right guard position is successful. That tells you the type of teammate he is, the type of man he is and the importance of winning. I think T.J. has been a tremendous veteran influence over Jason during that stretch."

Martinez appeared to tweak his injured left knee during a tackling drill and did not participate in the next few periods open to the media.

"He did a bunch yesterday," McCarthy said. "This is a big day. This is our padded work. This is our longest practice. We’ll be out there over two hours. We’ll go indoors and outdoors."

Randall, who had groin surgery earlier this year, did almost nothing while reporters were present. He took one or two team reps and then sat off to the side, skipping individual work and position drills altogether. It was not a positive sign for the second-year corner.