Packers NT Christian Ringo is getting a lot of attention for his peculiar pass rush Sunday. 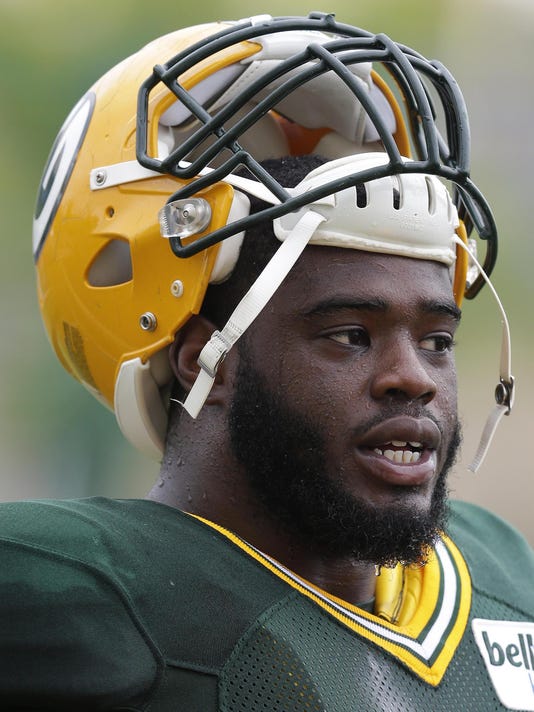 GREEN BAY - It’s not a play Green Bay Packers nose tackle Christian Ringo intends to duplicate, but he’s getting a lot of attention for his sideline-to-quarterback pass rush during the 38-10 victory over Seattle on Sunday at Lambeau Field.

Ringo got confused about whether he should be out on the field and came to the sideline. But as he arrived, coaches started yelling at him to get back on the field, which is exactly what he did.

Only the ball was snapped while he was running to the line of scrimmage so he just kept going, running full speed into Seahawks guard Mark Glowinski and blowing him back almost into quarterback Russell Wilson's lap.

“We only had 10 people and everybody’s yelling, so he got a running start on that guard,” defensive coordinator Dom Capers said with a smile. “He probably would like to rush like that all the time. He might come in and request that, where he can get that 20-yard start to run at the guard because he knocked him back into the quarterback, I’ll say that.

“We might have to try to put that in.”

Ringo said he got plenty of teasing in the meeting room Monday as the defense watched tape of its performance. But he took it all in good fun and said he just reacted to the situation the best he could.

“I ran on the field late and I was just thinking, ‘Just keep running. Just stay onsides, make sure I’m onsides.’ I had my momentum going, so I said, ‘Why not go with the pile?’”

Cook left the game late in the first half and returned to the sideline after the second half began. He was not allowed to return, but appeared to be fine after the game and in the locker room Monday.

NFL Network reported that Cook suffered a lung contusion and was held out for precautionary reasons. The Packers return to practice Wednesday and more about his status will be known then. Cook missed six games early this season with a high-ankle sprain.

With Clay’s health situation, we were going to try to limit him to try to get him through the game to where he didn’t have any setbacks," Capers said. “And I think that was the case so, hopefully, he’ll continue to be healthier this week.”

Cornered market: The Packers haven’t had stability in their secondary since Week 1 when Sam Shields was healthy.

But they are getting closer to having it now that 2015 first-round pick Damarious Randall and fellow second-year pro Quinten Rollins are healthy and playing more. Because he felt more confident in those two and starter LaDarius Gunter, he was able to play safety Morgan Burnett at a linebacker position known as the “Whip.”

“D’s just kind of working his way back in,” Capers said. “You saw him make two very nice plays. I thought Quinten played one of his best games. He was playing inside. You know, we’ve had to use him outside just out of necessity, but hopefully we can keep those guys moving forward because I thought both of them played well last night.”

No flex: The Packers-Vikings game Dec. 24 at Lambeau Field will remain a noon kickoff.

The NFL had the option of flexing one of the noon games to a 3:25 p.m. start and chose Tampa Bay at New Orleans.

It's still possible the Packers' season finale against Detroit could be moved to a night game, but the NFL doesn't make that decision until six days before the final Sunday of the regular season.