Ty Montgomery runs for a first down in the third quarter. Dan Powers/USA TODAY NETWORK-Wisconsin
Fullscreen 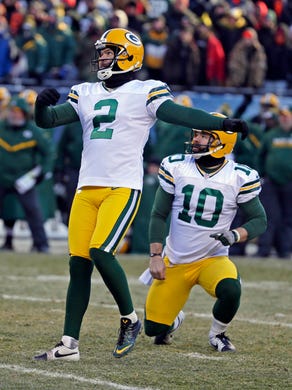 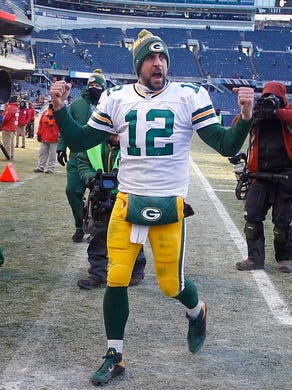 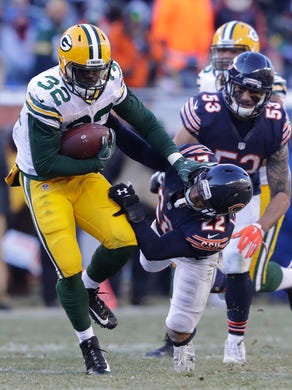 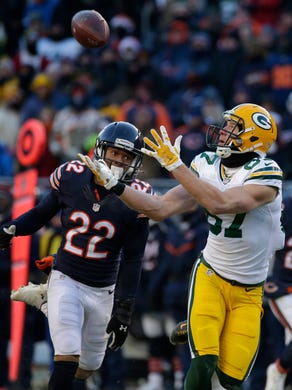 Green Bay Packers' Aaron Rodgers reacts after an incomplete pass in the end zone near the end of the first half. The Green Bay Packers play against the Chicago Bears Sunday, December 18, 2016, at Soldier Field in Chicago, IL. Dan Powers/USA TODAY NETWORK-Wis.
Fullscreen 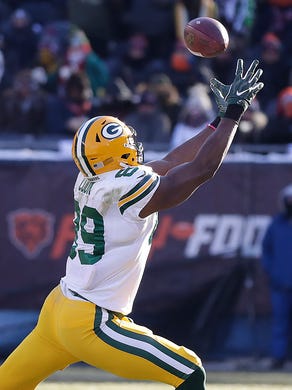 A warmly dressed Brock Elmore of St. Louis opens up his Packers flag in the 8 degree cold before the game against the Chicago Bears at Soldier Field Sunday, December 18, 2016. Jim Matthews/USA TODAY NETWORK-Wis
Fullscreen 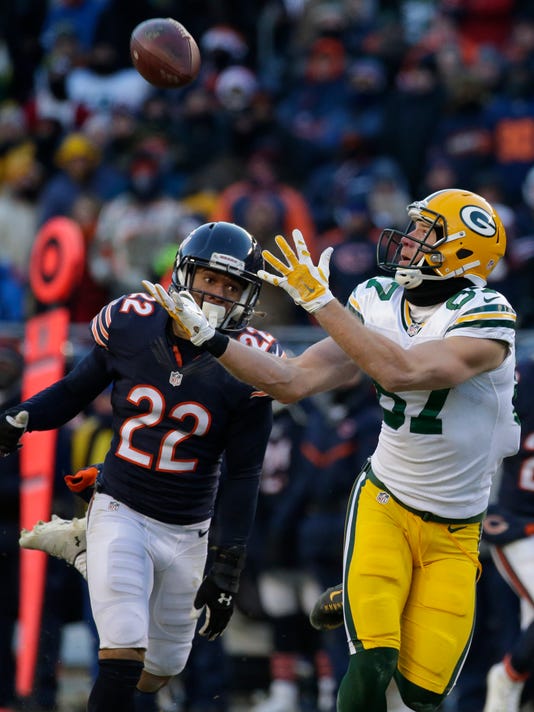 CHICAGO - There were elements of symmetry between Jordy Nelson's 60-yard reception against the Chicago Bears on Sunday and Richard Rodgers' 61-yard Hail Mary grab against the Detroit Lions last year.

With four straight wins, the 2016 Packers are in the thick of the NFC North race after knocking off the Bears, 30-27. A year ago, Rodgers' astonishing catch ignited a three-game winning streak that pushed the 2015 Packers toward the wild-card berth they later received.

And as expected, every player will remember where they were standing and what they saw as quarterback Aaron Rodgers heaved a tremendous pass toward Nelson, his favorite receiver, two-thirds of the way downfield on third and 11 from their own 26 with 31 seconds left. A 32-yard kick by Mason Crosby finished off the win.

D'AMATO: An interloper in a Bears den

INSIDER: Thumbs up to Montgomery

Wide receiver Ty Montgomery: "That last play from Aaron to Jordy, I’m just standing there watching it like, ‘Go get it, Jordy!’ And he came down with it and was awesome. Mason finished it off with the kick."

Right tackle Bryan Bulaga: "I was able to see it. They ran a little stunt on me and Spriggs on that side. We didn’t really pass it off but Spriggs bounced behind me, and I was able to see Aaron throw it. Then I was able to track it through the air and saw him come down with it. It was a pretty good feeling, I can tell you that much."

Center Corey Linsley: "They dropped a guy so we kind of had a couple guys free. I looked up and I saw Aaron throw that and I just saw Jordy running. I was like, ‘There’s no way he’s dropping this ball,’ you know what I mean? That was awesome. That was sick."

Safety Morgan Burnett:  "When I seen A-Rod launch it up, as soon as I seen him launch it I just looked downfield quick and I seen Jordy running with his head up. I was like, ‘Uh oh, he got him! He got him!’ Then we just erupted once he caught it, man. He’s been doing that since I’ve been here, and it’s just a lot of fun to see them two connect like that."

Defensive back Micah Hyde: "It’s a third-and-long (play), and those guys do that all the time. You just see 12 load up, throw it and there was so much air on the ball that I saw Jordy running, look up and run some more and look up. It was like he was trying to gain speed to catch up to it, and he did. I honestly didn’t see him catch it because people were jumping up in front of me. That was just an awesome play by them."

Bears cornerback Tracy Porter: "I kind of had a feeling that they didn't want to go to overtime. They were trying to win the game. So they were going to try and take a shot at some point. ... I kind of told the guys to keep their antennas up. I said that even though this is a tied game and under a minute left, I felt like he wasn't looking to go into overtime. He was looking to win the game and go home. So we had to have our awareness up and I tried to relay that to as many guys as I could. ... It was just Aaron Rodgers buying time and a good throw and good catch. (Jordy Nelson) was able to run a post and run away from the corner and Cre'Von (LeBlanc) was in good position on being on top of the receiver in the coverage we were playing. He was doing what he was supposed to be doing. It's just that he had an entire field (to cover) and Aaron was able to throw the ball away from him and Jordy made an adjustment on the ball."

RELATED: Packers get it done on ground