Aaron Rodgers, Jordy Nelson and the five old reliables up front have the Packers’ offense just where it needs to be. 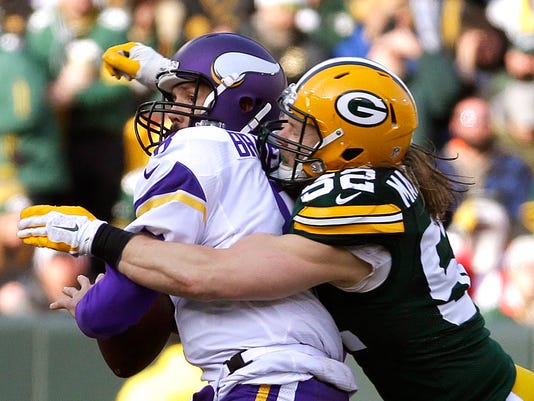 GREEN BAY – Aaron Rodgers, Jordy Nelson and the five old reliables up front have the Green Bay Packers’ offense just where it needs to be entering the money month of January.

Now it’s about dressing up what has been a mediocre defense all season, and that’s where Clay Matthews comes in.

Matthews played his finest game in a long time Saturday afternoon as the Packers dispatched the Minnesota Vikings, 38-25, at balmy Lambeau Field.

“He was feeling a little better today and he made plays. That’s what we need. He’s a difference-maker.”

Working through what has been described as a separated left shoulder, Matthews forced the first fumble of his least productive season in an eight-year career with a strip-sack late in the first half that set up a touchdown.

INSIDER: Thumbs up to Rodgers

He also batted down two passes, knocked down Sam Bradford two other times and drew a holding penalty.

That’s six important plays for a defense that simply isn’t good enough rushing the passer without Matthews in his old form.

“He’s a dynamic guy,” veteran guard Joe Berger of the Vikings said. “Obviously, a big part of their defense. When you’re trying to protect the quarterback you know where he is. I’m sure they’d love to be able to use him any way they can.”

The 113th Packers-Vikings game was all Green Bay and totally unlike the mid-September meeting. That was a defensive struggle, and coach Mike Zimmer’s defense got the best of coach Mike McCarthy’s offense for a 17-14 victory.

This time, Zimmer stayed with his four-man rush too long and got shredded. After the Packers’ first 15 snaps (13 passes, two runs), the Vikings had given up 167 yards and two touchdowns.

The Vikings (7-8) moved within one score, 21-13, late in the first half before the Packers went on another roll and extended their lead to 25 points before allowing two touchdowns in garbage time.

Stretching its winning streak to five games, Green Bay (9-6) will meet the Detroit Lions (9-5) next Sunday at Ford Field to decide the NFC North Division title. The Packers also enhanced their wild-card chances but can’t clinch an eighth straight playoff berth until next weekend.

“We’re planning on going to Detroit to win the division,” McCarthy said. “This is a very committed football team. I’ve been standing up here saying it since training camp.”

McCarthy improved to 16-6-1 against the Packers’ border rival (9-2-1 in Green Bay) and 4-2 against Zimmer, the third-year coach who beat the Packers on the same field a year ago to win the NFC North.

“They beat us in most every phase,” said Zimmer. “I think we played hard; I just don’t think we played good. We are not resilient enough. I need to do a better job. I haven’t done a good enough job this year.”

RELATED: Nelson turning back clock to 2014

After a 5-0 start despite the loss of quarterback Teddy Bridgewater the Vikings have lost eight of their last 10 games. Adding insult to injury, their schedule Friday when up in smoke after their team charter slid off the runway taxiing at Appleton International Airport and it took four hours before players, two at a time, could start being fork-lifted off the aircraft.

“It sucked,” guard Alex Boone said. “I think that did about summarize how the season has gone so far.”

Rodgers opened 10 for 10, and it was almost as if the Vikings didn’t know what hit them. Frustrated no end in the Game 2 meeting, he cut apart one of the NFL’s best pass rushes and better collection of cornerbacks.

“From the first throw today I was in a different head space,” said Rodgers, whose passer rating of 136.6 almost doubled his 70.7 of Sept. 18. “For whatever reason, I had a heightened awareness and focus. I was seeing things better. I was playing slower in my mind from the start.”

Nelson, his partner in crime, had a phenomenal first half in which he caught seven passes for 145 yards. Just one of his catches appeared to come against Xavier Rhodes, the Vikings’ best cover guy who has battled Nelson chest-to-chest in the past.

Rhodes was supposed to stick with Nelson throughout the game, acccording to the Minneapolis Star Tribune,  But afterward it was revealed that members of the Vikings secondary went against Zimmer's wishes and switched off on the coverage responsibilities, depending on who was on that side of the field.

It was as illogical as Zimmer's decision not to blitz until later on in the second quarter when the game was almost out of hand.

The Vikings ended up sacking Rodgers four times and knocking him down after another six throws. Zimmer has an exceptional and novel blitz/stunt package but hesitated and then all was lost.

“When you play a guy like this he’ll come ready to play each and every week,” defensive end Everson Griffen said. “He’ll have his boys ready. There’s no margin for error with this kind of quarterback.

“In the first 15 plays they only ran the ball twice. They made everything look like run. Play-action. Then they started dinking and dunking, getting the ball out quick, and we weren’t disciplined.”

The surprise was the efficiency of the Vikings’ offense. “We were able to move the ball on them,” Berger said.

Averaging an NFL-worst 2.98 per carry, the Vikings gained 4.7 per rush in picking up 93 yards on the ground, their highest total since Game 6.

In the air, Bradford threw for a season-high 382 yards as Minnesota piled up another season-high with 446 yards.

The key, of course, was the ability of the Packers’ defense to take the ball away twice and force the Vikings to kick field goals early. Matthews was the central figure in all of it.

After Bradford missed an open Adam Thielen in the back of the end zone on second down from the 4, Matthews batted down a bubble screen and Zimmer had to wave in kicker Kai Forbath.

POLL: If the Packers make the playoffs, can they win the Super Bowl with this pass defense?

On their next possession, the Vikings moved to the 8 before Matthews knocked down Bradford on successive passes and the field-goal team came on again.

One series later, backup center Nick Easton said he rolled a wet ball back that never got to Bradford and was recovered by nose tackle Kenny Clark. Three plays later, the Packers scored their third touchdown.

When Minnesota reached the Green Bay 41 late in the first half, Matthews whipped around left tackle T.J. Clemmings, smashed Bradford from behind and his fumble was recovered by Mike Daniels.

That set up another touchdown and gave Green Bay a 28-13 halftime lead.

The Packers’ turnover differential of plus-2 Saturday increased their margin to plus-13 during their five-game winning streak. At the same time, the Packers have given the ball away once in the last five games.

“The turnovers, to me, were the key in the game,” said McCarthy. “I think our defense gave us great field position and gave us the ability to get the point total up to 38.”

When the blitzing began to make things difficult for Green Bay’s offense, Matthews made sure the Vikings didn’t come back.

On their first possession of the third quarter, Matthews backed off a rush sensing a screen behind him to Thielen and deflected the third-down pass.

The Vikings put together a drive on their next series but Matthews drew a holding penalty on Clemmings with a speed rush. It wiped out a third-and-6 completion of 12 yards to Matt Asiata and forced another punt.

“He looked like Clay Matthews to me, Pro Bowler that he is,” said linebacker Joe Thomas. “He didn’t get in this year, but he’s a great player and he stood out today.”

Despite the rejuvenated Matthews, he wasn’t enough to prevent Thielen from catching 12 of 15 targeted passes for a career-high 202 yards and two touchdowns against a leaky secondary. Stefon Diggs, who owned the Packers in the first game, settled for four for 29.

SUMMARY: How they scored

“He (Thielen) is a guy that came in, worked his way up the ranks and you see the benefits of it,” cornerback Quinten Rollins said. “He can be that security blanket. That’s what he is for No. 8 (Bradford)."

Good teams dominate turnover differential, play well on special teams, move the ball, excel in the red zone and have at least one explosive pass rusher who can put the fear of God into opposing offenses.

Buoyed by Matthews’ return to form, the Packers on Christmas Eve looked to be a team headed in the right direction at the right time. 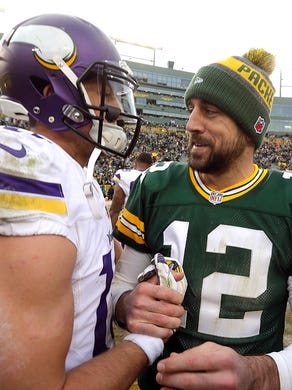 Packers fans celebrate a touchdown in the first quarter of a Dec. 24, 2016, game against the Vikings. Milwaukee Journal Sentinel
Fullscreen 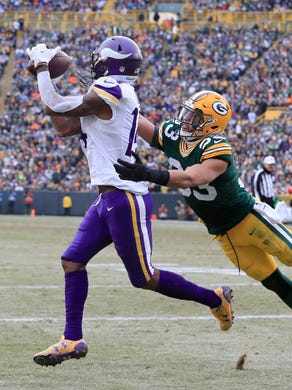 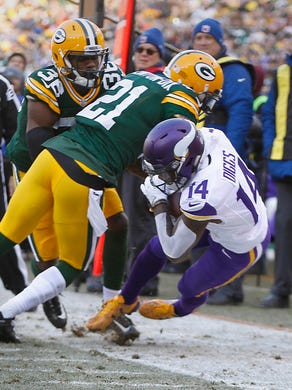 Geronimo Allison signals for a first down after a reception. Dan Powers/USA TODAY NETWORK-Wisconsin
Fullscreen 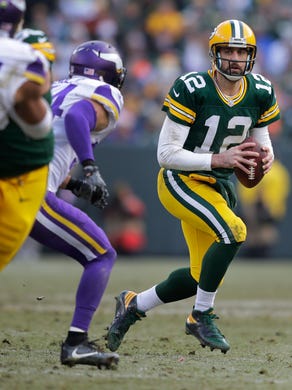 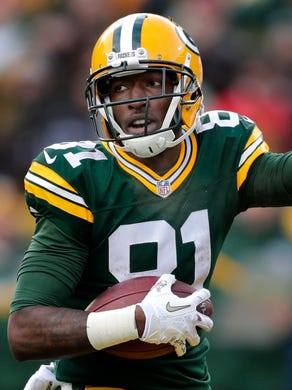 Green Bay Packers receiver Geronimo Allison reacts after a reception for a first down against the Minnesota Vikings at Lambeau Field. Wm. Glasheen/USA TODAY NETWORK-Wis
Fullscreen 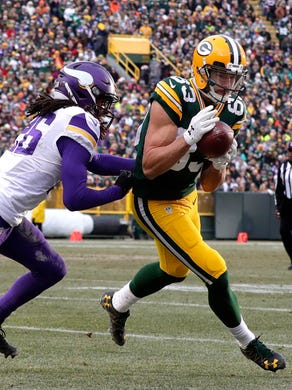 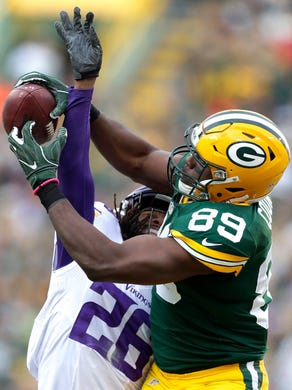 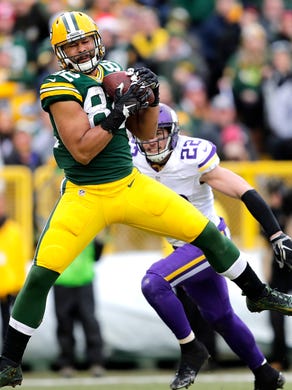 Green Bay Packers' Aaron Rodgers is all smiles in the end zone after running for a touchdown in the second quarter. The Green Bay Packers host the Minnesota Vikings Saturday, December 24, at Lambeau Field in Green Bay, Wis. Dan Powers/USA TODAY NETWORK-Wis.
Fullscreen

Green Bay Packers wide receiver Geronimo Allison (81) runs after a catch in the second quarter against the Minnesota Vikings as the Packers host the Vikings at Lambeau Field on Saturday, December 24, 2016, in Green Bay, Wis. Adam Wesley/USA TODAY NETWORK-Wis
Fullscreen 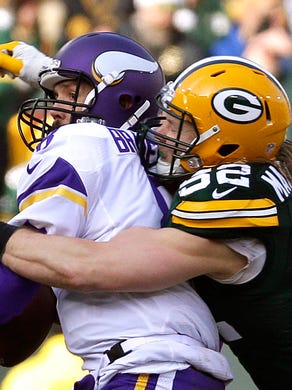 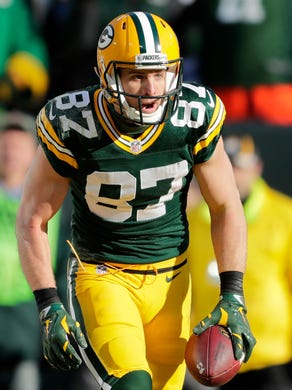 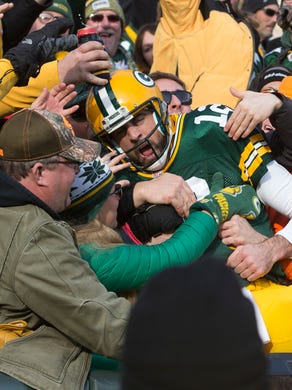 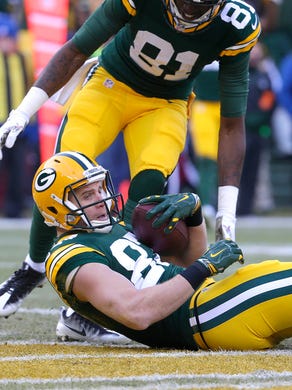 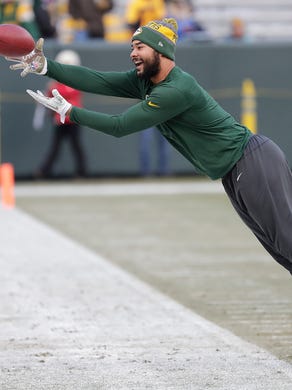 A Packers fan with a festive cheesehead walks past some Vikings fans outside the stadium before the Packers host the Vikings at Lambeau Field on Saturday, December 24, 2016, in Green Bay, Wis. Adam Wesley/USA TODAY NETWORK-Wisconsin
Fullscreen

Haley Hodek, 14, of Neenah puts the hat on a snowman dressed as Jordy Nelson outside the stadium before the Packers host the Vikings at Lambeau Field on Saturday, December 24, 2016, in Green Bay, Wis. Adam Wesley/USA TODAY NETWORK-Wisconsin
Fullscreen

Dan Christopher, left, and his wife Heather tailgate dressed as string cheese with their friends Deb and John Sherman, right, prior to the start of the game against the Minnesota Vikings. The group is from Shullsburg, Wis. The Green Bay Packers host the Minnesota Vikings Saturday, December 24, at Lambeau Field in Green Bay, Wis. Dan Powers/USA TODAY NETWORK-Wisconsin
Fullscreen

Dave McManus grills brats under the eye of his daughter, Allison, before the Green Bay Packers games against the Minnesota Vikings Saturday, December 24, 2016 at Lambeau Field in Green Bay, Wis. The were celebrating the birthday of his wife and her mother. They are from Germantown. Mark Hoffman/Milwaukee Journal Sentinel
Fullscreen

Ken Wochus, dressed an legendary coach Vince Lombardi, shows his technique of getting a ticket if needs one before the Green Bay Packers games against the Minnesota Vikings Saturday, December 24, 2016 at Lambeau Field in Green Bay, Wis. Mark Hoffman/Milwaukee Journal Sentinel
Fullscreen