Tom Silverstein and Ryan Wood discuss the status of receiver Randall Cobb's sprained ankle and the Green Bay Packers' preparions for Sunday's game against the Lions at Detroit. (Dec. 26, 2016) 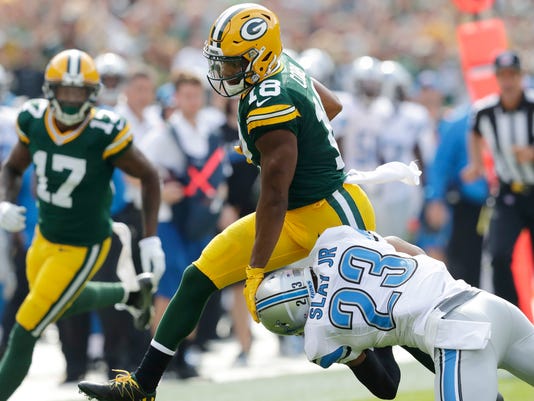 GREEN BAY - It’s uncertain whether Green Bay Packers receiver Randall Cobb’s sprained ankle can heal by Sunday — he certainly wasn’t revealing how it felt Monday — but giving it more time to recover was a big reason he was inactive against the Minnesota Vikings.

Cobb tried to play through the injury Dec. 18 at the Chicago Bears, but acknowledged he “obviously” was limited. He had no catches and was targeted only once against the Bears despite playing 51 snaps (84 percent).

“It was just really the fact of just having to tell him no,” Packers coach Mike McCarthy said. “… I think we took a leap there in Chicago, because Randall’s not going to come out of the game. Let’s be honest, you’re going to have to chain him down to keep him off the 46. But hopefully, we can get him ready for Detroit.”

Cobb wouldn’t discuss how his ankle feels, saying only that each day he's trying to figure out what he can and can’t do on it.

He wanted to play Saturday against the Vikings. After playing each game the past two years, it was the second game he has missed this season. Ultimately, he said, the chance to be healthy for the Packers' winner-take-all NFC North title game Sunday in Detroit was a key selling point.

“That’s what we’re hoping for,” Cobb said. “That was one of the reasons that I was inactive this past week. We’re hoping for progress through the week and be able to go on Sunday.”

If Cobb isn’t healthy enough to be effective against the Lions, the Packers might have a suitable alternate with receiver Geronimo Allison.

The undrafted rookie has jumped ahead of third-year veteran Jeff Janis and fifth-round rookie Trevor Davis on the Packers' depth chart. He played a season-high 43 snaps (73 percent) against the Vikings, and was a legitimate target on the field. Allison caught four of the seven passes Rodgers threw to him, finishing with 66 yards.

“When he gets an opportunity,” McCarthy said of his rookie, “he gets in there and makes plays. I can’t really say enough about him.”