Opposite Sideline: Giants as hot as Packers

The lowdown on the Green Bay Packers' next opponent from a beat writer who covers the team.

Opposite Sideline: Giants as hot as Packers

Aaron Nagler of PackersNews.com speaks with Art Stapleton of The Record about the New York Giants and their showdown with Green Bay. 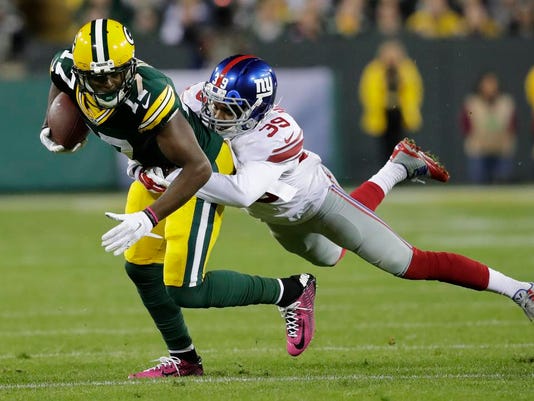 The lowdown on the Green Bay Packers' next opponent from a beat writer who covers the team.

The New York Giants head to Lambeau Field on Sunday a confident group despite their loss in that building a few months ago. The Green Bay Packers will try to avoid a third heartbreaking playoff loss to the Giants.

We caught up with Art Stapleton, who covers the Giants for The Record, and got his thoughts on Sunday’s matchup. You can find his answers to our questions in the video above and more in the text below.

1. What has been the biggest factor in Eli Manning's struggles this year?

'His inaccuracy stems from his lack of trust that his offensive line, especially on the edges, can hold up long enough for the wide receivers to get open. It's been a stampede far too often with a lack of a consistent running game."

2. How much will Steve Spagnuolo have to blitz to try and get to Aaron Rodgers?

"I think the Giants will rely on their secondary to cover up, which should allow Spagnuolo to come from different angles. His blitz percentages are not as high as you'd think, but the diversity in those blitzes make them effective."

3. Who has been the unsung hero of the Giants during their great play down the stretch?

"I'll give you two names: Damon 'Snacks' Harrison, who leads defensive tackles in run stops by a wide margin, and Dominique Rodgers-Cromartie, who has six interceptions, five coming in the second half of games, including three in the end zone in the final two minutes of victories."