Packers' momentum could fade in playoffs

Two of the most popular talking points during the playoffs of any sport are previous matchups between teams involved and the momentum, or lack thereof.

Packers' momentum could fade in playoffs 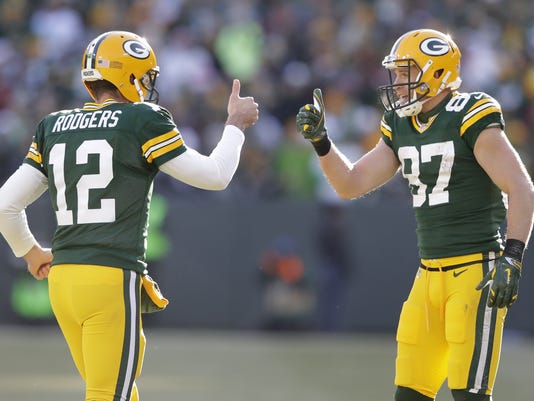 GREEN BAY — Two of the most popular talking points during the playoffs of any sport are previous matchups between teams involved and the momentum, or lack thereof, that each side carries into the postseason. In other words, have Team A and Team B played before? And regardless of that answer, which of the teams is hottest right now?

When it comes to the Green Bay Packers and New York Giants, who play in the NFC wild-card round this weekend, the correct responses are “yes” and “the team led by quarterback Aaron Rodgers.”

The Packers and Giants met at Lambeau Field in Week 5 of the regular season, a game so outdated that the Packers’ four-game losing streak had yet to begin and the Giants’ defense still seemed mortal. Rodgers played a subpar game but his team won anyway: Green Bay 23, New York 16.

That game, coupled with the six-game tear that saved the Packers’ season and launched them into the playoffs at warp speed, raises two questions ahead of the Sunday afternoon kickoff: Do previous matchups have any influence on the opening round of the playoffs? Does a winning streak inspire confidence for the postseason?

“It does in here,” Rodgers said. “It does a lot in here. Because guys have confidence and there’s an expectation that you’re going to win. Whereas before, it was … hope. You just kind of hope you’re in the game in the fourth quarter and you can pull it out, during that rough stretch where you’re kind of up and down, every game riding the roller coaster. Now, there’s an expectation that when we take the field we’re going to come away with a W.”

Confident though the Packers may be, teams that string together wins at the end of the regular season have not performed particularly well in the playoffs of late.

Ten teams have entered wild-card weekend with win streaks of five or more games since 2000. Three of those teams lost immediately. Four of them won just a single game. Two advanced to their conference championship games.

The lone exception was the Baltimore Ravens, who ended the 2000 regular season with seven straight wins. They rode their ferocious defense to four more wins and a Super Bowl title.

“You just have to make sure you don’t look at those things that are minor. They don’t mean anything. It just matters who is going to show up on Saturday or Sunday, whenever the game is, and who is going to play better.”

RELATED:Giants as hot as Packers

While Daniels downplayed the importance of momentum, some of his teammates spoke favorably of the buzz generated by turning a potential 4-6 disaster into 10-6 and a division title.

Added safety Morgan Burnett: “We feel red hot with just the type of season we had to turn that around. You’ve got to feel good going into the playoffs. Just the adversity we’ve been through and the way that we overcame it, I think that’s the great thing about it and it shows the character of our team. That gives you a lot of confidence going into the playoffs and that’s what you need because now every team you go against is a really great football team.”

What players do agree on is the lack of importance they place on the previous meeting with the Giants on Oct. 9, a point in the year when both depth charts bore significant differences and neither team had hit its stride. The statistics back them up.

Since the year 2000, the wild-card round has featured 39 rematches between teams who met at least once earlier in the year, and the results of those pairings slightly favor the team that won during the regular season.

To put it simply, teams that won the regular season matchup — or swept a pair of games against division opponents — went on to win the wild- card rematch 58 percent of the time.

“Everything changes,” inside linebacker Joe Thomas said. “We treat this as a brand-new opponent. They have different players back now on both sides of the ball, so it’s a different opponent.”

Added center JC Tretter: “It’s always nice to watch yourself play and watch what (the opponent) did to you because most of the time you’re trying to project. … But no one does less film study now. You do the same amount of film study, if not more, as we go on throughout the days and weeks. I don’t think the preparation changes at all.”