Whether that endorsement translates to job interviews might hinge on Van Pelt's contract as much as anything. 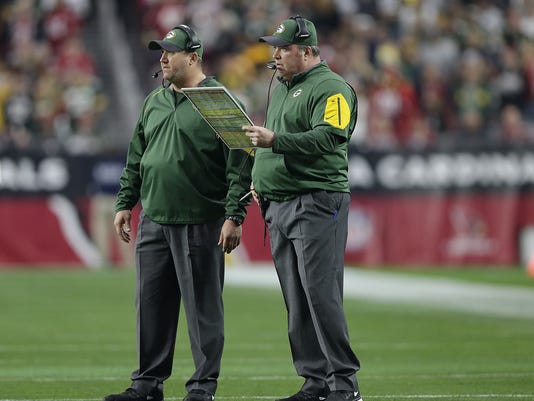 "It’s a close relationship," Rodgers said during a press conference Wednesday. "We’ve worked together for a few years now, and I just have a lot of respect for him as a coach, as a person, as a confidant. He’s a great gameday manager, giving me exactly what I need and nothing more."

Van Pelt, 46, joined the Packers in 2012 after working previously with the Tampa Bay Buccaneers (2010-11) the Buffalo Bills (2006-09) and the Frankfurt Galaxy (2005). He spent two years coaching running backs under Mike McCarthy and took over the quarterbacks in 2014 after Ben McAdoo took a job as offensive coordinator of the New York Giants.

RELATED: Rodgers right at home on road in postseason

Now, according to Rodgers, Van Pelt is worthy of the same kind of job McAdoo took after his time with the Packers from 2006-13.

"He cares about it," Rodgers said. "The guys puts a lot of work into it. He’s a great coach. There’s no reason why his name shouldn’t be about there for coordinator spots right now."

Their closeness was reflected in Van Pelt's comments during the early part of the year, when the offense appeared disjointed and Rodgers was one of the reasons why. As the quarterback limped through the first half of the season, Van Pelt was asked repeatedly about potential issues with mechanics or impatience with wide receivers.

The questions, which began as early as Week 3 after the Packers lost to the Minnesota Vikings a few days prior, afforded the coach ample opportunities to stick by his quarterback, and he always did.

"The beauty about Aaron is he’s just such a competitive guy,” Van Pelt said in late September, "and my history is if he has a down day he’s going to bounce back. That’s what we’re expecting."

To his credit, Van Pelt was adamant about an impending turnaround all season. On Oct. 13, after the Packers began 3-1 but Rodgers had yet to top 259 yards in a game, Van Pelt assured reporters "we'll get this thing turned around." Even in the darkest of moments, he did not think anything was wrong with his star pupil.

"I don’t know if there is anything wrong," Van Pelt said in mid-October. "It’s the game of football. It’s not — he’s not going to roll it out there every day and be perfect, be Superman. I mean, I think the standards have been set — and he set them. I mean, he’s played some fantastic football, and he will play fantastic football moving forward. Just right now, we’re in a little bit of a lull, we’re trying to get out of it.

Sure enough, the tide reversed course in the second half of the year. The Packers rode a six-game winning streak into the playoffs and have added two more since. Were the Most Valuable Player award judged by the last three months, Rodgers would have won in a landslide. That he still might win is a credit to his dominance in November, December and January.

Part of that credit belongs to Van Pelt, which is why Rodgers spoke so highly of him Wednesday afternoon.

"He’s done a great job for us," Rodgers said. "And he and I have become very close."

Whether that endorsement translates to job interviews might hinge on Van Pelt's contract as much as anything. Unless Van Pelt's contract is set to expire after the season, McCarthy and general manager Ted Thompson have the right to block opposing teams from meeting with Van Pelt. It's something they have done a number of times in the past for both coaches and front office executives.

When it comes to coaches, McCarthy and Thompson have denied Tom Clements, Edgar Bennett, Joe Whitt Jr., Darren Perry, James Campen and McAdoo chances to interview over the years.

Van Pelt joined that list in January of 2015, when a source told the Journal Sentinel he was prevented from meeting with the St. Louis Rams about their vacant coordinator position.

Perhaps this offseason will be different.