Vote for the top play of the Packers' regular season

With the final list down to three, cast a vote for the top play of the Packers’ regular season.

Vote for the top play of the Packers' regular season 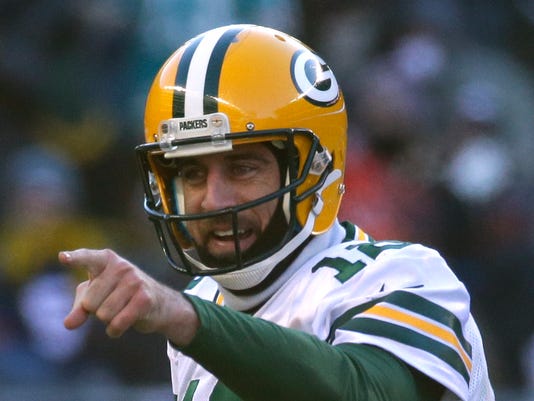 The Green Bay Packers’ 10-6 regular-season was capped with a six-game winning streak, an improbable run quarterback Aaron Rodgers said was possible in late November. It comes as no surprise that the top plays of the 2016 regular season took place during the season-ending streak.

With the final list down to three, cast a vote for the top play of the Packers’ regular season. Vote for your favorite top play here or on this page (note: some users may need to click refresh to see the poll):

Aaron Rodgers and Jordy Nelson are the most prolific quarterback-receiver scoring tandem in the storied history of the Green Bay Packers.

They added to their legacy this season with a non-touchdown pass that will go down in team annals against the franchise’s arch-nemesis: the Bears.

Rodgers and Nelson have a special connection, a chemistry developed over 10 seasons playing together. Like so many times before, Rodgers looked for Nelson on the final drive with the game on the line in Chicago. The duo delivered.

Tied, 27-27, with 31 seconds remaining from the Green Bay 27, the Packers faced 3rd-and-11. Overtime looked almost certain, but Rodgers went for it. Against “quarters” coverage with no safety deep in the middle of the field, Nelson was pitted one-on-one with rookie cornerback Cre’Von LeBlanc — a tremendous mismatch in both speed and experience.

Rodgers took full advantage. Nelson ran a post and raised his hand, signaling for Rodgers he was open and to launch it.

The bomb was thrown “inside” on the post pattern, away from the defender with only Nelson able to make the catch. Sixty yards later, Nelson did just that and fell to the ground.

Two plays later kicker Mason Crosby then booted the game-winner from 32 yards for a 30-27 victory.

“It was just Aaron Rodgers buying time and a good throw and good catch,” Chicago cornerback Tracy Porter told the Milwaukee Journal Sentinel. “(Nelson) was able to run a post and run away from the corner and Cre’Von (LeBlanc) was in good position on being on top of the receiver in the coverage we were playing. It’s just that he had an entire field (to cover) and Aaron was able to throw the ball away from him and Jordy made an adjustment on the ball.” 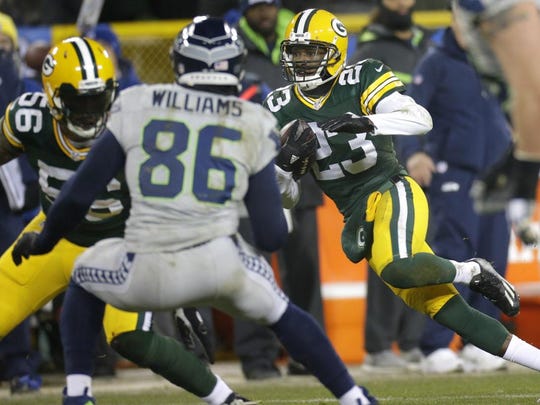 Randall had a season of highs and lows, dealing with injuries and inconsistent play. The highlights were his game-sealing tackle in Jacksonville and his two-interception game against Seattle at home.

The Packers’ defense ignited the team’s most impressive victory of the regular season with five interceptions of star quarterback Russell Wilson and limited the potent Seahawks offense to a single touchdown.

Dom Capers’ maligned unit had been sliced and diced in the previous four games, giving up 33 points in Atlanta, 31 to Indianapolis, 47 in Tennessee, and 42 in Washington.

Randall made the highlight reels with his interception near the goal line in the final 30 seconds of the first half with Green Bay leading 21-3 to crush any hopes of a Seattle comeback.

Wilson tried to make a big play to close that deficit before intermission, scrambling out of the pocket to launch a 40-yard pass to a wide-open Doug Baldwin at the 3-yard line.

But Randall swooped in at full speed and jumped up to grab the football out of the air at the 4. His momentum carried him into the end zone, and he then showcased his running skills and returned the ball to the Green Bay 22-yard line.

In the locker room, safety Ha Ha Clinton-Dix called it a statement game for the team. “We all came out and played great,” he said. 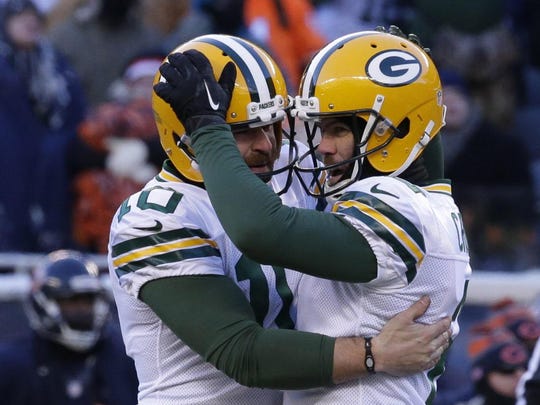 It proved to be plenty of time for Rodgers and the Packers offense, which began the game-winning drive at their own 27-yard line with 1:19 left. The Soldier Field crowd was screaming for a defensive stop to force overtime and the opportunity for a Chicago upset.

Rodgers and head coach Mike McCarthy went to the air for the win. There were no knee-downs or handoffs to Ty Montgomery, who had already ripped the Bears defense for 162 yards on 16 carries and two touchdowns.

Two pass plays lost a yard. On third down and 11, Rodgers heaved a high pass down the middle of the field to a streaking Jordy Nelson. The veteran receiver ran his patented post pattern and beat one-on-one coverage to snare the perfectly thrown football with two hands as he fell to the turf.

After Rodgers spiked the football at the three-second mark, Crosby booted the ball through the uprights, but Chicago called timeout just before the snap. It did not faze the 10-year veteran.

Crosby calmly blasted the football 32 yards through the uprights for a 30-27 walk-off victory in cold and gusty Soldier Field.

“The fact that I had a 32-yard game-winner, that definitely wasn’t in my mindset there,” said Crosby, who was mobbed by his teammates. “I was preparing for a long one. So it was nice ... the wind was blowing pretty hard right to left there. But from that distance, I just said I’m going to aim hard right down the middle.”

“Best kicker in the league,” Rodgers said of Crosby.

With the victory, Green Bay improved to 8-6 and took control of their playoff destiny.

Packer Plus is published 40 times a year by the Milwaukee Journal Sentinel.