Fourth in a series looking at the Green Bay Packers’ unrestricted, restricted and exclusive-rights free agents. 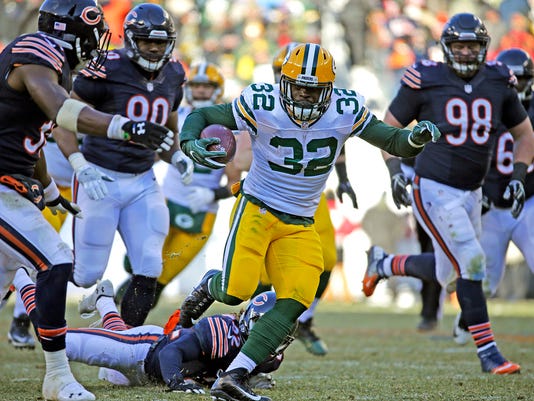 Green Bay Packers running back Christine Michael (32) picks up 42 yards and a touchdown in the third quarter during the Packers' 30-27 win over the Bears on Dec. 18, 2016 at Soldier Field in Chicago.(Photo: Rick Wood/Milwaukee Journal Sentinel)

Fourth in a series looking at the Green Bay Packers’ unrestricted, restricted and exclusive-rights free agents in advance of the start of the 2017 league year and NFL free agency March 9.

GREEN BAY – On one play late in the third quarter at Chicago, Green Bay Packers running back Christine Michael showed why NFL teams keep coming back for more.

With a cut three yards behind the line of scrimmage, Michael was a blur through the right side of the Packers’ offensive line. He was four yards downfield before Bears defenders even noticed, making another cut out of the hole.

His speed swallowed up the Bears’ defense. Cornerback Cre’Von LeBlanc missed a tackle because Michael’s burst forced him to take a bad angle. Michael outran the lone defender between him and the end zone, cutting left across the field to evade Bears safety Adrian Amos.

By the time Michael hit the 15-yard line, teammates were lifting their hands signaling a touchdown.

Michael’s lone touchdown with the Packers was an emphatic, explosive 42-yard run worthy of any highlight reel. It was the kind of play that fit Packers running back coach Ben Sirmans’ description.

“He’s a very sudden back,” Sirmans said, “at (everything) he does. And he’s got this, I guess this instinct to try to create and make the big play. Even if things break down, he just feels like, ‘Man, I can still make something happen.’”

There’s a catch, of course. That same big-play instinct can get running backs in trouble. Michael’s biggest strength – his full-throttle explosiveness – can become his greatest weakness.

Michael often plays like a balloon with the air being let out. Everything he does on a football field is fast, sudden, explosive. But good luck figuring out where he’ll end up.

The lack of consistency can get frustrating for teams.

Michael will become a free agent next month when his one-year, $725,000 contract expires. His market is unlikely to be robust, but the Packers must decide whether the 26-year-old journeyman fits what they need in the backfield. He played six games in Green Bay after the Seattle Seahawks released him in November, rushing 31 times for 114 yards.

Michael finished 2016 as the Seahawks’ leading rusher, and his six touchdowns in Seattle were double the production of any other runner on their roster. But the Seahawks sent him away for a second time a week before Thanksgiving.

Now the Packers must decide whether they can harness Michael’s raw potential into a disciplined tailback. It’s clear they need all the playmaking they can get at the position. The Packers will enter free agency with Montgomery as the only tailback on their roster, with Eddie Lacy’s contract also expiring.

Michael’s talent and potential are easy to see. Just as clear is the inconsistency that so far has prevented him from finding a long-term home. That’s the decision the Packers will have to weigh this spring.

The snaps: Played six games with no starts after Packers claimed him.

The stats: Led Seahawks in rushing last season with 469 yards, six touchdowns; rushed for 114 yards and a touchdown with Packers.